A Treat for Jazz Fans. New Orleans Jazz Trumpeter, George Girard, became a professional musician at the age of 16. He toured with several bands before cofounding The Basin Street Six. Composed mainly of friends he had grown up with, the band included clarinetist Pete Fountain. Girard became dissatisfied with the band, and broke them up in 1954 to form "George Girard and the New Orleans Five. Seemingly destined to become a legacy in jazz for years to come, sadly Girard became ill with cancer, and had to stop playing in 1956. He died in New Orleans on Jan. 18, 1957. 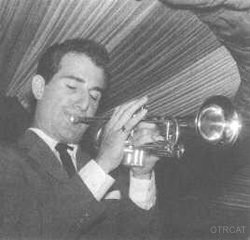 The Armed Forces Radio Service is the predecessor of AFRTS, (which would become the American Forces Network,) serving American Service men and women and Ships at Sea the world over. Prior to WW2, there were several bases that had small radio stations to bring the troops a reminder of home. Locations included places such as Alaska, Panama, and the Philippines. In 1942, these stations were combined by the War Department as the Armed Forces Radio Service.  On July 4, 1943, using equipment borrowed from the British, the Army began broadcasting to US Troops preparing for the invasion of Nazi-occupied Europe. AFRS programs were enormously popular with the troops. Much of AFRS's success was due to the participation of Radio and Film stars who donated their time to the network free of charge. Popular shows included Mail Call and Command Performance which featured the talents of Bing Crosby, the Andrews Sisters, Bob Hope, Jack Benny, Red Skelton, Dinah Shore, and many others. By the end of the war there were nearly 300 AFRS radio stations worldwide (thought the number dropped dramatically in the post war years.)