Although little-known beyond fans of Big Band Music and OTR, Maxine Gray's story is filled with survival and even success despite nearly crippling injuries and long odds.

Choose your CD format
or order disks individually: Add to Cart Add to wishlist
Play a sample episode from May 29, 1940:

Los Angeles had been experiencing a boom since water began to flow from the Owens Valley at the beginning of the Twentieth Century, and that boom only slowed moderately when the Great Depression came. People from regions that the Depression had devastated saw California and Los Angeles in particular as the Promised Land. By the late Thirties and early Forties,folks in Los Angeles could feel in their bones that their boom would not only continue but grow to epic proportions. 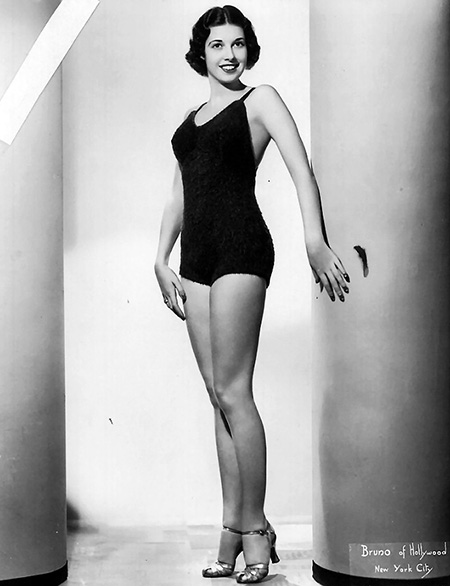 One who had terrific confidence in Los Angeles was Don Lee. In 1919, he bought the Earl Automotive Works in Hollywood (Harley Earl moved on to become the head of General Motors' styling department). The Don Lee Coach and Body Works not only held the Cadillac concession, the company was well known for developing customized Caddy's for movie stars and studio execs. Lee bought radio station KFRC in 1926 and relocated the broadcasting equipment to the top floor of his Cadillac dealership on Van Ness Ave. An early pioneer in TV broadcasting, Lee placed a broadcast tower for W6XAO atop the mountain above the famous Hollywood Sign. The Don Lee Network was off and running and would soon have affiliates up and down the West Coast.

Don Lee dropped dead of a sudden heart attack in 1934, leaving his son, Tommy Lee, to run the Cadillac sales and the Don Lee Network. Tommy wanted nothing more than to be a dancer and spent his evenings at the Cocoanut Grove Club at the Ambassador Hotel. When the Hal Kemp Orchestra played the Grove in 1938, Tommy took one look at Kemp's girl vocalist, Maxine Gray, and found something he wanted even more than becoming a dancer.

Maxine was born in Shreveport, Louisiana (around 1914). The family moved to Dallas after Maxine graduated from high school. She got a job singing on WFAA's "Early Bird" program. Her big break came when another early riser named Lawrence was visiting the station. Lawrence had decided he wanted to pursue a career in music and convinced his father to loan him the $400 for a mail-order accordion. In exchange, Lawrence would work on his father's North Dakota farm until he turned 21, impressing Lawrence's early rising habits. Lawrence was leading a dance music orchestra and invited Maxine to join them on the road.

Lawrence's outfit played very "sweet' Jazz when compared to other popular acts of the time like "hot" bands behind Duke Ellington or the Dorsey Brothers. The two cars which Lawrence's band traveled (and basically lived in) were made even more crowded by Maxine's mother, who naturally chaperoned her daughter. When they played the William Penn Hotel in Pittsburgh, Lawrence found an abandoned bubble machine backstage. Since his brand of sweet music had been described as "champagne-like", the bubble machine became a permanent part of the show, and, although the term had not been coined yet, Maxine became Lawrence Welk's very first "Champagne Lady".

A friend convinced Maxine and her mother that future success was not on the road with Welk ('He'll never last") but on the radio in Chicago. The Windy City's gangster reputation weighed heavily on their minds, but the chance to work with Jan Garber, "The Idol of the Airwaves" seemed too good to pass by and she parted with Welk on good terms. Unfortunately, Garber did not like "girl singers" and fired her within the week. 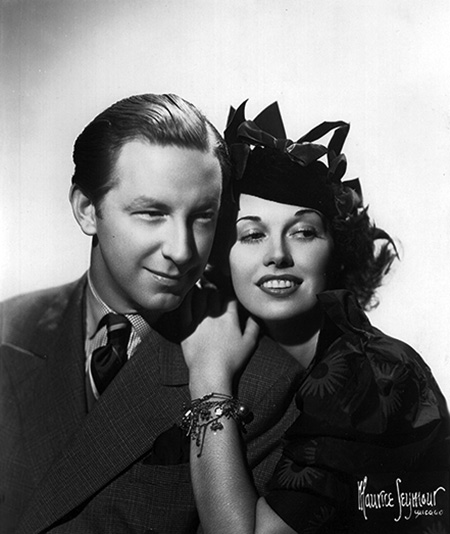 Fortunately, Ted Weems was more enthusiastic about girl singers, and after a hasty audition asked Maxine if she could start that night. Her mother had sewn several gowns for her, so she was able to go on. Unfortunately, Weems only paid $25/week, which barely covered their hotel room and food for her mother, Maxine lived on sandwiches ordered by the band. While they were playing the Bismarck, Hal Kemp's manager invited her to come over to the Blackhawk Restaurant after the show. The Blackhawk was the home of Kemp's Midnight Flyers (NBC, 1932-33) broadcast, so when Maxine arrived the joint was still jumping. Finally, arranger John Scott Trotter sat down at the piano and played a pair of songs which were totally inappropriate for Maxine's vocal range.

After the audition, Maxine went back to the hotel and cried, but Kemp and his manager called the next day to apologize for Trotter's song choices and ask her to join their outfit. When Kemp left the Blackhawk to begin touring again, Maxine remained behind to help break in Ginny Simms for Kay Kyser's band while Kyser was developing his "Kollege of Musical Knowledge" show. When she rejoined Kemp's orchestra, they played posh clubs and hotels across the country. She later recalled leaning out of her hotel window to watch the Hindenburg fly over. She became close friends with Kemp and Skinnay Ennis, as well as her other bandmates.

When the Hal Kemp Orchestra began playing the Cocoanut Grove in Los Angeles, Maxine and Tommy Lee became inseparable. For a short time, Maxine became "the first lady of television" as Tommy put her on pioneering broadcasts over W6XAO. All too soon, it was time for the band to return to Chicago.

As the St. Louis Limited was thundering north through the night towards Chicago on February 22, 1938, Maxine's intuitions were giving her disturbing signals. Unable to shake off a premonition of disaster, she carefully went to the lady's room at the end of the car. As she was leaving the facility, the locomotive struck a truck at a suburban crossing. The demolished truck was pushed for two blocks before the train came to a stop, and five of six coaches had left the tracks. Most of the sleeping band members suffered only bumps and bruises. Kemp, who was in the men's room at the front of the car was uninjured. Maxine was thrown the length of the car, landing, unconscious, under some seats. She did not awaken for three days.

When Maxine awoke with a broken back, injuries to her foot, and still feeling the effects of her concussion, she also had a 105f fever. On top of everything, she had contracted measles. Kemp continued to pay her during her recovery (the band's insurance covered the expense), and she rejoined the band in New York. However, the Kemp organization was about to see some changes. Skinnay Ennis quit, and Kemp fired Trotter and Maxine. The reformed Hal Kemp Orchestra would become the house band at the Cocoanut Grove and the Mark Hopkins Hotel in San Francisco. While commuting between the gigs in December 1940, Kemp's car struck a truck in the fog and he died of complications. 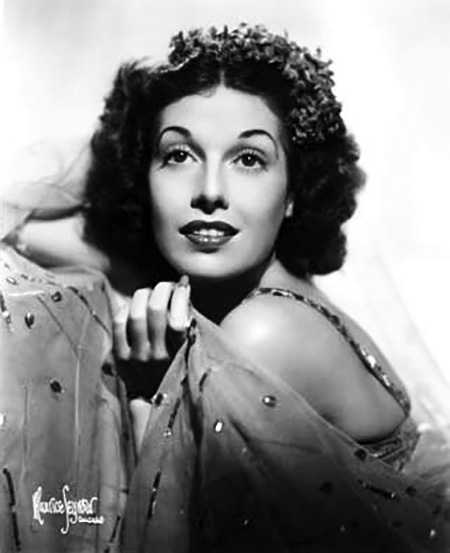 Ennis would form his own band and become an important part of Bob Hope's radio program, and Trotter was hired to arrange and sing back up for Bing Crosby (he also scored the early Peanuts TV specials). Maxine, still using a back brace and having trouble remembering lyrics because of her concussion, was heartbroken and humiliated over the firing. When word of her plight reached Los Angeles, Tommy Lee sent word, "Don't worry. You come back here, and I'm going to fix you with the most gorgeous band you'll ever have!"

That is just what happened as Alvino Rey Presents was built around her singing and Rey's playing. Guitarist Alvino Rey attracted some of the hottest talents in Southern California, most notably Luise King of the King Sisters Singers. Rey naturally began working with his new in-laws, and the show was reformed as Maxine Grey Entertains. Tommy Lee's greatest producing success would be California Melodies which ran on Mutual from 1942 until 1948.

Maxine acknowledged Tommy Lee as "the love of my life", although the relationship was doomed to tragedy. Lee contracted a cancer of the brain which radically changed his behavior. He "went berserk" and attacked Maxine on at least two occasions, nearly killing her. He was declared mentally incompetent in 1948 and the Don Lee Network sold to General Tire. Moving on, Maxine married Todd Ford and had two children with him. While Lawrence Welk was establishing his show on KTLA he had to undergo major surgery. Unfortunately, Welk's family was still located in Chicago, so Mrs. Todd opened her home to the Champagne Music Man during his recovery. When the Welk Family developed the Welk Resort and Champagne Village a few miles north of Escondido, California, Welk turned to his first "Champagne Lady" help establish the resort's gift shop.

Sadly, Maxine and Todd's marriage ended in divorce. Ready to take a break from California, Maxine was offered a job running a music store in Honolulu. By the time she had made the move to Hawaii with her young children, the owner of the shop had passed away and the music shop closed. Maxine was forced to pawn her jewels to feed the kids, and for a time worked as one of Honolulu's first Private Investigators. She soon got on her feet, got a job running a pair of Zales Jewelry stores in Hawaii, and started investing in real estate. Maxine Gray Ford died quietly in her sleep on July 17, 2006. She was 92.