She began her entertainment career at the age of three, she later became a popular guest on variety show and on the nightclub circuit.

Choose your CD format
or order disks individually: Add to Cart Add to wishlist
Play a sample episode from November 01, 1938: 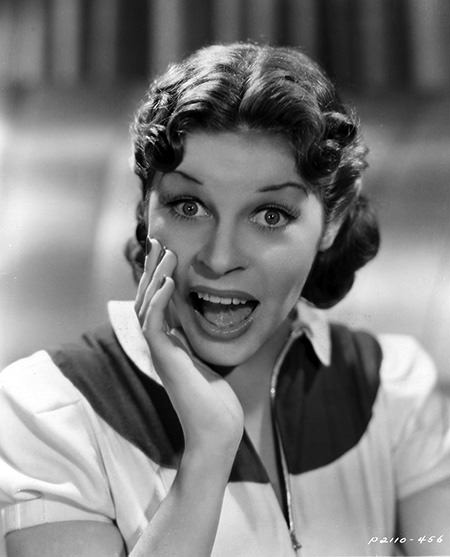 In the publicity material that Hollywood created for her, Martha Raye was always "the Big Mouth". To the Army Special Forces troops serving in Vietnam, she was "the Big Heart", their beloved Colonel Maggie.

Bob Hope’s efforts for the USO are the stuff of legend, of course. He was tireless in bringing his show to the troops during WWII and continued until the Gulf War. By the time he was entertaining the troops in Vietnam, his shows were huge affairs featuring a laundry-list of Hollywood Stars. Along with the entertainers, there would be several cameras so that the whole thing would be recorded and broadcast back "in the World". Hundreds of soldiers, sailors and airmen would have the privilege of seeing Bob and Company live and in person, but many of these servicemen were in fact support personnel, or what the grunts in the field referred to as REMFs, "Rear Echelon M***er-F***ers". When the show was over, Bob and all the pretty girls would get on an airplane and fly back to Hollywood.

Martha Raye, for all of her talent and dedication to making people laugh, would never be as big a name as Bob Hope, and her USO shows in The Nam were not as big, but she did a lot of them. Raye flew to Vietnam at least once a year from 1964 through 1972, staying "in-country" for as long as six months at a time and often traveling at her own expense. Sometimes traveling with just a guitar player and a bassist as accompaniment, many of her shows simply used the back of a flatbed truck for a stage, and she would drive or drive into Forward Operating Bases (FOBs) and A-Team Firebases to be with the men. It was not uncommon for these small outposts to come under enemy fire while the entertainers were there. The shows were not broadcast on TV back in "the World", but plenty of soldiers have treasured snapshots taken with Colonel Maggie.

President Johnson presented Martha Raye was a Green Beret and a certificate designating her an honorary member of the Special Forces. The Geneva Convention status on her Department of Defense ID listed her as having a rank equivalent to a Lt Colonel, and in the field she wore green fatigues with a nurse’s caduceus and Silver Oak Leaves.

Born Margaret Teresa Yvonne Reed in the charity ward of the St. James Hospital in Butte, Montana, 1919, her mother was back on stage within two days of giving birth. The little troupe which originally billed themselves as Reed and Hooper lived much of the time "in an old Pierce-Arrow which my father drove…. We put the scenery in the back seat and that was where we slept at night." Little Margie got started early: "I didn’t work until I was 3. But after that, I never stopped." 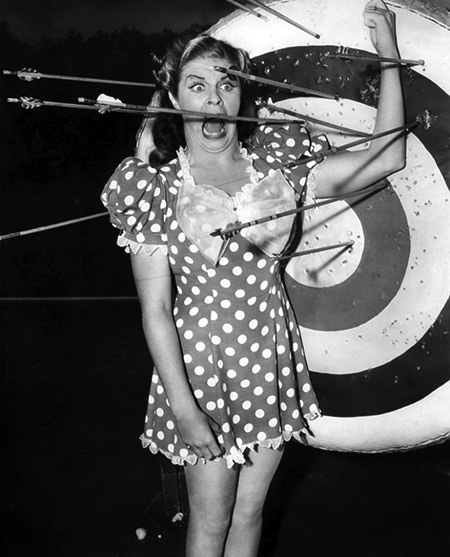 By the time she was 15, she was singing with different dance-bands. She picked the name Martha Raye out of a phonebook and made her first film appearance in 1934 in a band short titled A Nite in the Nite Club. In 1936, she signed with Paramount where she was used in comic roles because her mouth was large in proportion to the rest of her face. She was a regular on Al Jolson’s The Lifebuoy Program from 1936-1939.

Martha signed up with the USO practically before the smoke cleared from the Pearl Harbor attack. She spent the War appearing in numerous camp shows and appearing on AFRS programs like Command Performance. In 1944, she starred in Four Jills in a Jeep with Kay Francis, Carrie Landis, and Mitzi Mayfair. It was the story of the "Feminine Theatrical Task Force" and their camp show tour through England, Ireland, and North Africa.

After the War, Martha’s movie career never really took off again. Television, however, was just the medium she needed, until she got her own show. Milton Berle introduced Martha Raye to television audiences and her star began to rise as she became a popular guest on variety show and on the nightclub circuit. Her personal life was a shambles. Martha would marry seven times and divorce six. She had a terrible fear of flying, which she had to do to get between engagements. Her coping mechanism was to drink heavily before boarding the aircraft, which resulted in several carriers refusing her service.

In 1954, The Martha Raye Show was in the NBC Fall lineup. The hour-long comedy variety show drew a wealth of guest talent. On the September 20, 1955, episode, one of the guests was Gloria Lockerman, a 12-year-old African-American girl who had won The $64,000 Question. Martha and featured guest Tallulah Bankhead greeted Gloria with hugs and kisses. Protest letters began to pour in and the show began to lose ratings. It was canceled after May 29, 1956.

Her fifth marriage was breaking up at about the same time, and on August 14, 1956, she attempted suicide by overdosing on sleeping pills. While in recovery, well-wishers sent her a St. Christopher medal and a Star of David, amulets that she would wear for the rest of her life, even though she was neither Roman Catholic nor Jewish. While she was in Vietnam, whenever she came across a soldier who did not have a St Christopher medal, she had one to give him. 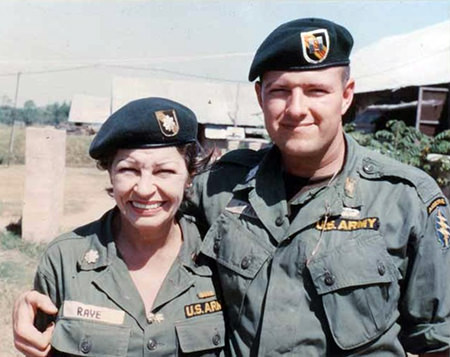 Martha’s final years were marked by failing health. She suffered from Alzheimer’s disease and circulatory problems. Her home was destroyed by the 1994 Northridge earthquake, and she and her seventh husband, Mark Harris, moved her hospital bed to a hotel.

Because of her service with the USO, she was offered a final resting place in Arlington National Cemetery, but Colonel Maggie made another request, which was granted. Martha Raye, as an Honorary Green Beret, was buried in the post cemetery at Fort Bragg, North Carolina, with almost full military honors (Taps was not played and the volleys were not fired, although a Flag was draped over her casket and she had a full Honor Guard). She is the only woman buried in the post cemetery.