A summer replacement for Fibber McGee and Molly, Hap Hazard throws bad puns around at a rate that would embarrass Fibber himself.

Choose your CD format
or order disks individually: Add to Cart Add to wishlist
Play a sample episode from July 28, 1941: 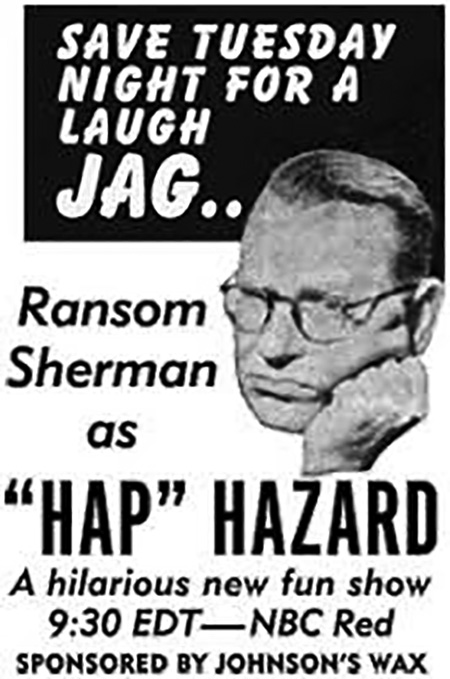 The Johnson Wax Company gave Jim and Marian Jordan summers off from Fibber McGee and Molly, which meant that a summer replacement series was needed every year. In 1941, the replacement was Hap Hazard, based on a character invented by comedian Ransom Sherman for his Matinee Club program. The summer series may have served as an extended audition for a Hap Hazard series during the regular season. Sherman left hosting duties of Matinee Club to his protégé, Garry Moore. He apparently made a good impression on the Johnson Wax production team; during the 1943 season, Sherman joined the Fibber cast as Molly's seldom-sober Uncle Dennis.

The Hap Hazard Show was a situation comedy featuring Hap as the manager of Crestfallen Manor. He has a crush on the hotel's owner, Kitty Carson, and leads a staff of amusing incompetents. Hap throws bad puns around at a rate that would make Fibber himself blush. Announcer Harlow Wilcox and Billy Mills and His Orchestra stuck around for the summer, and Crestfallen Manor even gets a visit from Throckmorton P. Gildersleeve.

Gildy does not make the move to Summerfield and Kraft Food until the end of the summer, so at this point, Harold Peary is playing the Wistful Vista Gildersleeve and Hap drives him nearly as crazy as Fibber did. The episode's plot has Gildy as an appraiser for a big Eastern Hotel chain, the Stop and Flop Inns.