Sometimes referred to as the second greatest writer of English after Shakespeare, George Bernard Shaw saw the transformations of society from the Victorian Age through the post-WWII period.

Choose your CD format
or order disks individually: Add to Cart Add to wishlist
Play a sample episode from March 26, 1955: 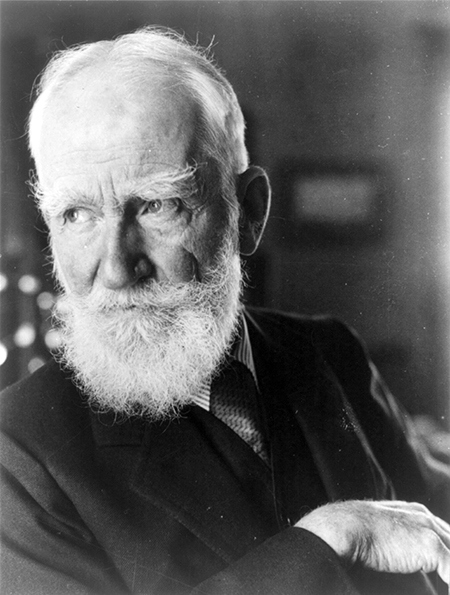 To study English literature is to expose oneself to some of the masters of the language. English lends itself to the expression of ideas and emotions, and many authors have mastered this art, but there is a notable few who can only be called Giants of English literature.

Scholars debate endlessly about who should be included on this list of Giants, but most would agree to list Jane Austen, Geoffrey Chaucer, Mark Twain from America, Milton, and Charles Dickens. At the top of the list is, undoubtedly, the Bard of Avon, William Shakespeare. The figure many would place second only to Shakespeare is George Bernard Shaw.

Like many important writers, Shaw was contrary and opinionated. The strength and passion of his convictions are part of what made his writing so memorable. Like Chaucer, Shaw was a fabulist, and many of his works have lessons for their intended audience. Like Shakespeare, Shaw was a dramatist, which meant that his words were meant to be heard as well as read. As passionately and effectively as Shaw expressed his ideas and opinions, he was not afraid to change them as time and circumstance shifted. When they did shift, his expression of his new position was sure to be even more passionate and effective.

Unlike many greats of English literature, Shaw was not British. Rather, he was Irish, although of English descent and born into the Protestant Ascendancy. George Bernard Shaw was born in a lower-middle-class portion of Dublin, 1856, his father a ne'er-do-well public servant who found a sinecure and had little apparent ambition to improve his station. Shaw's mother came to despise her ineffectual and often drunken husband. Shaw attended four different schools from 1865-1871 and hated each in turn. He was doing quite well under the tutelage of some of his mother's artistic friends and chafed under the discipline of school.

After leaving school in 1871, Shaw was employed as a junior clerk at a Dublin land office, and he seemed to thrive, working hard and advancing to head cashier. He effectively dropped the George from his name at this time, styling himself as Bernard Shaw. His mother left her husband in 1873, taking her daughters to London and leaving Shaw with his father. In 1876, he received word that his younger sister Agnes was dying of tuberculosis, and he resigned from the land office and moved to London with his father in tow.

Rightly or not, Shaw placed the blame for Agnes's death on his mother. She provided him with lodgings at the house she kept with former Dublin music teacher George John Lee (one of Shaw's tutors while growing up). Shaw adamantly declined to seek clerical employment in London, but it was obvious that he needed an income. Lee hired him to ghost-write a music column printed under Lee's name in The Hornet. After securing a reader's pass to the British Museum's Reading Room the facility became almost a second home, and Shaw would spend weekdays there reading and studying whatever took his fancy and writing. During this time period, he became a vegetarian on principles (although it also aided his financial situation) and cultivated a beard to disguise smallpox scars. His first completed novel, Immaturity (1879), was too grim to be published for nearly five decades. His next two works, The Irrational Knot (1880) and Love Among the Artists (1881) were eventually published as serials in the socialist magazine Our Corner. 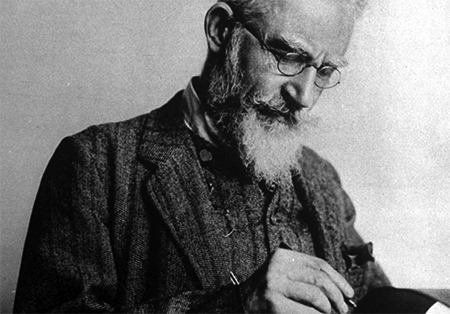 By 1883, Shaw's self-directed course of study led him to the writings of Karl Marx. He began attending meetings of socialist societies and in the fall of 1884 joined the newly-formed Fabian Society. Early the following year, he had joined the Society's executive committee and helped to write its manifesto. As the 1880's progressed, Shaw personally moved away from the revolutionary premise of Marxism and led the Fabians to embrace gradualism. This need became apparent when a rally at Trafalgar Square on November 13, 1887 ("Bloody Sunday"), was put down with violence. He composed a tract in 1890 titled What Socialism Is in which he assured his readers that "socialism can be brought about in a perfectly constitutional manner by democratic institutions".

During his time with the Fabian Society, Shaw was working as a drama and music critic for different London newspapers. He railed against the hypocrisy and conventions of Victorian English theater, and his frustrations as a critic may have been the catalyst that drove him to become a dramatist. His 1891 treatise The Quintessence of Isbenism introduced Shaw's passion for the school of realism. His first box-office success, Arms and the Man (1893), a comedy which dealt with the futility of war and the hypocrisy of human nature, was widely panned by critics who felt it sneered at heroism and patriotism (not to mention being long) but the public seemed to love it. He continued to write more plays while working with the Fabians toward a socialist agenda but had less than moderate success until the turn of the century.

The Royal Court Theatre was established in 1904, and presented nine of Shaw's plays over the next five years, including John Bull's Other Island (King Edward VII laughed so hard when he saw it that he broke his chair), Man and Superman, Major Barbara, The Doctor's Dilemma, and Caesar and Cleopatra (the basis of the 1945 motion picture starring Claud Rains and Vivien Leigh, Shaw collaborated on the film). Shaw's most popular play is Pygmalion, which is best known as the inspiration for the musical My Fair Lady. The play features a compelling romance with pointed commentary on class division and social mobility. 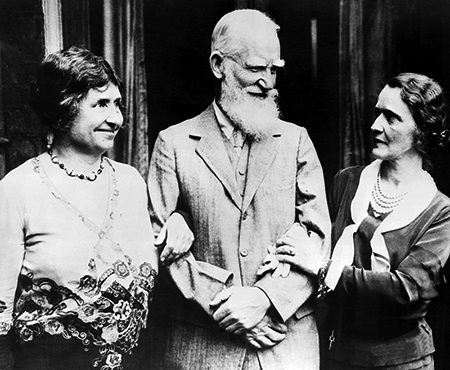 Although Shaw came out against the futility of the First World War, the government was anxious to take advantage of his powers as a propagandist. After visiting the Western front, he wrote eloquently about the plight of the common soldier. He was a longtime supporter of Irish Home Rule and supported the formation of a Commonwealth, although while working with the Fabians he largely ignored the situation, feeling it was "not a Socialist issue". Shaw was very enthusiastic about the Soviet Union from the early 1920's and expressed admiration for Lenin as a politician. He also expressed an admiration for Fascist leaders, Mussolini and Hitler, when they first came to power.

Traveling a great deal during the 1930's, Shaw found that long sea voyages allowed him the peace to write. He found the culture of California and Hollywood in particular rather distasteful, but he had great enthusiasm for cinema, collaborating on the movie adaptations of Pygmalion and Saint Joan. Many of his older plays were revived in London's West End during WWII, but Shaw could not find the enthusiasm to create new works. Now in his mid-eighties, he took refuge from the Blitz at Ayot St Laurence. In 1946, his ninetieth year, Shaw declined the Order of Merit, stating that an author's merit could only be judged after he had died. He did finally pass away on November 2, 1950, from renal failure resulting from injuries sustained while pruning a tree in his garden. He was 94.