The Story of Doctor Kildare

The story of a crusading young doctor, The Story of Dr. Kildare feature Lionel Barrymore and Lew Ayres.

Choose your CD format
or order disks individually: Add to Cart Add to wishlist
Play a sample episode from December 08, 1950: 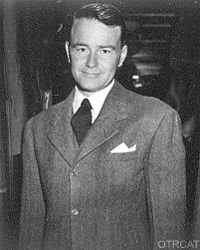 There are few heroic characters as compelling conscientious young doctors. Warriors wearing white uniforms, these medical miracle workers daily face down one of mankind's oldest and most persistent foes, disease. Like any other Warrior, no sacrifice is too great for a crusading young doctor to make to win the struggle over disease (although it is also true that it is rare to find a doctor who isn't rich).

The most recognizable medico from the Golden Age of Radio is Dr. Kildare, who came to the airwaves after appearing in nine films from a fifteen-film MGM series. Before that, the good doctor had been a pulp-crime fiction character created by Max Brand (the nom de plume used by Frederick Schiller Faust). Primarily a writer of Western and pirate fiction, Brand claimed to have based Dr. Kildare on a college friend, New York surgeon Dr. George "Dixie" Fish.

In keeping with Brand's more harrowing stories, Kildare first appears in Interns Can't Take Money (1936), a story of an idealist young surgeon who winds up chasing gangsters. Paramount released a film based on the story starring Barbara Stanwyck and Joel McCrea in 1937. MGM bought the rights to what would become the Dr. Kildare series, and Brand obligingly retooled the character into a more idealistic diagnostician.

As production on Victory was wrapping, Lew Ayres' draft number came up. Although he may have used his celebrity to find a non-combat assignment, he listed as a conscientious objector and was listed as 4E status. However, a review showed that Ayres had previously applied for A-O-1 status which would allow him to serve as a non-combatant medic. Barrymore continued the Dr. Kildare film series without Dr. Kildare, appearing in Calling Dr. Gillespie and Dr. Gillespie's New Assistant (both 1942), Dr. Gillespie's Criminal Case (1943), Three Men in White (1944), Between Two Women (1945), and Dark Delusion (1947).

Ayres began his service as a First Aid Instructor before requesting an overseas assignment (which required a cut in rank). He helped to set up field hospitals in support of MacArthur's invasion of Leyte and would go on to earn three Battle Stars. The hit to Ayres' career from the 4E Conscientious Objector status was erased by his new status as a War Hero, but his standing as a marketable leading man had mostly evaporated.

In 1946, the Marcus Loew Talent Agency bought station WHN New York, and in 1948 changed the call sign to WMGM to emphasize the station's relationship with the Hollywood film studio. MGM has a history of using radio to help drive movie ticket sales, and part of WMGM's business model was to use MGM films to boost sales of transcribed radio programs based on MGM properties. This is what brought Lionel Barrymore and Lew Ayres back together at the radio version of Blair General Hospital.

The characters for The Story of Dr. Kildare radio program were largely carry-overs from the film series, including Hospital Administrator Dr. Walter Carew, Nurse "Nosey" Parker, and Kildare's love-interest, Hospital Receptionist Molly Byrd. The stories had less to do with the relationships between the characters but emphasized the staff of Blair Hospital employing the latest cutting edge medical techniques to save their patients.

Lionel Barrymore had the acting credits to take top billing but graciously remained as a supporting character to Ayres' Kildare. However, this could not prevent him from shining through in every scene he was involved in, which was doubly amazing given the fact that by this point in his career, Barrymore was confined to a wheelchair by arthritis.