A Christmas Sing with Bing

After missing Christmas 1954 on the air, Bing Crosby began a new tradition with 'A Christmas Sing.'

Choose your CD format
or order disks individually: Add to Cart Add to wishlist
Play a sample episode from December 23, 1955:

When it comes to Christmas Traditions in America, the name Bing Crosby is right up there with Frosty, Rudolph, and Santa Claus. However, Christmas 1954 would go down as the first time in twenty years that there was no half-hour Bing Crosby Radio Christmas broadcast. 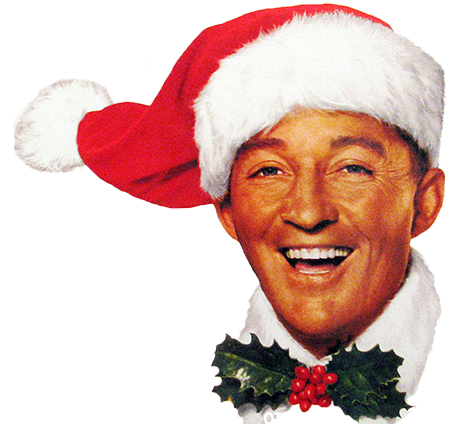 Bing was born in 1903 and grew up in Spokane, Washington, where he attended Gonzaga High School and enrolled in Gonzaga University. He had a summer job at the Spokane Auditorium in 1917 where he saw Al Jolson and was mesmerized by Jolson's delivery. Seeking fame and fortune, Bing moved to Hollywood in 1925 and he got his big break when he and Al Rinker were hired by Paul Whiteman to form The Rhythm Boys. Mack Sennett signed the crooner for a series of musical short films in 1931, and in that year Bing had ten of the top 50 songs.

Bing signed with Decca records in 1934 and hosted his first radio series for Cremo Cigars. The Kraft Music Hall tapped Bing to replace Paul Whiteman in 1936, and he held the gig for the next ten years. During the Christmas 1941 broadcast, just as the Nation was moving to a War footing, Bing debuted Irving Berlin's "White Christmas", and the next year the song was featured in the film Holiday Inn (1942, Paramount). Although '54 would be the 'Year without a Bing radio Christmas show", he did join Danny Kaye, Vera-Ellen, and Rosemary Clooney in the film White Christmas (1954, Paramount).

In the spring of the same year, Bing decided that he was no longer interested in making a weekly half-hour radio program and quit CBS's The Bing Crosby Show for General Electric. Bing's oldest son, Gary, was supposed to take over hosting duties, but the transition was delayed after Gary had been involved in an automobile accident. The situation was remedied in 1955 when Bing and the Insurance Company of North America produced A Christmas Sing with Bing which aired over CBS on Christmas Eve and carried by Canadian Broadcasting (CBC), Armed Forces Radio (AFRTS), and internationally by the Voice of America (VOA).

Although the producers may have seen the broadcast as a one-time show (the program was available on Decca Records before the next holiday season) listeners could hear traditions being established. The program opens with strains of Berlin's "Happy Holiday" and Bing's last number was "Silent Night", a pattern that would remain through 1962. 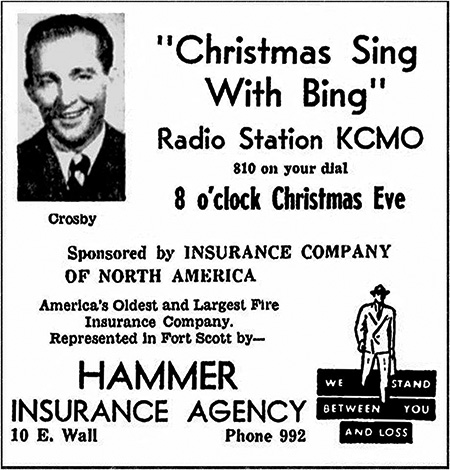 The format was designed to give the illusion that Bing, along with Paul Weston and His Orchestra, the Norman Luboff Choir, announcer Ken Carpenter, and several guests from around the world were coming into your living room to sing carols with and for you and your family. In reality, thanks to the magic of magnetic audiotape, the programs were as slickly edited and polished as a Hollywood movie.

After the War ended, Crosby began investing in AMPEX, the company which was refining magnetic tape recording technology developed in Germany. Although the networks insisted that audiences would reject "canned" radio performances, Bing realized that tape editing would allow him to make multiple "takes" of his performance and keep the best one. Besides, if he could tape four episodes in a week, he would have the rest of the month to go golfing.

The Christmas Sing programs featured visitors from around the world, including Expeditionary Marines aboard their ships in the Mediterranean, the Mormon Tabernacle Choir in Salt Lake City, the Vatican Choir in Rome, son Gary introduced the Austrian Choir from Vienna (Gary had served in the same unit in Germany with Elvis Presley) and other international stops.

The 1962 broadcast was partially dedicated to promoting Bing's recent album I Wish You a Merry Christmas (1962).