As a youngster, the only thing Danny Kaye was good at was singing songs and telling jokes. After spending time on the Borscht Belt, he found success on Broadway.

Choose your CD format
or order disks individually: Add to Cart Add to wishlist
Play a sample episode from July 22, 1940:

"Danny Kaye in Forecast: When You Were 21" 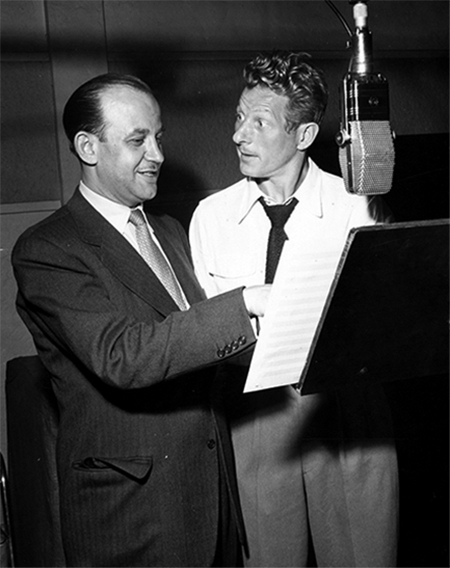 After Jerry Siegel and Joe Shuster left DC Comics over a dispute to the rights to their creation Superman, the team needed to come up with a new super-hero. What they came up with was Funnyman. It featured mild mannered TV comedian Larry Davis, whose agent devises a scheme where Larry performs a super-hero type stunt for publicity. The stunt goes wrong when Larry foils an actual crime without realizing it, and decides to continue his work as a costumed super-hero.

Funnyman’s mannerisms were based on Danny Kaye, which is not surprising. Not only did rubber-faced Kaye put on performances which would seem like they came from the pages of a comic book, but with his humanitarian work in support of UNICEF, Danny Kaye was a bona fide hero in real life.

Jacob and Clara Kaminsky immigrated from the Ukraine to Brooklyn with their two boys, two years before their youngest, David Daniel, was born in 1911. Little Danny attended PS 149 where he entertained his schoolmates and teachers with songs and jokes, but dropped out of Thomas Jefferson High School without graduating. After Danny’s mother died while he was in his early teens, he ran away to Florida where he scratched out a living busking on the streets.

When Danny returned to New York, he took up a series of jobs for which he would be woefully unsuited. As a soda jerk he could never get the ratio of syrup, ice cream and soda right. As an insurance investigator he made a boo-boo that cost the insurance company $40,000. A dentist who hired Danny to watch the office returned from lunch to find the youth refurbishing the office woodwork, using the dentist’s drill!

About the only thing he was good at was telling jokes and singing songs. Danny spent his teen years working the Borscht Belt resorts in the Catskills. His break came when he joined the dance troupe "The Three Terpsichoreans" He adopted the name Danny Kaye and the group made a vaudeville tour of the U.S. and in 1934 left for a six month tour of the Far East. A storm in Osaka damaged the hotel where the group was staying, nearly killing Danny when a chunk of debris was blown through his window. There was no power for the evening’s performance, so Danny illuminated his face using a flashlight and sang every song he could remember. In English, of course. This was when Danny became interested in pantomime. He found it a useful skill when ordering in restaurants where he didn’t know the language, sometimes with mixed results. Once in China, he wanted to order chicken, so he began clucking and flapping his arms. The waiter smiled in realization, left then returned with two eggs. 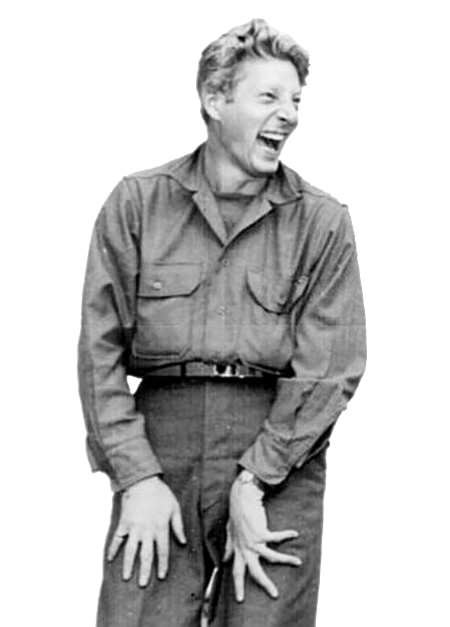 When he returned to New York, he made a few two-reel comedy shorts for Educational Pictures and returned to the Borscht Belt circuit. In 1939, Danny was in the short lived Broadway show Straw Hat Revue. The show closed after 10 weeks. Kaye got decent reviews, but the best was from the show’s rehearsal pianist, Sylvia Fine, whom Danny married in 1940. Although they didn’t know until working on Straw Hat, Danny and Sylvia grew up just blocks from one another. Sylvia’s father was a dentist whose office had been damaged when the boy he hired began carving up the furniture with a dentist’s drill…

Danny found success on Broadway in 1941’s Lady In The Dark. The showstopper was a number called "Tchaikovsky" where Danny rattled off the names of 50 Russian composers in 39 seconds. In 1944, Danny was cast in MGM’s Technicolor Up in Arms, a remake of Whoopee (1930). The next year, The Danny Kaye Show began broadcasting, which featured Eve Arden and Harry James and His Music Makers. During the summer break after the first season, Danny was asked to participate in a USO tour for the troops occupying Japan. Not only was there the honor of entertaining the troops, Danny would be the first American actor to visit Tokyo after the War, territory he knew from his 1934 vaudeville tour. Unfortunately, making the tour meant he would miss the first two months of The Danny Kaye Show’s second season. Several of Danny’s friends, including Frank Sinatra, Judy Garland, George Burns and Gracie Allen, and Jack Benny stepped up as substitute hosts.

Danny was flying home from London in 1949 when the aircraft experienced mechanical difficulties 500 miles over the Atlantic. While the crew began preparing life jackets and rafts as the plane clawed its way back to Shannon, Ireland, Danny’s nervous seatmate, Maurice Pate, began talking about his work as head of the United Nations International Children’s Emergency Fund. From that day forward, Danny was tireless in his efforts to support UNICEF. When UNICEF was awarded the Nobel Peace Prize in 1965, Danny Kaye was selected to accept the award on behalf of the organization.

In 1983, Danny underwent a quadruple bypass heart surgery. Although the operation was a success, he contracted hepatitis C from a blood transfusion. Complications from the hepatitis lead to internal bleeding in 1987, which induced heart failure. Danny Kaye died on March 3, 1987, at the age of 76. There are three Stars on the Hollywood Walk of Fame honoring Danny Kaye, at 6563 Hollywood Blvd for Motion Pictures, at 6125 Hollywood Blvd for Recording, and at 6101 Hollywood Blvd for his work in Radio.