Chase and Sanborn tried an opera format for a while when ventriloquist named Edgar Bergen and his dummy Charlie McCarthy took over the show.

Choose your CD format
or order disks individually: Add to Cart Add to wishlist
Play a sample episode from May 09, 1937: 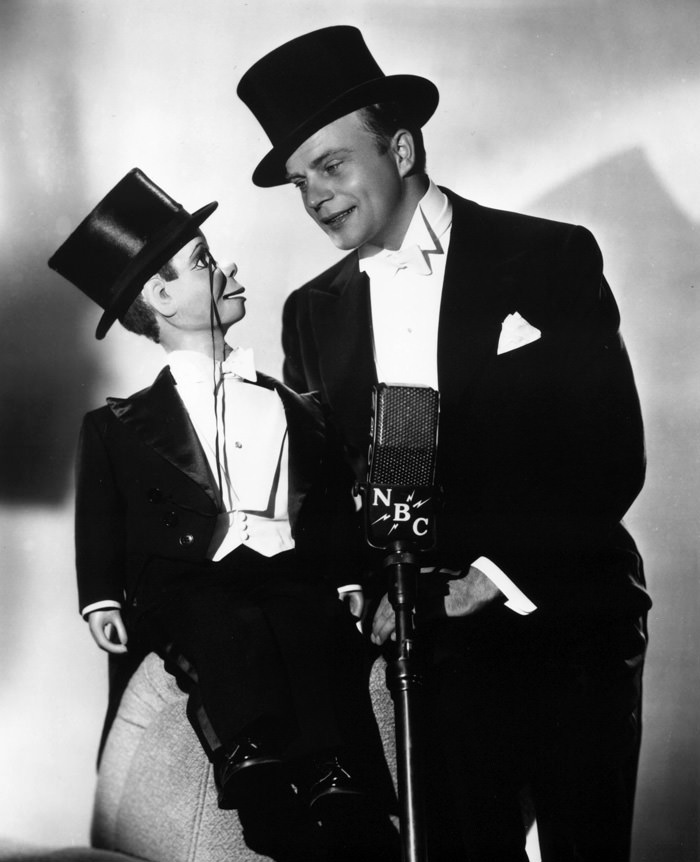 Standard Brands was the result of a merger brokered by JP Morgan in 1929. Patterned roughly after the General Foods conglomerate which was lead by Marjorie Merriweather Post and her husband, financier E.F. Hutton, Standard Brands amalgamated Fleischmann's Yeast, The Royal Baking Powder Company, E.W. Gillet, Widlar Foods Product Company and the Chase and Sanborn Coffee Company of Boston.

One of the first things that Fleischmann's did with the influx of cash was to enter the relatively new arena of radio sponsorship with The Fleischmann's Yeast Hour, a variety show hosted by singer and bandleader Rudy Vallee. The show was a runaway success, second only to Amos 'n' Andy in popularity.

Naturally, Standard tried to achieve this success for their other brands, but struggled to find a host as appealing as Vallee. The Chase and Sanborn Hour paid a record breaking $5,000 a week for French variety star Maurice Chevalier, but the fit wasn't quite right and Chevalier went back to Paris. Eddie made a hit when he appeared on The Rudy Vallee Show, and was given The Chase and Sanborn Hour in 1931. Cantor was the highest paid star in radio when he decided to move on in 1934.

Chase and Sanborn tried an opera format for a while, and became a vehicle for the Major Bowes' Amateurs for a while before the Major moved to CBS. The answer again came in the form of a wildly popular guest on The Rudy Vallee Show, a ventriloquist named Edgar Bergen and his dummy Charlie McCarthy.

A ventriloquist on the radio did not make a lot of sense (who can tell if his lips are moving or not?), but Bergen's alter ego stole the show when he appeared on The Fleischmann's Hour. The question was whether Bergen and McCarthy could carry it off week after week. The answer was a resounding yes. Beginning in May of 1937, Bergen was supported by Don Ameche as master of ceremonies, with singers Dorothy Lamour and Nelson Eddy, and a guest star each week. Everyone had an interaction with Charlie, and each program featured a sketch or drama between Ameche and Lamour or the guest, along with songs from each of the singers (and guest, as appropriate).

Notable misanthrope and liquor aficionado W.C. Fields' film career had been sidetracked due to illness, but he was part of the regular cast in the first months after Bergen and McCarthy took over the show. Fields' role was a comic foil for Charlie, and they began feuding in the first episode. The exposure renewed the studio's interest in Fields, and he left the show in September, 1937, to renew his movie career.

W.C. Fields was not there when his most famous co star, Mae West made her infamous appearance on the show on December 12, 1937. Ms. West engaged in some racy banter with Charlie, but what really upset the censors was a sketch with Don Ameche based on Adam and Eve. Enough people found the play sacrilegious that Mae West was banned from radio.

In 1940 most of the cast was dropped and the show went to a half hour format. Bergen also began taking summer breaks, and the show was either replaced or found a temporary host during these periods, notably Frances Langford and Spike Jones. In 1948, Chase and Sanborn announced that they would not renew Edgar Bergen's contract. Not that Bergen and McCarthy missed a beat. CBS and Coca Cola were happy to have them.

Note: these recordings are part of the larger Bergen & McCarthy Collection.