Enjoy this collection of sultry and witty guest appearances including the controversial skit that banned her from the airwaves. 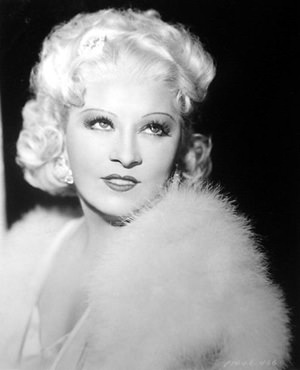 Mae West made a career of sultry and witty performances delivering double entendres, with a cat-like purr. She created and nurtured a racy character for her on and off screen life. To her credit, this erotic image was ambitiously calculated to further her career, create a fantasy life for herself, and allowed her to reach iconic status. West once stated about her racy approach, "It's better to be looked over, than overlooked." She began performing in vaudeville as a child and with the encouragement of her mother helped popularize the shimmie at the age of 12 and was billed as "The Baby Vamp."

One of the first women to consistently write in the movies she stared in, Mae West wrote risqu plays including Sex, The Wicked Age, Pleasure Man and The Constant Sinner, The Drag, Diamond Lil, and Sexette many of which jumped from the stage to the silver screen. The titillating controversy around her plays and her persona equaled box-office success. She was no stranger to scandal in 1927 she was arrested for public obscenity which she turned into a media circus when granted the request to wear silk underwear rather than the prison issue clothing. 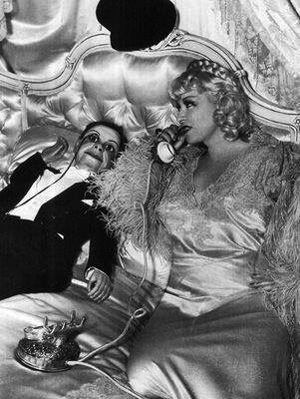 When given a contract with Paramount studios, she was given the power to rewrite her scenes. Her oft-repeated famous line "Is that a gun in your pocket or are you just happy to see me" was first said to a LAPD officer escorting her to her home. So tickled by the meaning of this line, she used it in the film My Little Chickadee.

In her raucous guest appearance on the Edgar Bergen and Charlie McCarthy show, she flirted with McCarthy making the always clever dummy loose concentration when she said, "Charles, I remember our date and have the splinters to prove it." The show also featured an Arch Obelor skit of Adam and Eve with Mae West and Don Ameche as the fateful biblical couple; it was considered so obscene that her name was banned from the network. On being censored she said, "I believe in censorship. After all, I made a fortune out of it."

In all there are few surviving radio appearances existing due to the censorship after the Bergen-McCarthy show as studios wavered between love and hate of this memorable woman. Included in this collection are all known guest appearances of Mae West.