The Blue Beetle was an early comic book hero that tugged on the cape of Superman. Created by Charles Nicholas for the comic book Mystery Men, it first appeared in 1939.

Choose your CD format
or order disks individually: Add to Cart Add to wishlist
Play a sample episode from July 10, 1940:

"Saved By A Hair" 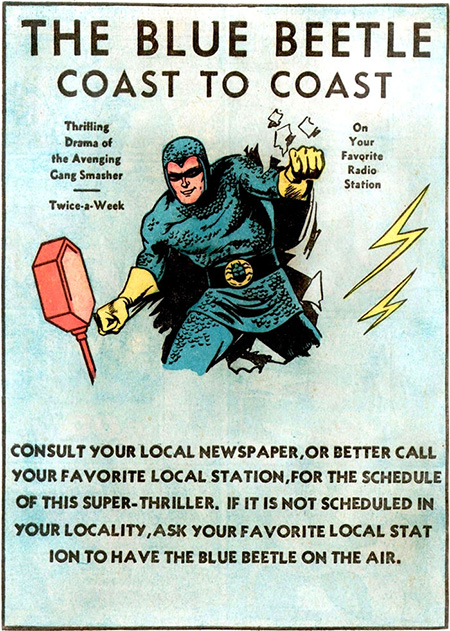 The Blue Beetle was another early comic book hero that tugged on the cape of Superman. Created by Charles Nicholas for the comic book Mystery Men, it first appearedin 1939. The Blue Beetle was moved with his popularity to newspaper syndication and then the old time radio show in 1940, in addition to continued comic book adventures.
Actor Frank Lovejoy (middle)
with the actress Joan Banks and their children.
Frank Lovejoy appeared in several radio
programmes, including Nightbeat

On radio, Blue Beetle's career was rather short-lived, but it was exciting while it lasted. Fine radio and motion picture actor Frank Lovejoy (often on Suspense, and star of Nightbeat) was the Blue Beetle for the first 13 episodes, while for the rest of the shows the actor was uncredited. The Blue Beetle was a young police officer who saw the need for extra-ordinary crime fighting. He took the task on himself by secretly donning a superhero costume to create fear in the criminals who were to learn to fear the Blue Beetle's wrath. The 13-minute segments were usually only 2 parts…so the stories were simple and obvious in comparison to the many-parted Superman radio show.The Blue Beetle the distinction of being one of the few golden age characters to survive into to present, but the character has been through many changes and revisions, and the original character is quite different from the one that comic book readers know today.

There are many juvenile radio action and adventure serials to choose from. Some of the super heroes are Superman, Captain Midnight, and The Green Hornet. The aviation adventure shows include Hop Harrigan, Speed Gibson and The Air Adventures of Jimmy Allen. Jungle Jim and Tarzan roam the wilder regions of the Dark Continent, while Terry and the Pirates found adventure in the Orient. Our own Wild West gave us excitement aplenty, like Sky King or Straight Arrow, along with several famous cowpokes in their own half-hour shows. For more adventure, see also Dick Tracy.  Click here for more information on comics and funny pages in old time radio.