Choose your CD format
or order disks individually: Add to Cart Add to wishlist
Play a sample episode from September 01, 1946:

"Its The Bary Wood Show ... starring radio's favorite baritone and the sensational voice of Margaret Whiting ... " 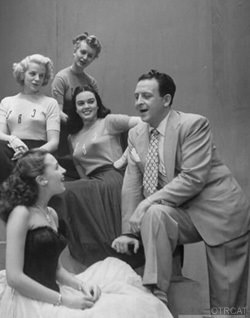 When many OTR fans today hear of Lucky Strike Cigarettes, the first thing that comes to mind is the "L.S.M.F.T." era of The Jack Benny Program. While the nonsensical ramblings of tobacco auctioneer "Speed" Riggs was a bit of a shock to fans used to hearing the gang sing "Jay, Ee, Ell, Ell, OHHHH!" at the top of each episode, the transition from General Foods to cigarettes had little effect on the quality of the show.

Speed Riggs' jabber at the beginning of the program did not originate when he joined Jack and the Gang in the fall of 1944, however. Lucky Strikes had a long presence in radio, notably with Your Hit Parade beginning in 1935. The show's premise was that the producers would survey sheet music sales, record sales, bandleader requests, juke-box numbers, and disk jockey play to determine the top ten most popular songs in the nation for a given week. "Count-down" programs would be important during the Disk Jockey era, but during the reign of Your Hit Parade, the networks were still discouraging the play of recorded music, which meant a program showcasing songs needed singers. Treasury Department head Henry Morgenthau Jr. asked composer Irving Berlin for a song to promote the sales of Defense Bonds. The song "Any Bonds Today?" was given to singer Barry Wood and released June 10, 1941, about the same time that Wood was hired by Your Hit Parade. "Any Bonds" would be covered by the Andrews Sisters, Tommy Dorsey, Kay Kyser, Gene Autry, and Bugs Bunny, but because he was able to push it in Hit Parade, the song was definitely Wood's.

Wood was from New Haven, Connecticut, b. 1909, had attended Yale and was the younger brother of bandleader Barney Rapp. In addition to "Any Bonds", Wood was also associated with War-time ditties like "Arms for the Love of America", "We Did It Before (And We Can Do It Again)", and another Bond-drive tune, "Ev'rybody Ev'ry Payday".

Hit Parade promoters marketed Wood as the nation's "sweater boy" in contrast to the "sweater girls" who were making such a splash in Hollywood pin-ups. Sadly, what most Radio historians remember about Barry Wood's time at Hit Parade was that he was fired in the spring of 1943 to make room for "the new guy", Frank Sinatra. One of the most memorable things about the entire Hit Parade saga was what a pain in the rear Sinatra turned out to be, but that is a story for another time.

Barry Wood continued to record as well as appear on the radio, especially on Treasury Department programs. After the War, ZIV Syndications put together The Barry Wood Program to sell to local programmers who would insert their own advertisements into the quarter-hour spots. Wood would go on to enjoy success in television production. He passed away in 1970.