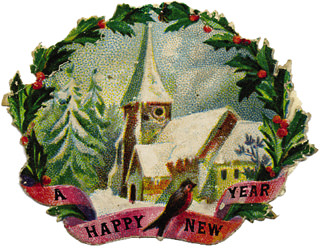 Happy New Year from OTRCAT.com!  New Years Resolutions from loosing weight to paying off debts, collecting more old time radio show to helping more with charity.  But first are the New Years Eve parties with some of the most hilarious performers in Hollywood.

Fibber McGee and Molly are tickled pink when they are invited to the exclusive Country Club New Years Eve Dance Party.  Miss Brooks struggles to find a party to celebrate the New Year and get stuck babysitting while everyone else including Ms Davis attends parties.

The Whistler follows a couple married under false pretenses on New Years as they attempt to celebrate their first anniversary.  In Gunsmoke, Ira Pucket decides on a New Year's resolution to become a new man…a bank robber. 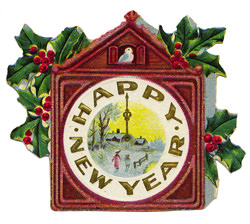 Get out your noisemakers and top hats, it's a New Year celebration at OTRCAT.com.  Please enjoy these Holiday-themed old time radio shows free to download from the New Years Collection.  Read about each episode and listen to these special New Year's shows! 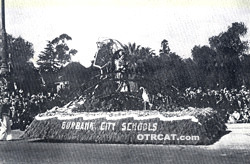 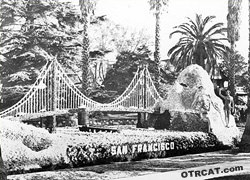 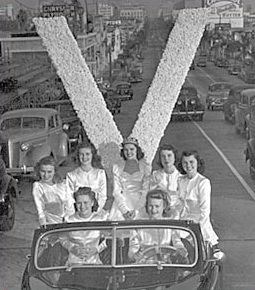 Rose Bowl Floats from years past...

"Rose Bowl Float " from December 27, 1946
The man young today and young forever, Alan Young stars in his own New Years radio show. Alan tries to exchange the book "What Every Young Woman Should Know" at the book store for a detective book with plans of becoming a detective. After reading his detective book, he plans on hiding the secret plans to this year's Rose Bowl parade float for Van Nuys.

"New Year's Dance at the Country Club " from December 30, 1952
Fibber and Molly are invited to a New Years Dance at the country club by Old Man McDonald's, The President of the Third National Bank. Fibber helped mean old McDonald with car trouble and the rich old man gave Fibber a Corona cigar the size of sausage and tickets to the very exclusive country club dance. The King's Men and Billy Mills and His Orchestra perform.

"The First Year" from December 31, 1947
The story falls in two parts—the second part ends in homicide police department. The story begins on New Year's Eve the year before with the rich Lydia and the handsome Elliott. Uncle Phillip refuses to release Lydia's inheritance unless she learns the meaning of responsibility.

"Babysitting on New Year's Eve " from January 1, 1950
Ms Davis plans on listening to the radio with a few friends and serving fruit punch. Poor Miss Brooks is waiting for Mr. Boyton to ask her to a New Years Eve Party. Mr. Boyton comes over to ask Miss Brooks to come to the local biologist's party, but can't afford the $5 ticket; he promises that he will think of her when she looks at his noisemaker. 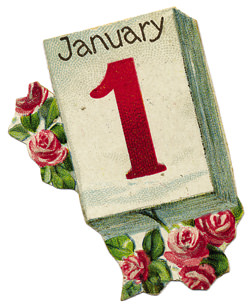 "Pucket's New Year " from January 1, 1956
Ira Pucket's skinner, Jed Larner, has left the old man to freeze. When he looses his foot due to frostbite, Pucket is distraught and decides to start a new life in the New Year…he robs a bank.

"Rose Bowl Parade " from January 2, 1955
Jack Benny states "I don't expect to come in sober on Groundhog Day." As the Jack Benny show tries to get ready for the New Years Day show, there is much confusion with the staff because everyone partied the night before. Jack Benny then pays back old debts, starting with a quarter for Don Wilson and the gang heads to Pasadena to watch the Rose Bowl Parade. 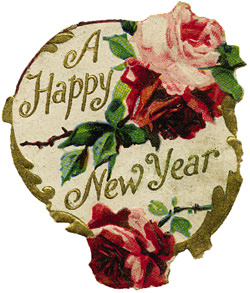