Choose your CD format
or order disks individually: Add to Cart Add to wishlist
Play a sample episode from January 01, 1954: 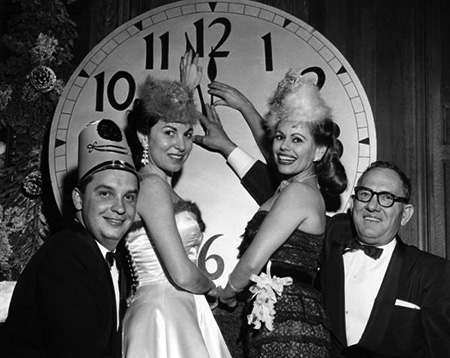 A happy enough sentiment, but why should we care while we are chilling the champagne, fitting our best funny hats, and getting ready for the big ball drop?

Sylvester was the 33rd Pope of the Catholic Church from 314 to 335 A.D., an important period for the Church which saw the First Nicene Council (Sylvester did not personally attend), adoption of the Nicene Creed, the founding of the Basilica of St. John, Old St. Peter's Basilica, and several other great churches, and a strengthening of ties with the Eastern Church in Constantinople.

The most widely remembered fact about Sylvester himself is that he died on December 31. When Pope Gregory introduced the Gregorian Calendar in 1582 to correct deficiencies in the Julian System, December 31 became the last day of the year. Wishing no disrespect, it seems a lot more fun to celebrate that than the death anniversary of a long-gone Pope.

Indeed, when celebrating New Year's Eve there is a greater emphasis on the Party than reflecting on the Old Year and anticipating the New. In many ways, the New Year means learning all over how to write the dates on our checks (a difficulty largely superseded by the convenience of Internet banking), but it truly can be a time for New Beginnings.

This is why New Year's Resolutions are so important. However, it should also be pointed out that January is the most important month of the year for the bottom line of Fitness Gyms. In January, many will resolve to get into shape, pay for a Gym Membership, but stop showing up by mid-February. A similar phenomenon is the British Public Health Campaign of "Dry January". Supposedly, 17,000 Britons have chosen to completely stop drinking for that much. It is unclear how many actually keep this resolution, let alone its actual effects on Public Health. Many chose to believe it is all a reaction to the hangover from the New Year's Eve Party. 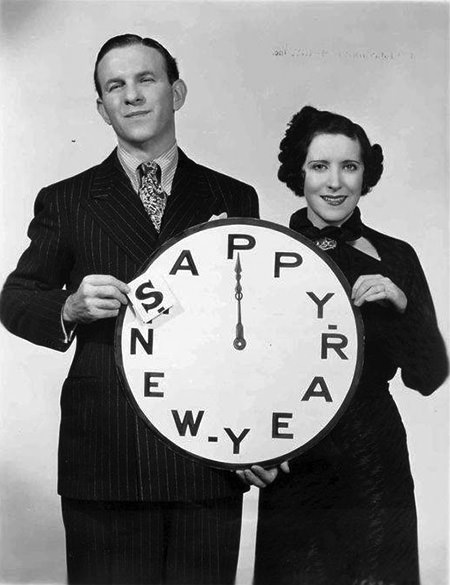 Let's face it New Year's Eve is about having fun. More than a celebration of surviving another year, it is a celebration of surviving another Holiday Season. The Snowflakes and Elves which have been hanging in the Malls since before Hallowe'en are finally being put away (only to be replaced by Hearts and Shamrocks). The end of the Holidays means an end to the shopping madness but should not mean the end to the fun. However, the Fourth of July Cookout is a long way off, so we encourage you to relax and enjoy yourself while waiting for the Apple to Fall in Times Square.

The Jell-O Program Starring Jack Benny, December 29, 1940. After reviewing how he decorated a Christmas Tree on the train back from New York, Jack and the Gang perform their annual New Year's fantasy, "Father Time Rides Again". Mr. and Mrs. 1940 have to be out of the house by midnight because their lease is up.

Amos 'n' Andy, December 29, 1944. Andy is looking forward to attending Charles Jackson's exclusive New Year's Eve party, after all, he took Jackson's daughter out a few times. As the party time approaches, he discovers that he is about the only one in Harlem who didn't get an invitation.

The Alan Young Show, December 27, 1946. Using the knowledge gained from his new book on Criminology, Alan determines that he is the best one to hold the secrets plans for the Van Nuys Rose Parade Float. Hubert Updike, who is sure that the Beverly Hills Float is going to win, but to be sure he needs to steal the plans from Alan.

The Great Gildersleeve, December 31, 1947. After clearing his desk of unfinished 1947 business and closing the office for the year, the Water Commissioner has plans to see each of his lady friends (and collect a New Year's kiss from every one of them). However, he hears that Judge Hooker doesn't have any plans, so Gildy decides to take him along on his adventures, but the Judge wants to spend the evening in the bosom of family; Gildersleeve's family!

Maxwell House Coffee Time, December 30, 1948, George and Gracie are planning a big New Years' Eve Party with an orchestra and all the fixings, but Gracie discovers that she forgot to mail the invitations. To fool George, she decides to hold New Year's Eve a day early.

Fibber McGee and Molly, January 3, 1950. The master and mistress of 79 Wistful Vista are visiting Molly's wealthy Aunt Sarah for the Holidays, and it is a lifestyle that Fibber could become only too used to. Between taking advantage of the servants and trying to manage the wealthy woman's business affairs, it is easy to understand why Fibber gets the welcome he does.

These recordings are also included in the larger compliation: New Years Eve Collection