As a boy, Guy Lombardo put together a band with his brothers in their father's tailor shop, later they would become the Royal Canadians and Guy would be known as "Mr. New Years's Eve".

Choose your CD format
or order disks individually: Add to Cart Add to wishlist
Play a sample episode from December 30, 2020: 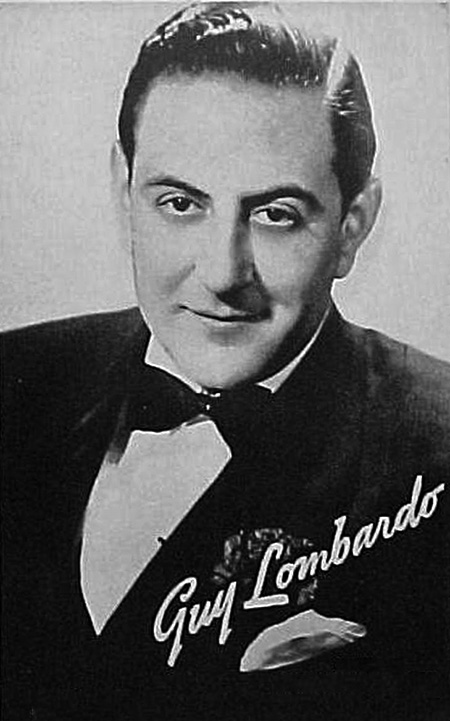 We should never underestimate the power of a father's love, especially when that father loves music almost as much as he loves his sons.

Gaetano and Lena Lombardo left Italy to open what would become a successful tailor shop in London, Ontario, Canada, and set about producing five fine sons, the oldest being Gaetano Jr., born 1902, whom everyone would call Guy. As each of his first four sons got old enough, the senior Lombardo gave them each a musical instrument, hoping to eventually have an in-house orchestra to accompany his rich baritone singing voice. "I got the violin because I was the oldest," Guy said several years later. "And the violin player is always the leader. That's why I'm the leader." Brother Carmen played the alto saxophone (he would also pen many of the group's later hits), Victor handled the baritone and soprano sax, and Lebert became a trumpeter. When Guy convinced neighborhood pal Fred Kreitzer, who played the piano, to join in, the first Lombardo orchestra was formed. The rehearsed in the tailor shop and Gaetano arranged their first appearance at a church lawn party in 1914.

Their first paying gig was at Grand Bend, Ontario, in 1919, and they realized they needed more brass and a guitar player. With these additions made, they adopted the name "The Royal Canadians" in honor of their homeland and traveled south to the United States seeking fame and fortune. They cut sides for Gennett Studios in Indiana, 1924, and later for Brunswick and Vocalion. Lombardo signed the band with Brunswick and recorded prolifically from 1927 to 1931, and they switched labels to Brunswick from 1932 to 1935, then spent a year with Decca. Near the end of 1935, they recorded for Victor before resigning with Decca in 1938. The same year, Guy became a naturalized American citizen.

The greatest legacy of the Royal Canadians is their half-century of New Year's Eve remote broadcasts, beginning with "radio's first nationwide New Year's Eve broadcast" form New York's Roosevelt Hotel in 1928 (years later, Lombardo would quip that when he died he would take New Year's Eve with him). In the 1929 broadcast, Lombardo introduced "Auld Lang Syne" which had been part of the repertoire since being a popular request among the Scottish community around London, Ontario. As the song became a part of the New Year's tradition, it was said that Guy was "the first Canadian to start an American tradition."

OTR fans will remember that George Burns and Gracie Allen began appearing as regulars on NBC's Guy Lombardo Show in 1932. In fact, the couple's sketch humor was not a great mix with "the sweetest music this side of heaven", and the time slot was refashioned as The Adventures of Gracie when the Royal Canadians moved to CBS in 1934. The Royal Canadians made their first New Year's Eve TV broadcast in 1956, and remained popular with audiences even two years after Buy passed away (although they did face competition from Dick Clark's Rockin' New Year's Eve in the late 1970s, the Royal Canadian's recording of "Auld Lang Syne" is still the traditional first song played after the ball-drop in Times Square).

Guy Lombardo married Lilliebell Glenn in 1926, and the couple remained together for the rest of his life. He passed away of a fatal heart attack at Houston Methodist Hospital on November 5, 1977, after surgery to repair a distended thoracic aorta, Lilliebell was at his side. Three Stars on the Hollywood Walk of Fame were dedicated honoring Guy Lombardo, one at 6363 Hollywood Blvd to Television, another at 6666 Hollywood Blvd for Recording, and for contributions to Radio at 6677 Hollywood Blvd.