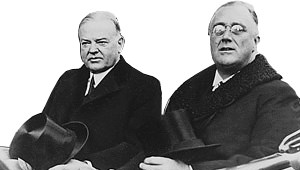 Twas during transition, when all through the nation
People were worried, there was great consternation;
Unemployment was rising, and the banks were in trouble,
And that sound we just heard was the pop of a bubble;
The car boys were strapped and had come to DC
Hoping that Congress would answer their plea;
While Goldman, and Morgan and the biggest of banks
Had all been bailed out, and left town without thanks.
When out on Main Street something new sure did happen,
America woke up from eight years of sound nappin'
Tore off the thick blinders and looked to the past
To the years of Depression after the 29 crash.
The light of our history lit up the night
And what it revealed was a marvelous sight,

For right there on Main Street getting out of a car
Were the ghosts of Herb Hoover and the great FDR.
With sonorous tones FDR made a point
And he yelled right at Hoover, which shook up the joint:
"First Harding, then Coolidge, and finally Hoover!
What we really needed then was a shaker and mover!
When business is bad and the economy's worse
Trickle-down fails and becomes a real curse.
From the roof of the White House and the top of the mall,
Your goal should have been to reassure all.
To get people working, that's really the trick,
Like a gift-giving frenzy from good ol' St. Nick."
Now Hoover who listened, his head bowed in shame
Said to his foe, though not using his name:
"The radio speeches you chose to orate.
They really moved people, they really were great,
With radio you reached them and told them the tale,
Repeated your message and drove home the sale."
"The voters chose," Hoover seemed disappointed,
"They gave you the win, and you were anointed.
Then when you took office and started to chat,
Well that really worked, and I never did that.
So what should Obama, the man of this hour,
Do to fix problems and use his great power?"
Frank grinned a big smile and to Hoover did tell,
Obama is good, he articulates well,
He's mastered the wording, this man is no rube,
He speaks through the airwaves and appears on You-Tube.
He speaks so directly, on the air or the net,
His message gets through, on this you can bet."
Then the two charming ghosts, now beginning to fade,
Looked all around at the mess we have made.
But the question remained, is this a recession,
Or have we descended right to a Depression?
You have to have hope that the American spirit,
Can design a great car, and then engineer it.
Though still unsure of the path that was needed,
Hoover considered Frank's words and acceded.
Roosevelt, his legacy sound and secure,
Took Hoover's hand, trying hard to assure,
And I heard him explain as they walked up the block,
This time's not as bad, let's wait for Barack.

Be the first to comment on "Twas During Transition"