Although Information Please tested the ability of audiences to recognize quotations more than other radio program, the writers of The Great Gildersleevealso took their listeners on frequent strolls down Literary Lane. In my episode guide to the show, Tuning in The Great Gildersleeve,I cite 111 episodes in which John Whedon, Sam Moore, John Elliotte, and Andy White placed the words of the immortals in the very mortal mouths of Gildy and friends.... 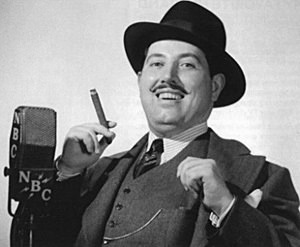 Sometimes the announcers told us the time of day or the state of Gildy’s temperament with aid from the bards. As “the curfew tolls the knell of parting day,” the great man plodded his weary way like Thomas Gray’s ploughman in “Elegy Written in a Country Churchyard.” But if he was introduced to us with euphoric lines beginning with “Breathes there the man, with soul so dead” from Sir Walter Scott’s The Lay of the Last Minstrel, we knew Throcky would be in an upbeat frame of mind.

Throckmorton P. Gildersleeve himself seemed to be the best barometer of his moods. In the lap of tranquility he recited from Longfellow’s “The Village Blacksmith”: “Something attempted, something done/Has earned a night’s repose.” Heeding the call of the beach, he echoed John Masefield when he admitted “I must go down to the seas again.” When feeling on top of the world, he burst forth with an apt line from Byron’s Childe Harold’s Pilgrimage: “On with the dance! Let joy be unconfined!”

At other times Gildersleeve became more philosophical. In a Gray mood he dipped into the elegy again to remind one and all that “the paths of glory lead but to the grave.” Trying to look for the silver lining in the clouds, he reached for the sentiment that can be traced all the way back to Euripides: “The darkest hour is just before dawn.” When the Jolly Boys thought Judge Hooker was knocking at death’s door, Gildy tried to put up a brave front by tapping into some Tennyson to indicate the way he wanted to go: “Let there be no moaning at the bar when I put out to sea.”

Horace Hooker, like Gildersleeve, used literature to make a point, but the point was usually part of a needle designed to get under the water commissioner’s thin skin. “Why so pale and wan, fond lover,” the opening line of Sir John Suckling’s “Song,” followed by Hooker’s derisive chortle stung the recently-rebuffed ladies’ man. On another occasion Gildy’s conscience rather than his pride became the target when Horace quoted from Richard Brinfield’s “Address to the Nightingale” to remind his chum of those he should trust:

“Every one that flatters thee
Is no friend in misery.
Words are easy, like the wind;
Faithful friends are hard to find.”

Richard Peavey dispensed a few quotations in addition to sundaes and sundries when Gildersleeve stopped by the drugstore. The pharmacist once described his home life as being like that portrayed in “The Shooting of Dan McGrew”:“So cramful of cozy joy and crowned with a woman’s love.” Peavey’s history of being henpecked might be traced back to the day he heard a speaker deliver the stirring “I am the captain of my soul” portion of William Ernest Henley’s “Invictus.” Peavey thought the orator had directed the words at him, but because his stronger-willed wife believed the man was looking at her the druggist settled for being the captain’s mate.

Nearly everyone on the show got a chance to wax poetic from time to time. Leila Ransome and Floyd Munson showed they could be Whittier if not witty when the former drawled out Barbara Frietchie’s 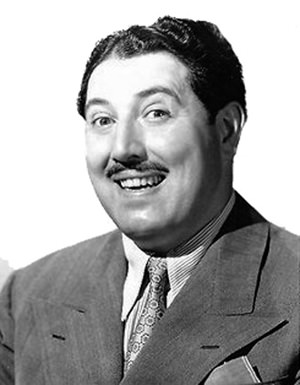 “Shoot if you must, this old gray head” and the saucy barber of Summerfield recalled the “barefoot boy, with cheek of tan.” Even surly Rumson Bullard could quote the classics to suit his purposes as he did when he ranted against the younger generation by repeating the “As the twig is bent” maxim from one of Alexander Pope’s moral essays.

It would have been out of character for unscholarly Leroy to be spouting epigrams, although he once took a hand at corrupting Hamlet with “Alas, poor Leroy. I knew him well.”

But when Marjorie dreamily recited the verses of Rupert Brooke or Robert Herrick or when Hooker moralized by delivering part of the “quality of mercy is not strained” speech from The Merchant of Veniceor the “proper study of mankind is man” aphorism from Pope’s “Essay on Man,” it sounded perfectly natural on this show, one of radio’s more literate comedies. When Throcky or Marjorie read aloud from Little Women, A Christmas Carol, or Ivanhoe, they just reinforced the belief that the audience already had, that this program placed a high value on both language and literature.

Recognizing pertinent allusions unobtrusively integrated into the narrative is just one of the pleasures of listening to The Great Gildersleeve, a program that, because it relied on characterization rather than on jokes for its humor, seems to improve with the passing years. Whether the credit for its enduring charm belongs mainly to the actors or to the writers is a moot point. All that matters was best expressed by Shakespeare in As You Like It: “The little foolery that wise men have makes a great show.”

Spoiler : Timeless humor! My parents loved this show. I loved it.My daughter loved it. Now my teenaged Grandsons laugh along when we listen on Sirius XM radio classics channel