by Craig Wichman, author of "STANDING IN THE SPIRIT AT YOUR ELBOW - A History of Dickens' Christmas Carol as Radio/Audio Dr While walking among the people of London in the summer of 1843, 31-year-old Charles Dickens decided to craft for them a holiday gift that would also quickly raise cash for him and his extended family. His "Ghost Story of Christmas" sold out by Christmas Eve, and the tale was soon seen as stage play, musical, and by 1901, Silent film.

The author maintained that his story was best listened to in a darkened room, and he performed public readings of it himself. So in 1905, it was a natural transition for the story to the nascent "audio drama" field, by way of three-minute cylinders from British Music Hall performers Bransby Williams and Albert Whelan. 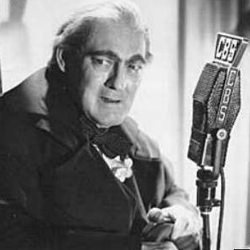 The next step, the first broadcast reading of the Carol, came on December 22nd, 1922, on pioneer station WEAF New York. Many stations followed suit, and on Christmas Eve 1928, the fledgling Columbia Broadcasting System broadcast a full-cast Carol.

Then in 1934, CBS's Christmas Day Carol presented movie star Lionel Barrymore's premiere performance of the role of Ebenezer Scrooge. Barrymore (Drew's great uncle) was a smash, and would play the role on some network every Yuletide until his last in 1952.

Text on OTRCAT.com ©2001-2013 OTRCAT INC All Rights Reserved-Reproduction is prohibited.

Among the many other "covetous old sinners" on radio have been Ronald Colman, Edmund Gwenn, Alec Guinness, and Laurence Olivier; and on disc, Basil Rathbone, Ralph Richardson, Patrick Stewart, and Tim Curry.

The present author has loved the Carol since he was mesmerized as a four-year-old by the very first animated television special, Mr. Magoo's Christmas Carol (one of many film & tv Carols.) And in 1995, through the generosity of Max Schmid of WBAI, I was given the sacred honor of airing my own production with my group Quicksilver Radio Theater, directed by Jay Stern. 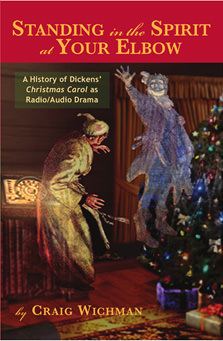 Since then, several new productions have premiered as webcasts; and just last year, F. Murray Abraham Caroled for WNYC. This December of 2012, Arthur Anderson recreated his 1938 Mercury Theater "Ghost of Christmas Past" opposite my Scrooge, in a new Quicksilver production for the Episcopal Actors' Guild at Manhattan's famed Little Church Around The Corner.

Upon Charles Dickens' death in 1870, a poor London child asked a stranger, "Dickens dead? Then will Father Christmas die too?"

In part because the Carol lives and forever will, in the hearts of all of who know how to keep Christmas well "if anyone alive possesses that knowledge."

There is much, much more about the century-long radio/audio history of the Carol to be found in my new book BearManor book "STANDING IN THE SPIRIT AT YOUR ELBOW - A History of Dickens' Christmas Carol as Radio/Audio Drama." 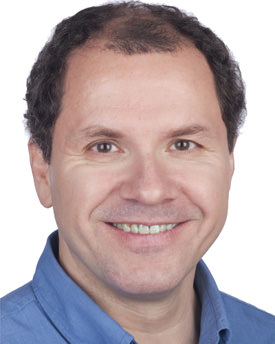 Craig Wichman (email address QuicksilverRT@aol.com) is an actor, writer, producer, and lifelong lover of Charles Dickens' A Christmas Carol. He lives in New York City with his classical singer wife Bernadette and their orange tabby Tyler.

Reviews of his newest book, published by Bear Manor Media: "STANDING IN THE SPIRIT AT YOUR ELBOW - A History of Dickens' Christmas Carol as Radio/Audio Drama."

"Meticulously researched, well documented, and thoroughly enjoyable ... a great read and an invaluable reference tool for many years to come."
-- FRED GUIDA, author of "A Christmas Carol and Its Adaptations"

"An exciting parade of little-known history of the Dickens classic woven by Craig Wichman into a tapestry that is both educational and entertaining!"
-- BILL OWEN, co-author of "The Big Broadcast"

Spoiler : This used to be an annual thing, just like A Charlie Brown Christmas, except on the radio. Even after he died in the 50's, his performance was so ingrained as a part of Christmas that radio stations would rebroadcast it every year. I'm pretty sure the last time I heard Barrymore's recording broadcast on the radio was 1981.