Your Saturday Afternoon Date with the Duke

American composer, pianist, and bandleader of a jazz orchestra for 50 years sponsored by the Treasury Department.

Choose your CD format
or order disks individually: Add to Cart Add to wishlist
Play a sample episode from June 02, 1945:

"Mood to Be Wooed" 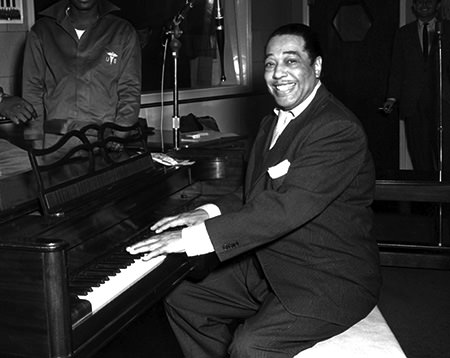 The appellation of "Great" is one bestowed on an artist for a number of reasons. The artist in question might have been a pioneer in their field, or they may have built a huge body of work. Some artists become great simply by having a long career while others are only great if they stand heads and shoulders above their contemporaries. By any measure, Duke Ellington can be called great for these reasons and many more.

The Duke was born into a relatively affluent African-American family in Washington DC. His parents were only a generation or so away from slavery, but raised Due in an atmosphere of racial pride and did their best to shield him from Jim Crow. Both parents were accomplished pianists and Duke was given lessons but his biggest interest was baseball. He reported memories of President Theodore Roosevelt stopping to watch his pals on the diamond while taking his daily horse ride, and one of Duke's first paying jobs was selling peanuts at the Washington Senators ballpark. He was working as a soda jerk at the Poodle Dog Café when he wrote his first composition, "The Soda Fountain Rag" (sometimes called 'The Poodle Dog Rag'). By changing the tempo, the tune could be performed many different ways, "Listeners never knew it was the same piece. I was established as having my own repertoire." About this time, he began sneaking into the local pool halls, but rather than leading him down "the wrong path", listening to the pool hall piano players inspired the young man to take his own lessons more seriously. 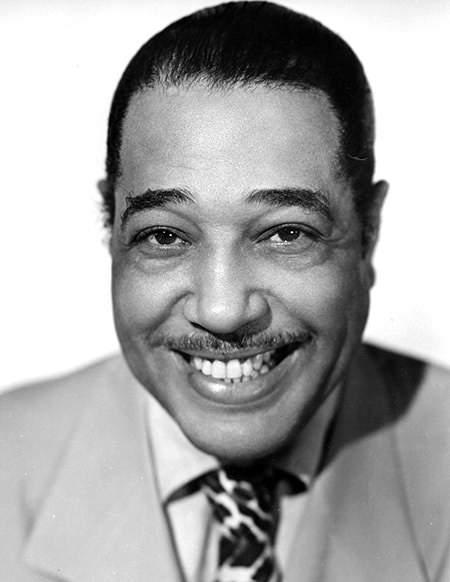 By 1917, Ellington was putting together small groups to play at local dances, and eventually, his drummer, Sonny Greer from New Jersey, convinced him to move to New York where Duke became an important figure in the Harlem Renaissance. He put together several different bands and worked his way up from playing Rent Parties to headlining nightclubs. In 1924, Ellington cut eight records and received composing credit on three of them. After cutting a deal with agent-publisher Irving Mills in 1926, Duke began cutting sides for Brunswick, Victor, Columbia, OKeh, and Pathe'. Ellington began leading the house band at the exclusive Cotton Club in 1927, and part of the job was a weekly radio performance.

As the Great Depression hit, the recording industry began dropping artists at a furious rate, but Ellington managed to keep his outfit in the studio on a regular basis. Although most of his audience at this time was African American, his records were gaining popularity in Europe. Swing bands like Benny Goodman's outfit were becoming more popular with the youth and college-age market. The Duke, who already had a hit with "It Don’t Mean a Thing (If it Ain't Got that Swing)" could swing with the best, but lamented "jazz is music, swing is business".

Although Big Band recordings and appearances are remembered as a staple of the WWII music scene, the fact is that the War did permanent damage to Jazz. The biggest factor was the manpower shortage as a number of popular outfits lost musicians to military service and causing many bands, Ellington's included, to break up. When the recording strike was resolved, the record companies began marketing more solo acts, further damaging the popularity of Swing.

Duke's bands went through several shifts, but his creativity and artistry remained. In spring and summer of 1945, ABC Radio under cooperation with the Treasury Department sponsored a series of Saturday afternoon broadcasts titled Your Saturday Date with the Duke. The programs were made up with selections of remote recordings during recent weeks from venues such as New York's 400 Club and Club Zanzibar, and as far afield as Toledo, Ohio.

By the early 1950's, the music industry began to see Ellington as outmoded, and his success began to falter. An appearance at the Newport Jazz Festival in 1956 introduced the Duke to a new generation of fans. He was tapped to score some Hollywood films, including Anatomy of a Murder (1958) and Paris Blues (1961). He was nominated for the Pulitzer Prize for Music in 1965, but no award was given that year. He continued to record and perform nearly until his death from lung cancer on May 24, 1974, at the age of 75. A Star on the Hollywood Walk of Fame at 6530 Hollywood Blvd is dedicated honoring Duke Ellington's contributions to Recording.