Named "the Force's Sweetheart", Vera Lynn and her singing was a terrific boon to the British military during WWII

The Second World War is widely touted as "Britain's Finest Hour". The British people showed remarkable strength and fortitude. The credit for this remarkable resolve is largely given to the stern leadership of Winston Churchill, but for the Tommy's in uniform, the voice they wanted to hear was that of Vera Lynn. 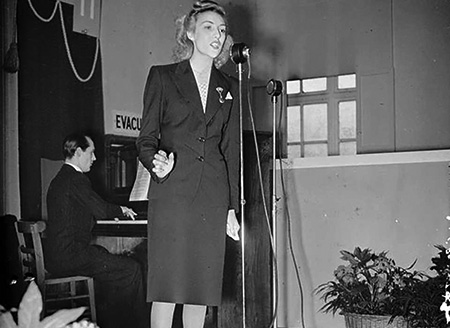 The "Forces' Sweetheart" was born into a working-class family. During the Blitz, Vera drove to different tube stations to sing for the Londoners seeking shelter from the German bombers. She began recording in 1937 and was soon featured on the Sincerely Yours which featured requests written in from Servicemen at the front.

During the period known as "the Phoney War", the Daily Express surveyed British troops about their favorite entertainers, and Vera topped the list. In no small part, this was due to her 1939 release of the sentimental hit, "We'll Meet Again" which would go on to become a British Wartime anthem. After the War, Vera rerecorded the song with a chorus of British soldiers.

As much affection as the British troops heaped upon Vera Lynn, she gave back just as much. Ms. Lynn was active in Veterans Affairs for the rest of her life. In 1982, she released "I Love This Land" to mark the conclusion of the Falklands War and she sang outside Buckingham Palace in 1995 in honor of the Golden Jubilee of VE Day.