This is My Story (Red Cross)

"Is a human document in the records of The American Red Cross whose history of peacetime service is known to every American. Whose program of wartime service to American fighting men on all foreign battle fronts and to women and children at home is the greatest and most varied of any civilian organization."

Choose your CD format
or order disks individually: Add to Cart Add to wishlist
Play a sample episode from September 16, 1943:

"I am a Deserter"

When Clara Barton began organizing the Red Cross in 1873 she met with some resistance. No one in the country believe there could be another event of the scope of the civil War. Generations of Servicemen and others helped by the Organization can be grateful that Ms Barton prevailed against the bureaucracy of the time. 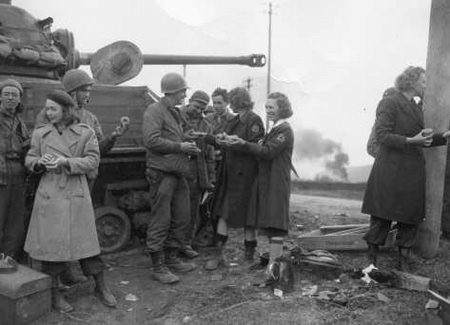 These programs were syndicated as part of the Red Cross's 1943 Fund Appeal. This is My Story presents dramatizations of the people that have been helped by the Red Cross. This service began before the War itself did. One of the stories is of heroism and injury at Pearl Harbor, and of a life saved by blood donated to the Red Cross. Another tells of a American Army Nurse taken prisoner at Bataan and the lives she touched. A young immigrant mother crosses the country with her baby to be with her soldier husband, only to learn that he is being transferred; thankfully the Red Cross is there to aid the families of Servicemen. Possibly the greatest Hero in the programs is Gracie Allen who leaves her last will and testament and a letter telling her husband she loves him, and she leaves her comfortable home and spoiled life to donate a pint of blood for the boys overseas. Hollywood victory committee

Although they are a Civilian Agency and not part of the Government, the Red Cross is vital to the combat readiness of the American Armed Services. Their most notable service is notifications to the service personnel of important family events; every serviceman has stories of themselves or buddy receiving news from home through their unit's chaplain or commanding officer about the death of a loved one or the joyous birth of a son or daughter. When ever possible, at the discretion of the individual Command, the Red Cross, working with other Service organizations, aids in returning Service personnel home in times of tragedy. A happier service of the Red Cross during war time were the "Donut Dollies". Volunteer women who would dispense coffee and donut, along with other "Comfort Items" like toothpaste and cigarettes. During WWII servicemen were charged a small fee for these item because soldiers from other nations had to pay for similar services; to not charge American GIs would bring down Allied morale. During the Vietnam War the Donut Dollies were able to visit front line units thanks to the use of the UH-1 Huey helicopter.

This collection is not to be confused with the old time radio broadcast titled This is The Story which featured a fascinating in depth look into unknown tidbits about people and events that shaped our culture, history, and world.