A new twist on True Crime Unsolved Mysteries from the creator of Unlimited Horizons, Pacific Story and The Fifth Horseman.

Choose your CD format
or order disks individually: Add to Cart Add to wishlist
Play a sample episode from April 22, 1949:

The right to trial by a jury of one's peers is the cornerstone of our justice system. Is it a perfect concept? Not hardly. However, like so many other elements of the imperfect American system, it has the virtue of being better than just about any other system devised by man.

After voting in elections, answering a call to serve on a jury may be one of the most important and sacred services a citizen can perform for the Republic. If selected, a juror is expected to remain impartial when considering the evidence which is presented. Since our concept of justice is based on the assumption of innocence until guilt is proven beyond a reasonable doubt, this impartiality is vital to protecting the rights of all citizens, not just those accused of a crime. It also presents an incredible loophole which savvy defense attorneys are very happy to take advantage of, but that is beyond this discussion. 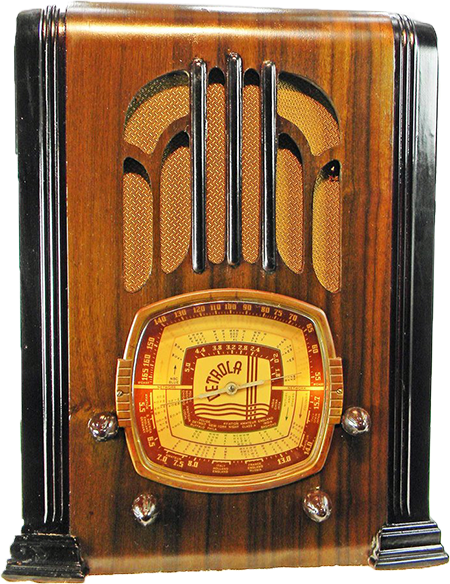 Traditionally, twelve jurors, along with alternates who may be called if one of the twelve become unable to complete their service. In a trial, one of the judge's responsibilities is to protect the jury's impartiality so that their verdict will be based solely on the evidence presented to them. The concept of a "thirteenth juror" refers to a disinterested party who will evaluate the behavior and continued impartiality of the jury to ensure that justice is ultimately upheld.

Writer/director/producer Arnold Marquis asked listeners to act as The Thirteenth Juror as he explored notorious cases which were never brought before a jury. These cases included John Wilkes Booth the assassin of President Abraham Lincoln, and the disappearance of Theodosia Burr, daughter of Aaron Burr who was alleged to have plotted a treasonous conspiracy. Any project involving Marquis would have been worthy of consideration. He began as a news writer for different Midwest radio stations before joining NBC's staff in San Francisco in 1936.

One of Marquis's earliest triumphs came when he was assigned as a writer for Unlimited Horizons, a documentary drama which explained many of the scientific and technological wonders of the age. During the War, he began work on The Pacific Story, with Europe in ruins it seemed likely that Asia might become the new center of wealth and power, so the award-winning series sought to explore the history and peoples of the region. After the dawning of the Atomic Age, Marquis was tapped for The Fifth Horseman, helping listeners to understand both the terrors and the wonders of the marvelously destructive new technology.

The Thirteenth Juror brought together the scholarly importance with the compelling drama which had marked Marquis's previous projects. In one audition program, the story of Theodisia Burr is related. Aaron Burr had served on General George Washington's staff and was eventually elected as Vice President of the United States in 1800. Near the end of his term, he fought a duel with his rival, Alexander Hamilton, resulting in Hamilton's death. After his term as Vice President ended, Burr was implicated in a plot to carve out a personal kingdom from lands in the Louisiana Purchase. He was arrested for treason in 1807 and after his acquittal went into exile in Europe. Theodisia's son died of malaria in 1812 and she was still grieving when her father returned to New York. She boarded the schooner Patriot to sail from South Carolina to join her father in New York but was never heard from again. The program explores the notion that the Patriot was set upon by pirates.

In another audition, the case of John Wilkes Booth is examined. The audition is given weight by its star, Vincent Price. That Booth shot Lincoln in the back of the head on April 14, 1865, before leaping to the stage of Ford's Theatre is not in dispute. The mystery comes afterward. Th official version says that Booth injured his leg when he jumped from the Presidential Box to the stage and made his escape on horseback. After spending twelve days on the run and in hiding, on April 26, Union soldiers cornered Booth at Garrett Farm near Port Royal. Virginia. Refusing to surrender, Booth was gunned down. His body was taken aboard the ironclad USS Montauk to the Washington Naval Yard for identification and autopsy. However, The Thirteenth Juror explores rumors that Booth was not actually killed at Garrett Farm, indeed survived many years. The episode is given even greater cachet by the participation of Vincent Price.