The Sweeney and March Show

An incredibly funny sketch duo who got together late in the Radio Era.

Choose your CD format
or order disks individually: Add to Cart Add to wishlist
Play a sample episode from September 26, 1947:

Ever since the first caveman slipped on a banana peel and followed it up by regaling his cave neighbors with jokes, the conventional wisdom has been that in comedy, timing is everything. For example, let's look at the team of Sweeney and March, who could have been one of the biggest duos in vaudeville, except for the fact that they didn't begin working together until the War Years, well after vaudeville became a memory. 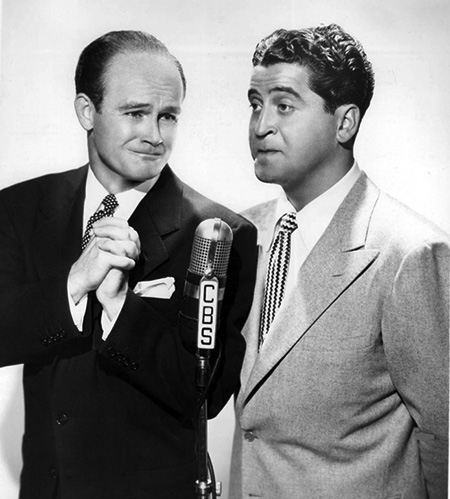 Bob Sweeney (b. 1918) and Hal March (born Harold Mendelson, 1920) were both San Francisco natives who began appearing together in local Los Angeles radio programs in the mid-Forties and won favorable reviews in the press. Their routines resemble a slightly toned-down Abbott and Costello (who came up through the Burlesque circuit, an offshoot of vaudeville). Sweeney played the wide-eyed and sometimes naïve buffoon, although generally much less over-the-top than Lou Costello, and March was the scheming (though with less cynicism than Bud Abbott) straight man.

The pair were first teamed on The New Hoagy Carmichael Show, providing a sketch per episode. CBS gave them their own show in 1946, with several (usually unrelated) sketches each week. Later that autumn, their vocal group, The Starlighters (Pauline Byrns, Vince Degen, Tony Paris, Howard Hudson, and Andy Williams, yes, that Andy Williams) had an engagement to back Jo Stafford in New York, so then up-and-coming singer Doris Day stepped in for a few weeks.

The sketch comedy eventually devolved into a more predictable situation comedy with the pair playing down and out radio comics who shared the smallest office at the CBS Studios and often found adventure and trouble relating to Sweeney's love for Outdoor Boy magazine. CBS canceled the program late in 1948, but they were revived as a quarter-hour daily program on ABC in 1951.

Bob Sweeney and Hal March went on to have separate careers in television. March appeared in several TV sitcoms, including a recurring role on The George Burns and Gracie Allen Show. He got what should have been his big break when he was selected to host The $64.000 Question, but the ensuing TV Quiz Show Scandal all but shattered his career. Nonetheless, he is remembered by two Stars on the Hollywood Walk of Fame, one at 6536 Hollywood Blvd for Television and the other for Radio at 1560 Vine St.

After teaming with Eve Arden and Gale Gordon on the TV version of Our Miss Brooks for the 1956 and 1957 seasons, Gordon and Sweeney costarred in The Brothers on CBS. His supposed big break came when he was selected to costar with Cathy Lewis in the TV version of Fibber McGee and Molly, but even with more than three decades of Radio success, Jim and Marian Jordan's characters did not fit on TV, and the program was canceled before the season ended. Bob Sweeney would enjoy a good deal of success as a TV director and was nominated for a directing Emmy on three different occasions. Cancer finally took Bob Sweeney in 1992.