Smokey the Bear and the Sons of the Pioneers

produced by the Ad Council in 1959, feature the "voice" of Smokey inviting us to "a Little Visit with a Big Star" with musical accompaniment by the Sons of the Pioneers with Len Slye (Roy Rogers). 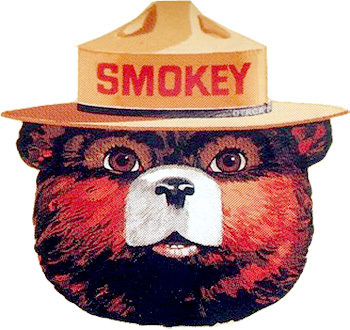 Like so many things, it got its start during WWII. Fighting forest fires had long been part of the US Forest Service's mission, but during the War Years most of the man-power needed was fighting over seas. Of course the Axis tried to take advantage of this. Japan attempted to set fire to the forests of Southwest Oregon (dropping incendiary bombs from a seaplane launched from a submarine and launching 9,000 "fire-balloons" to float the American continent along the jet-stream).

While these efforts met little success, the manpower problem still existed. It was felt that the best way to combat Forest Fire was prevention. Disney loaned the government the use of the characters from Bambi to spread the message, but the loan was only for one year. The character of Smokey Bear debuted on a poster in Aug 1944. 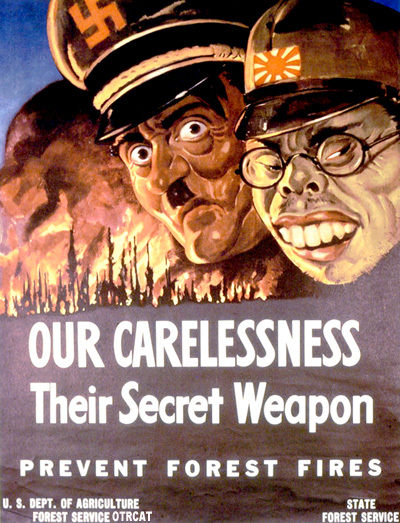 Smokey became Living Symbol after the Capitan Gap Fire burned 17,000 acres in New Mexico during 1950. After the fire soldiers from Ft Bliss, who had been dispatched to help fight the fire, discovered a black bear cub who survived the blaze by clinging to the windward side of a tree. The cub, whose paws and hind-legs had been burned, was nursed back to health and given the name Smokey. Soon Smokey was flown (by Piper Cub) to Washington DC, where he was greeted by members of the press, as well as the Boy and Girl Scouts. Smokey lived in the National Zoo for 26 years, where he developed a taste for peanut butter sandwiches. In 1976 Smokey's remains were returned to New Mexico for burial.

Joining Smokey the Bear in this radio show, The Sons of the Pioneers is a Western Harmony group founded in 1934 by Len Slye in Hollywood, along with Bob Nolan and Tim Spencer. The group had hits with "Cool Water" and "Tumbling Tumbleweeds." In 1938 Slye was working on a picture with Gene Autry when Autry walked off the picture. Slye took the name Roy Rogers and the lead in Under Western Stars. As Rogers spent more time with his film career other performers were added through the years. Ken Curtis, best known as TV Gunsmokes's Festus, sang with the group from 1949-53. The Sons appeared in an eponymous film with Roy Rogers in 1942. The current group still performs regularly in Branson Missouri. The group has been designated a "National Treasure" by the Smithsonian Institute and ahs a star on the Hollywood Walk of Fame at 6845 Hollywood Blvd.  Guest stars of the broadcast include Danny Thomas, Dick Powell, Lawrence Welk, Michael Ansara, Robert Cummings, Ernie Ford, and more!

These short recordings, produced by the Ad Council in 1959, feature the "voice" of Smokey inviting us to "a Little Visit with a Big Star." The Star will discuss with Smokey some of the ways that:

"You can Prevent Forest Fires."