Hosted by Broadway Producer Hunt Stromberg Jr., he had a eye for talent and showcased who he found on the New York Nightclub Scene.

Choose your CD format
or order disks individually: Add to Cart Add to wishlist
Play a sample episode from July 01, 1947:

The whole concept of the Mutual Broadcasting System was that member stations would create their own original programs, and the other stations in the network would choose which programs would appeal to their local audience. This made sense for shows with nearly universal appeal like The Lone Ranger, Major League Baseball games, or news reported by Gabriel Heater. Shows about the local scene should not have been popular across the whole network. It is a testimony to the importance of New York as an entertainment capital that Scout About Town became such a hit. 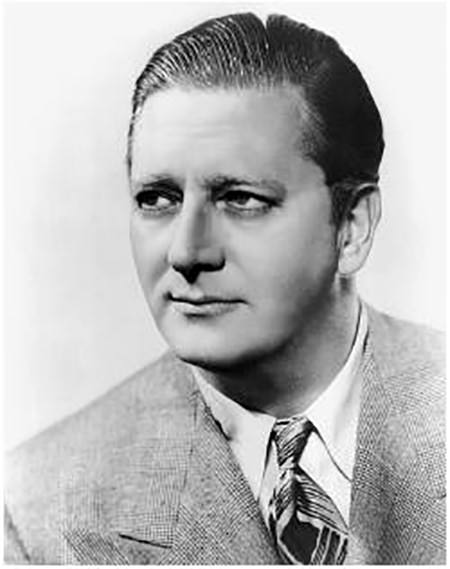 The program got its start at the end of the War, and was hosted by up and coming Broadway producer Hunt Stromberg Jr. Stromberg's father had been one of the executives who helped to make MGM one of the most important studios in Hollywood and had a hand in producing the Nelson Eddy/Jeanette MacDonald operettas, The Thin Man series, 1936 Academy Award-winning The Great Ziegfeld, and several others. Hunt Jr. made the move to Broadway, in part to move from under his father's shadow, and became the youngest producer on Broadway at 23 with hits like The Red Mill (1945), The Front Page (1946) and Sally (1948).

Stromberg soon built a reputation for having an eye for talent as he made his way through the New York nightclub scene, and he showcased some of that talent in Scout About Town. He would find greater notoriety when he returned to Hollywood to become program director for KABC-TV. One of his biggest coups came when he met a pretty young Finnish girl at a costume party who was dressed as a ghoul like Morticia Addams from the cartoons in The New Yorker (pre-dating the Addams Family TV sitcom). Eventually, Hunt was able to reconnect with Maila Nurmi and together they created Vampira, a late night TV Horror Host in the tongue-in-cheek tradition of Raymond from radio's The Inner Sanctum Mysteries.

When Stromberg returned to California, Scout About Town needed a new host, so WOR disk jockey Barry Gray was pressed into service. When Gray was working for New York rival WMCA a few years previously, he grew bored one night from simply "spinning platters", so when a caller rang the studio telephone, he put the receiver up to the broadcast microphone and became the "Father of Talk Radio". The fact that the caller happened to be bandleader Woody Herman certainly helped the stunt, but WMCA management did not approve, leading to Gray's move to WOR and the Mutual Network.

One of the features of Scout About Town was the "Award of the Week". Near the end of the quarter-hour broadcast, Gray would read a proclamation which listed the guest's accomplishments and a prediction of great things in the future. Guests included Mitzi Green, Martin and Lewis, Morey Amsterdam, Bobby Breen, Annamarie Dickey, and Dorothy Sarnoff.