Although he built a reputation as one of the greatest British Actors of the post-War period, Richard Burton lived a life beset with scandal and debauchery. 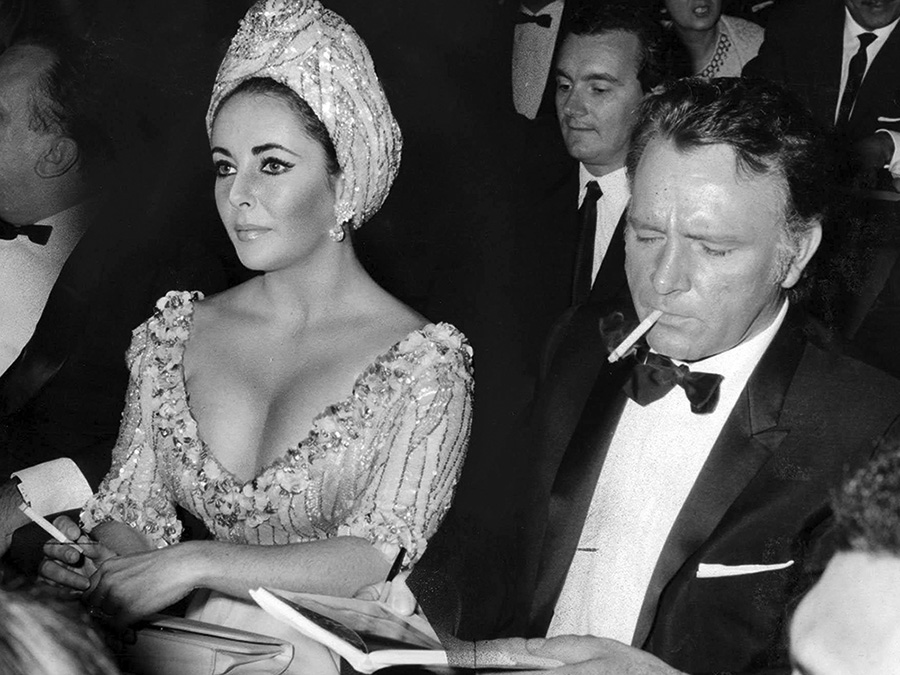 Some Hollywood names seem to have a greater association with scandal than for their body of work, and few names bring up more scandal than Richard Burton. Any mention of Dick Burton will bring to mind  "Dick and Liz", Elizabeth Taylor being another great talent who became better known for scandals than her work. Looking at Burton's story, it becomes obvious that he was a figure destined for tragedy, yet these are the elements which brought him to the status of being the greatest British actor of the post-War era. 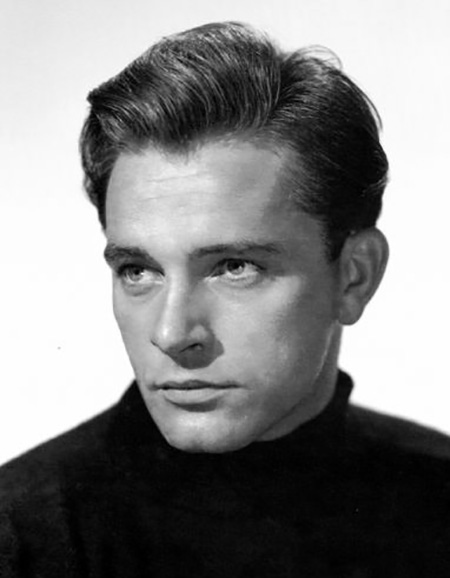 Born Richard Walter Jenkins in Pontrhydyfen, Wales, 1925, he was the twelfth of thirteen children born to a hard-drinking coal miner and his barmaid wife. Two years after Dick came into the world his younger brother Graham was born and their mother died six days later. His father was a "twelve-pints-a-day man", so Dick went to live with his older sister, Cecilia, and her husband and children. He would later state that "my sister, had become my mother, and more mother to me than any mother could ever have been".

Young Richard showed a considerable talent for singing and elocution, winning prizes which helped him to be selected for secondary school. This was a great source of pride for his often-absent father and older siblings, Richard was the first Jenkins to reach secondary school. Hoping to further his success, he sought the tutelage of his school headmaster in singing a complicated piece, "Orpheus and his Lute". The headmaster, future Broadway director Philip Burton, was quite taken with the lad and did what he could to encourage the boy's studies.

When Cecilia's husband became too ill to work in the mines, Richard left school in 1941. About this time, he also discovered an affinity for drinking, smoking, He joined the local Air Training Corps as a cadet in the RAF. His squadron commander was his former schoolmaster, Philip Burton, who took this chance to redirect Richard back toward literary and theatrical pursuits. Philip tried to adopt Richard (but was twenty days too young for the adoption to be legal). Richard did become Philip's ward and took his surname. Richard began working for the BBC as well as appearing in amateur stage productions. On Philip's recommendation, he was able to enter Exeter College at Oxford in a program for RAF cadets prior to their active service.

Disqualified as a pilot due to poor eyesight, Richard trained as a navigator while continuing to appear on the British radio. His drinking, smoking and womanizing increased during this period, and he was discharged from the RAF at the end of 1947. Burton moved to London to join the HM Tennent Ltd acting company, and while touring he was given a screen-test for The Women of Dolwyn (1949), marking his film debut. On the set, he was introduced to actress Sybil Williams, who became the first Mrs. Richard Burton.

Marriage to Sybil seemed a complete success. She retired from acting, they would have two daughters and Burton signed a £100/week contract with Alex Korda. However, the day after the wedding, Burton began an affair with then-seventeen-year-old actress Clair Bloom. This would be far from being Burton's last indiscretion, however, they were largely unseen as his star continued to rise. Burton was cast to support John Gielgud in the touring company of Christopher Fry's The Lady's Not for Burning in 1949, and he played Prince Hal in Shakespeare's Henry IV, Parts 1 & 2 at Stratford-upon-Avon in 1951, also appearing as Henry V and in The Tempest during the season. Burton made his Hollywood debut when Korda loaned him to MGM to star in My Cousin Rachel (1952) with Olivia de Havilland. 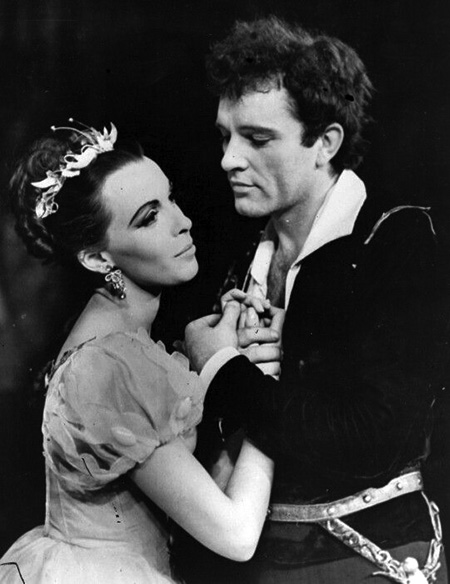 Burton's arrival in Hollywood came while the studio system was on its last legs. Following Rachel, he starred with James Mason in The Desert Rats (1953) and appeared in the first CinemaScope picture, The Robe (1953). Studio boss Daryl F. Zanuck offered Burton a seven-year/seven-picture contract for $1 million, but he turned it down because he was planning to play Hamlet at London's Old Vic Theatre that season. At a party celebrating the success of The Robe, he met a pretty actress named Elizabeth Taylor, but he made an unfavorable first impression, possibly due to nervousness over upsetting the studio system by turning down such a large contract but also for his upcoming role as the Prince of Denmark. His buddy Humphrey Bogart had quipped: "I never knew a man who played Hamlet who didn't die broke."

After the season at the Old Vic, burton's Hollywood come-back began with The Prince of Players (1955), panned by critics as "the first flop in CinemaScope", but he followed up with Alexander the Great (1956). Shot mostly in Spain, the picture teamed him with old flame Claire Bloom (she had also played Ophelia with him in Hamlet). The picture failed to meet box office expectations. In fact, Burton's career basically foundered until he appeared on Broadway in Camelot (1960, 873 performances). The show was in trouble during pre-production, running some five hours. When director Moss Hart fell ill, Burton drafted his old mentor Philip Burton who managed to condense it to three hours. Burton went on to appear in the All-Star ensemble cast of The Longest Day (1962) as an RAF fighter pilot. And then, there was Cleopatra (1963).

The filming and fall-out of this sand-and-sandals epic is a fascinating tale on its own, but the most infamous result of the picture which nearly bankrupt 20th Century Fox was the phenomenon of "Dick and Liz". By the time production began, Elizabeth Taylor had become one of the most bankable-ladies in Hollywood and she was on her fourth marriage to singer Eddie Fischer. The circumstances which brought Liz and Fischer together include scandals which are worthy of their own post, but for this discussion, it is important to know that she sought the comfort of Fischer's arms after her third husband, director Mike Todd, was killed in a private airplane crash. Eddie Fischer had been a friend of Todd's, but he simply was not "man enough" to tame the passionate Taylor. Her newest co-star in Cleopatra, the incredibly virile Burton, may have been. 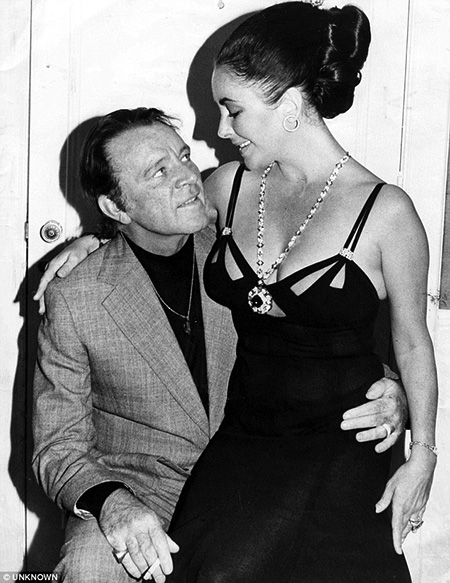 It seems unbelievable to think that Sybil would have been unaware of Burton's serial infidelity to this point, but when the affair taking place on the sets of Cleopatra became headline news, she fled and at first, Burton apologetically followed. Taylor, perhaps unsatisfied with Fischer, continued to pursue Burton with the aid of producers who could see the dollar-signs resulting from casting the power couple together as much as possible. Burton divorced Sybil after shooting wrapped on The VIPs (1963) and Fischer divorced Taylor in March 1964 and Liz and Dick transitioned from scandalous adulterers to married couple nine days later.

With a reputation as the most desirable woman in the world, Liz thought she could prevent Dick's wandering and warned him that she would not tolerate infidelity. Nonetheless, Burton's affections began to wander as soon as they were working on separate projects. Their work together on Who's Afraid of Virginia Woolf? (1966) was thought to be representative of their own tumultuous relationship. Although she was not part of the project, Liz was on the set every day during the shooting of Anne of a Thousand Days (1969) which co-starred Geneviève Bujold, one of her husband's former conquests. The strain of distrust combined with media pressure finally became too much and Liz and Dick divorced in June 1974, only to remarry in October 1976. The "double-marriage of the Century" finally came to an end in July 1977. Liz later stated, "After Richard, the men in my life were just there to hold the coat, to open the door."

By this time, Burton's life of heavy drinking and smoking were taking a heavy toll on his health, but he refused to seek any sort of treatment. On August 8, 1984, Richard Burton died of a brain hemorrhage at his home in Switzerland. He was 58. A Star on the Hollywood Walk of Fame for Richard Burton's contributions to Motion Pictures was posthumously dedicated in 2013 at 6336 Hollywood Blvd.