A relative late-comer to the Radio Anthology genre, Radio City Playhouse set new standards of quality for radio anthologies. By the late 1940’s, the center of radio network production had moved to the West Coast, but there was still a lot of talent in New York to be featured on the anthology Radio City Playhouse.

Choose your CD format
or order disks individually: Add to Cart Add to wishlist
Play a sample episode from April 25, 1949:

"Witness For The Prosecution"

One thing Radio broadcasters did better than artists in any other medium, with the possible exception of print, was to present anthology collections. There were Repertory Companies in live theater where the company would produce several plays each season. This would keep the audience engaged over several productions, and the players would often share exposure by taking supporting roles in a few shows and be given an opportunity to star in one or two. The challenge was learning several different parts, and the company had to build and store different sets and costumes for each play in that season's repertoire.

Radio writers and Sound Effects Technicians were able to create a sense of place and character without sets or costumes. Acting on the radio made different demands on actors, as well. The radio actor had only his voice to convey a character, he could not depend on costumes, makeup, or even body language. Rehearsals for radio plays were also less intensive. The blocking or the actor's movements on stage were not an issue. They had to be familiar enough with the material to know when their cues were coming, but the actors didn't even have to learn their lines, they could read from the scripts they held in their hands.

Anthology programs are possible on Television, but they faced some significant limitations there, as well. A Star actor generally had to be used once then replaced in the next week's episode or become the leading player in the entire series. Not only were actor repetitions unwelcome in TV anthologies, new sets and costumes had to be used in each episode.

In the late Forties and early Fifties, TV broadcasting technology was still primitive enough that it could not match the production quality of a radio play, anyway. Also, by this point, most serious radio production had moved to the networks' West Coast facilities where they could take advantage of the name recognition of Hollywood talent. There was still a deep talent pool in New York City, and that was where the networks were still headquartered. 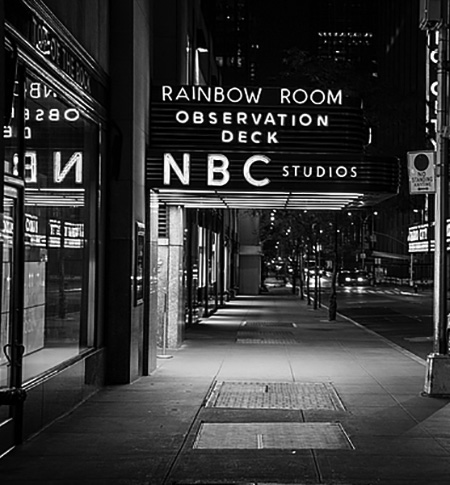 The Radio City Playhouse, which broadcast from NBC's New York Studios in Rockefeller Square, was a late-comer to the anthology genre but quickly established itself for doing things its own way and doing them very well. Harry W. Junkin directed and wrote several of the scripts, and Richard McDonagh was overall in charge of production. While other radio anthologies took stories from a certain type of source, such as literature, stage plays, or movies, or produced stories from a certain theme or genre like horror, science fiction, romance, Western, mystery, or adventure, Radio City Playhouse was willing to use a story from anywhere, as long as it was "good".

The first episode, "Long Distance", broadcast on July 3, 1948, and starring Jan Miner, portrays the frustration of a young wife trying to get a long-distance phone call through to California in time to save her husband from being executed in the electric chair. The episode is often favorably compared with Agnes Moorehead's performance in "Sorry, Wrong Number" on CBS's Suspense.

Stories could be thrillers, farces, tales of the supernatural, boy-meets-girl romances, or a morality tale. The series was limited to three seasons, from July 1948 to January 1950, partially due to increasing competition for TV and also because the show was sustained for its entire run, never picking up a sponsor.

These half-hours of drama and sometimes comedy were often very exciting and suspenseful. The cast was very good New York veterans of radio and stage, including Jan Minor and John Larkin as featured performers. The director, Harry W. Junkin, also served as the show's host and narrator. Each week the show introduced a new story, often written by well-known writers of fantasy and suspense such as Ray Bradbury, Cornell Woolrich, Agatha Christie and Paul Gallico. They were dramatized with a full orchestral soundtrack and excellent sound effects.

Although overshadowed by the earlier classics of anthology such as the Lux Radio Theater, the Radio City Playhouse is fondly remembered for its solid dramatic content, and quality radio acting. One of the dramas, "Long Distance," starred Jan Minor as a distraught wife trying to reach a judge on the West Coast to sign an immediate stay of execution that will take her innocent husband's life in a matter of hours. That show is considered as a classic that ranks with Lucille Fletcher's "Sorry, Wrong Number," starring Agnes Moorehead of Suspense fame.

For more dramatic anthologies, please see Lux Radio Theater, Mercury Theater and Campbell Playhouse (separately, or in the Orson Welles collection.)  For anthologies of well-known suspense tales, you should see Escape and Suspense.