Old-time radio enthusiasts can't miss a show by one of the most prolific and clever performers of his time..

Choose your CD format
or order disks individually: Add to Cart Add to wishlist
Play a sample episode from November 27, 1947: 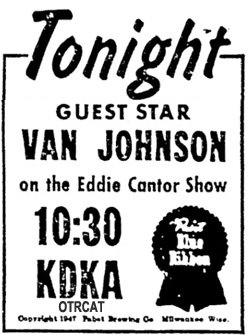 His radio career in the 1920s with several appearances on the radio but his debut is generally considered to be his guest starring appearance on Rudy Vallee's Radio show in 1931. That appearance lead to his own show, sponsored by Chase and Sanborn. Eddie hosted several comedy/variety radio shows over the years with different sponsors. In 1946, Pabst Blue Ribbon Beer took over sponsorship of the show from the previous sponsor. Pabst stayed for three years.

The Pabst Show was also in the comedy/variety category. His guest stars featured famous people like Al Jolson, Audie Murphy, and Jack Benny. There were also guest stars who were not famous like Eddie's fourth grade teacher, the postmaster for Los Angeles and others. His shows featured music, skits, and interviews. Eddie made it a habit to find, or "discover" new talent and bring them on the show. Over the years, they introduced many such discoveries like Dinah Shore and Eddie Fisher.