The most decorated soldier of WWII, Audie Murphy went on to enjoy a twenty-year career in Hollywood.

Choose your CD format
or order disks individually: Add to Cart Add to wishlist
Play a sample episode from August 16, 1960: 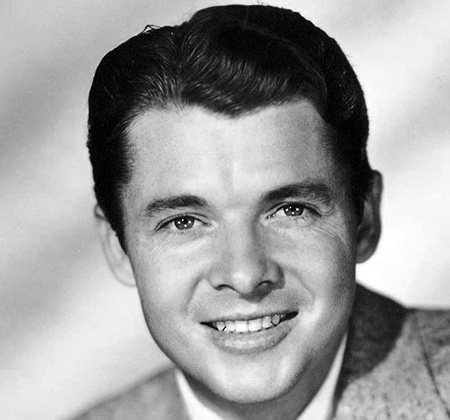 Several of the most respected voices in OTR, indeed in Hollywood as a whole, answered when their nation called and acquitted themselves with honor. Not everyone could serve on the front lines, of course, and we make no distinction whether a vet's service involved flying combat missions in enemy skies, storming the beaches of Normandy, manning the recording booth at the Armed Forces Radio Service studios in Hollywood, or cooking powdered eggs in Omaha, the fact that they were willing to wear their country's uniform and contribute to something so much bigger than themselves makes them worthy of our admiration and respect.

While we honor the service of every veteran, there are certain those whose service stands out. The most prominent of these would be that of Audie Murphy, one of the most decorated soldiers to serve in the Second World War. Murphy was born into a sharecropper's large family in Hunt County, Texas. His father abandoned them and Audie left school in the fifth grade to find work to support the family. About the only job available to a barely educated boy was picking cotton, but it was Audie's skill with a hunting rifle which kept food on the table. His mother died in 1941 of pneumonia when Audie was just 16. 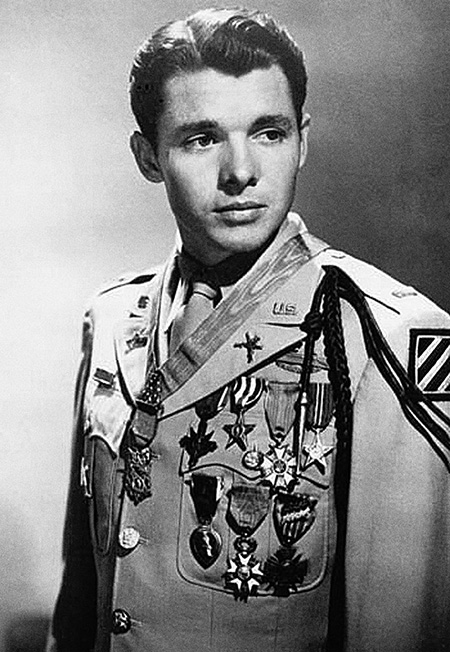 Audie had wanted to be a soldier his whole life and tried to join as soon as he heard the news about Pearl Harbor. However, he was denied entry into the service because he was too young and too small. Finally, his older sister helped him to falsify some paperwork and he was accepted into the Army on June 30, 1942. After basic training at Ft. Wolters and Advanced Infantry Training at Ft. Meade, Murphy was shipped to Casablanca as a private to join 3rd Infantry Division under Gen Lucian Truscott. He was a division runner and promoted to corporal just after landing in Sicily with the Division.

Although the slight Murphy was occasionally sidelined by illness, he managed to find himself in the thick of things quite often. Decorations for Valor and promotions came with stunning frequency. Audie Murphy would be awarded every combat award for valor available to Army personnel, including French and Belgian awards. A battlefield commission to 2nd Lt came in October 1944, and the 19-year-old Murphy found himself a platoon leader commanding troops ten years his senior. His combat effectiveness and zeal for getting the job done made him an effective commander.

In January of 1945, Murphy's unit was fighting in the Colmar Pocket in the Alsace region of France, and he was ordered to hold a vital roadway until reinforcements could arrive. The cold afternoon stillness was broken as an enemy artillery barrage opened up on his position, and he saw 250 German troops and six tanks coming out of the woods. Murphy ordered his men to fall back to prepared defensive positions, but he stayed at his command post, calling in artillery support fire (the artillery commander asked how close the enemy was to the young lieutenant's position, Murphy shouted back "Just hold the phone and I'll let you talk to one of the bastards!") A nearby tank destroyer was hit and began to burn, but Murphy saw that the 50 caliber machine gun mounted on the vehicle was still serviceable. Using the smoke as a screen, he fired burst after burst to hold back the enemy (standing on the burning vehicle, he later noted that his feet were warm for the first time in three days) while directing artillery over the field telephone. Although he sustained a shrapnel injury, he did not give up the tank destroyer until he was out of ammunition. When he returned to his men, rather than being evacuated with his wounds he organized a counter-attack which drove the Germans back into the woods. 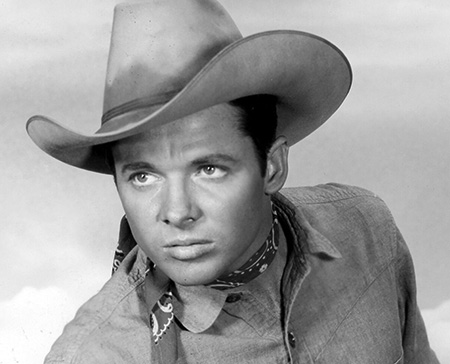 Second Lt Audie Murphy was awarded the Congressional Medal of Honor for his actions in the Colmar Pocket. Somewhat ironically, the Army decided that the celebrity which came with the Medal of Honor made Murphy too valuable to risk in combat, and he was reassigned as a liaison officer until the end of the War. He returned home in July 1945 to a hero's welcome complete with parades and his picture on the cover if Life magazine.

Screen legend James Cagney advised Murphy that his new found celebrity and boyish good looks would make him an almost instant Star in Hollywood. The Westerns which were still popular were a natural fit for the Texas Native, and Murphy made more than 40 movies in his twenty year Hollywood career, including playing himself in To Hell and Back (1955) for Universal which was loosely based on his autobiography. The picture would be Universal's most profitable film until Jaws came out in 1975.

Murphy juggled his film career with service in the Texas National Guard and helped to drill recruits when National Guard elements were called to service in Korea. Despite his success, Murphy battled with depression and anxiety after the War (it is recorded that he slept with a loaded 45 Colt Automatic under his pillow and was reduced to tears when shown footage of German War orphans). It is now recognized that he was suffering from Post-Traumatic Stress Disorder or PTSD. Murphy used his celebrity to fight for Veterans Rights for soldiers returning from Vietnam, recognizing that he had insight into the struggles they were facing. 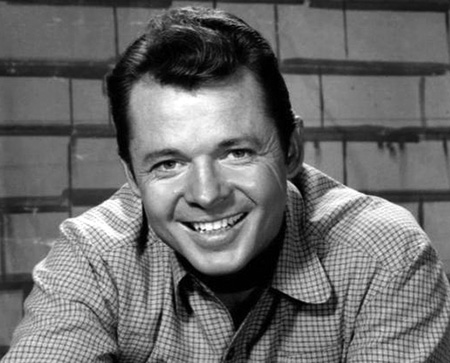 On May 29, 1971, a private plane in which Murphy was a passenger crashed into Brush Mountain, Virginia, killing all aboard. Major Audie L. Murphy was buried with full Military Honors in Arlington National Cemetery.

A Star on the Hollywood Walk of Fame at 1605 Vine Street honors the contributions to Motion Pictures made by Audie Murphy.

Major Murphy's gravesite at Arlington is in Section 46, headstone number 46-366-11, located across Memorial Drive from the Amphitheater. Traditionally, the headstones of Medal of Honor recipients in Arlington are decorated with gold leaf, but Murphy requested that his remain plain and inconspicuous. Nonetheless, it is the second most visited grave in the National Cemetery after that of President John Kennedy.