Choose your CD format
or order disks individually: Add to Cart Add to wishlist
Play a sample episode from July 25, 1946: 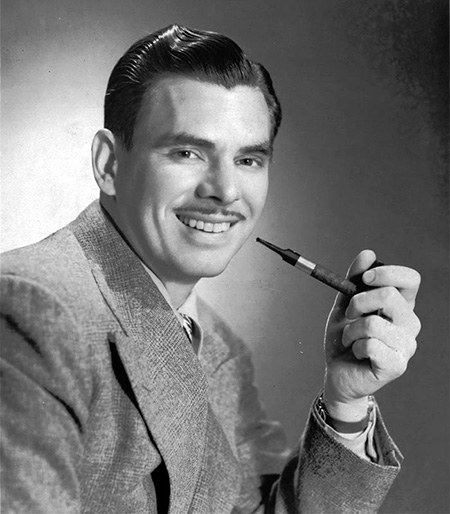 No matter how much we compare radio drama with television and movies, all three of them are essentially ways to tell stories. Film has the spectacle and glamor, TV may be the most profitable, and the stories we hear over the radio may be the most personal because so much of the action takes place in our own imagination. Focusing on the differences between the three mediums tends to obscure the fact that the most important element is the story.

Considering that storytelling was the network's stock-in-trade, it seems a little surprising that someone could become NBC's resident storyteller, but that is the role that Nelson Olmstead carved out for himself. It is even more surprising that Olmstead found his greatest success in radio just as television was entering its own golden age.

Leroy Nelson Olmstead, Jr, was born in Minneapolis, Minnesota, 1914, and grew up in Texas. While attending the University of Texas at Austin, he became friends with classmates Walter Cronkite and Eli Wallach. He also met and eventually married Alma Holloway. The friends all held acting as a common interest and became involved in amateur productions at the University and in community theater around Austin. While many of his friends made their way to New York to take up the struggle of journeyman actors, Olmstead found a job with WBAP Ft Worth. He began working as an announcer but wanted to get back into acting. Although radio drama is relatively inexpensive, there was no budget for even that. He developed the most inexpensive dramas he could, taking stories from literature and reading them on the air.

Olmstead was always a big fan of Edgar Allen Poe, calling him "that great dramatist who never wrote a play". What developed was a 30-minute late night horror program titled Black Night (1937-39). The station received fan mail for the program from as far away as the upper Midwest, and since WBAP was a Red Network affiliate, it was only a matter of time before NBC took notice.

In 1938, Olmstead began working from NBC's Radio City in New York. In addition to Black Night, he was assigned to The World's Greatest Short Stories. His early stint at NBC was interrupted by a two-year hitch in the Army who sent him to Italy where he kept doing essentially the same thing for AFRS. There have been a number of "one-man-shows" during the Old Time Radio Period, but Olmstead's work is unique in that he truly let the stories speak for themselves. Most actors would create a whole different voice for each character in a story but Olmstead kept to simple changes in inflection and timbre. His style is best described as "an expressive monotone".

A Halloween tradition has grown in some areas during the days leading up to the spooky holiday of dusting off the LP version of Olmstead's most popular radio achievement, Sleep No More. The program aired in 1956-57, and probably would have lasted longer if the network had still been interested in radio success rather than making programming for the shiny box that had begun glowing in living rooms across America. Sleep No More was popular enough that Vanguard Records cut a master from the magnetic tape recordings of the program, and released the album at least three times.

Nelson Olmstead made a few television appearances before creating Sleep No More, including the TV version of Lights Out, The Schlitz Playhouse, Tales of Tomorrow, and Kraft Theatre. He appeared in cinema in a few small character roles, including the photographer in Butch Cassidy and the Sundance Kid (1969). He died at the age of 78 at a nursing home in Torrance, California, from complications due to a stroke on April 8, 1992.