Featuring Chicago Jazz which was generally more sophisticated than New Orleans and the Dixieland sound but placed a stronger emphasis on individual improvisation.

Choose your CD format
or order disks individually: Add to Cart Add to wishlist
Play a sample episode from March 14, 1953:

Several elements came together during the early decades of the Twentieth century to create what would be known as Chicago Jazz. The most obvious and most important was the great migration of rural African Americans from the South seeking better economic opportunity. Dixieland or Hot Jazz also moved north and became popular in the speakeasy dominated nightlife of gangster-era Chicago. Chicago's first Jazz age gave us immortal artists like Louis Armstrong, King Oliver, Jellyroll Morton, Bix Beiderbecke, Benny Goodman, and several others. 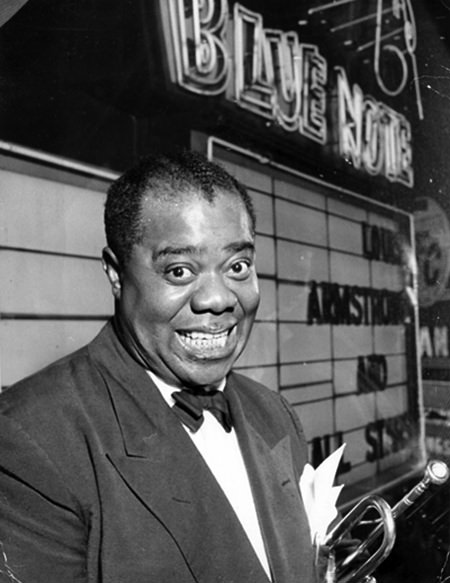 Chicago Jazz was generally more sophisticated than New Orleans and the Dixieland sound but placed a stronger emphasis on individual improvisation. When the great Chicago Jazzmen took their bands on the road, this spirit of improvisation helped to lay the foundations of what would become Swing Jazz. Big Band Swing Music became the de facto soundtrack for America's involvement in the Second World War, but it also helped set Chicago Jazz on a back burner.

Chicago Jazz would experience a renaissance which would come to full bloom during the Fifties (and continues to this day) at a club at 45 West Madison Street, near Dearborn, called the Blue Note which was opened by Frank Holzfeind. Frank had given up on his own musical career years before, but his love for Jazz would help the art form to hang on and expand into the Twenty-first century. Holzfeind (rhymes with "find", not "fiend") came to Chicago from his native Milwaukie in 1920 with a buck and a half in his pocket, four-bits of which went towards a room at the YMCA. He got a job as a machinist but the factory closed down, so he got on as a brush salesman. "My customers used brushes primarily for two things: scrubbing whiskey bottles and toilet bowls. I was known as the company specialist in those fields. They weren't the same brushes, of course."

From brush sales, Frank transitioned to a clerking job with the Chicago and Northwestern Railway. He stayed with the railroad for more than twenty years but never seemed content with a desk job. He sidelined by starting a newsletter for the company bowling league and wrote a pamphlet on Public Speaking for Railroaders. In 1942, he was offered the chance to manage a bowling alley. There was a tavern attached to the lanes, and Holzfeind hired Jazz pianists to play on occasion. The bowling alley burned to the ground in 1945, but Frank and the owner were able to save more than 1000 bottles of booze before the end. That hooch would become the basis for the new club at 56 Madison.

According to people who knew the Blue Note, Holzfeind's fatal flaw was that he was a music lover first and a businessman later, if at all. The Chicago Jazz renaissance he helped to spark became his downfall. It was said that Frank was as good to his audiences as he was his musicians, but as the acts became more expensive he refused to raise his prices and had to fold in 1960.