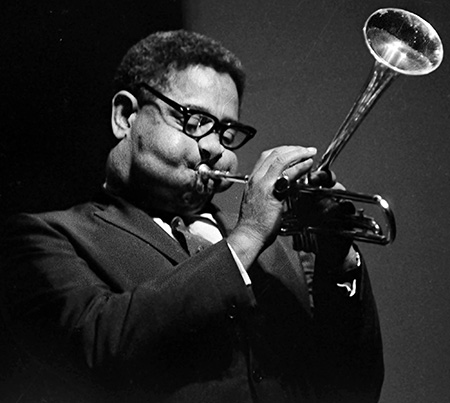 The Rock and Roll Era is filled with acts which became popular for their visual gimmicks as much as their musicianship. This is largely because Rock is a product of the Television Age, and a gimmick could provide a visual hook that helped to bring fans to shows and eventually sell a bunch of records. The Jazz and Bebop greats who came before the Ae of Rock were exciting to watch for their musicianship and showmanship. Dizzy Gillespie may be the exception that proves the rule.

With his horn-rimmed glasses (similar to Buddy Holly's), bent horn, and bulging "bullfrog" cheeks, Gillespie was instantly recognizable to even to non-Jazz fans, but these "gimmicks" were not part of the act, rather they were simply part of what Dizzy needed to make music. His trademark bulging cheeks are the result of years blowing the trumpet, resulting in a condition which is also referred to as "glassblower's disease", the cheek muscles becoming distended from years of strain.

Gillespie's bent horn was the result of an accident backstage during a 1953 performance. The horn was resting on a trumpet stand, which is designed to protect the instrument. Nonetheless, when someone fell on the stand the entire bell of the horn was bent upward. After the accident, Dizzy blew a few notes and decided that the horn actually sounded better and the upward angle projected the sound over the audience so it better reached those in the back of the club. 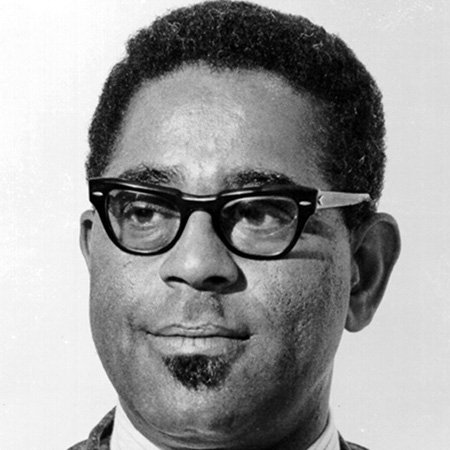 Born John Birks Gillespie in Cheraw, South Carolina, 1917, he was the youngest of nine children born to James and Lottie Gillespie. His father was a local bandleader, which meant that instruments were available to all the children Gillespie began to learn piano at the age of four and taught himself trombone and trumpet by the time he turned twelve. After his father passed away, his mother relocated the family to Philadelphia. By the mid-1930s, Gillespie was playing with various bands on the Baltimore-Philadelphia-New York circuit. Cab Calloway hired Dizzy in 1939 and recorded some of Gillespie's compositions. However, Calloway disapproved of Gillespie's undisciplined attitude and "creative" improvisations. Their dispute came to a head during a rehearsal when the bandleader blamed Dizzy for throwing a spitball which quickly escalated to a fist- and then knife-fight. When they were separated, Gillespie was fired. By now, he had experience writing for other big band leaders and he began playing on a freelance basis.

Gillespie was listed as 4F during the War but was kept from working by the recording industry strike. While his audience was restricted, he helped Charlie Parker and others develop the Bebop style which took listeners by storm when new recordings began being made again. During the late 1950s, the State Department sent Gillespie on a series of tours through the Middle East and other regions as an "Ambassador of Jazz". He usually came back from these trips adding more world-influenced sound to his own material. In the early 1980s, Gillespie led the United Nations Orchestra.

Gillespie succumbed to pancreatic cancer on January 6, 1993, at the age of 75. A Star on the Hollywood Walk of Fame at 7057 Hollywood Blvd honors Dizzy Gillespie's contributions to recording.