Mummies and the Mummy's Curse in Old Time Radio

Enjoy these tales of superstition run amok. "I want my Mummy!"

Choose your CD format
or order disks individually: Add to Cart Add to wishlist
Play a sample episode from June 13, 1945:

After the spark of life leaves most organisms, the forces of the natural world usually act quickly to decompose the body. Even if the body is buried, microscopic organisms and worms quickly dispose of the flesh and internal organs, it is just a matter of time before the bones themselves dry and crumble to dust. However, there are mechanisms, but nature and man-made, which serve to preserve the deceased. These include extreme dryness or cold, chemical treatments, or storing in a low-oxygen environment. This process is normally referred to as mummification. 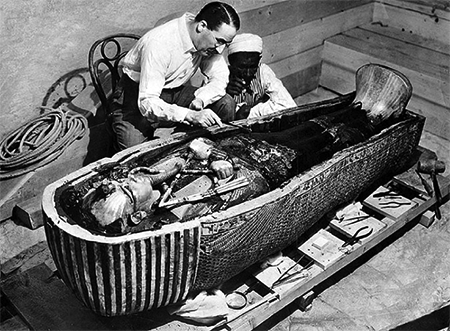 One of the Earth's earliest civilizations arose in North Africa in the region where the Nile River brings fertility to the Sahara. This fertility gave rise to a people who would develop a complex writing system, the Great Pyramids, and a sophisticated religion based on an Afterlife. To make it through the Afterlife, the deceased's body needed to be protected and preserved through mummification.

Because of its importance to religion, ancient Egyptian priests became experts in mummification. The arid environment of North Africa certainly helped, but the real art of mummification came through preparing the bodies with herbs, spices, special chemicals, and elaborate wrappings. Supposedly, the mummies of important people were further protected with elaborate curses which would affect any who disturbed the mummy's rest.

The Mummy's Curse is usually written off as superstition run amok, although there are historical cases where the curse seems to have some validity. The most notable is Howard Carter and the discovery of Tutankhamun's tomb in 1922. Most Egyptian tombs which had been previously discovered had been targeted by graverobbers, and therefore of decreased value to the scientific community. King Tut had been a lesser king, but his tomb was isolated enough that it had not been disturbed before Carter's discovery. However, the sudden and supposedly mysterious deaths of people associated with Carter and his work began to give credence to the Curse.