Born in 1910, Mother Teresa was recognized as a national hero in India for her work with the poorest of the poor.

A saint is someone who is recognized for having an exceptional amount of holiness or has an incredible "likeness to God". Anyone who has died holding true faith in the Father and gone to heaven can be considered a saint, but there are some persons whose life and works are considered so remarkable that they are listed on the Canon of Saints by the Church. 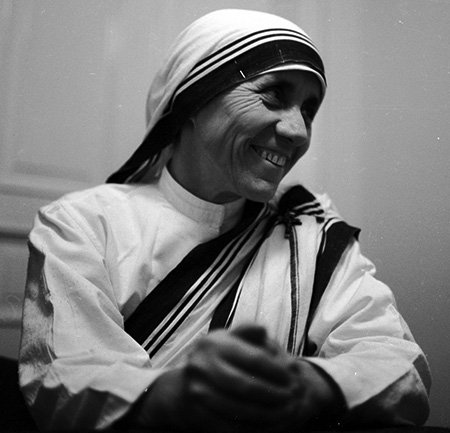 Some of the earliest recognized saints were the Martyrs whose faith was so great that they gave up their lives rather than abandon it. In the fourth century, "confessors", those who confessed their faith not by dying but through their life and works, began to be venerated as saints. Most of the saints venerated by the Catholic Church died before the twelfth century, but some of the most inspirational works were done by Saints in living memory. Saint Teresa of Calcutta, also known as Mother Teresa, may be one of the most notable.

Born Anjezë Gonxhe Bojaxhiu in Skopje, Macedonia, 1910, then part of the Ottoman Empire. Anjezë's family was of Albanian descent, and her father active in Albanian politics (it should be noted that the Albanian people suffered persecution and genocide under the Ottomans during the First World War on a scale similar to that of the Jews under Nazi Germany). After her father died when she was eight, Anjezë (or Agnes) became fascinated by stories of missionaries serving in Bengal and began making pilgrimages to the shrine of the Black Madonna in Vitina. When she turned eighteen, Agnes left home to join the Sisters of Loreto at their convent in Ireland where she studied English. A year later, in 1929, she was transferred to a convent in Darjeeling to begin her novitiate. She took her solemn vows in 1937 and took the name of Thérèse de Lisieux, the patron saint of Missionaries (she adopted the Spanish spelling of the name to avoid confusion with another sister at the convent who had taken the name). Teresa began teaching at the convent school in Calcutta, which made her very happy but she became increasingly disturbed by the enormous poverty she could see just outside the convent walls. 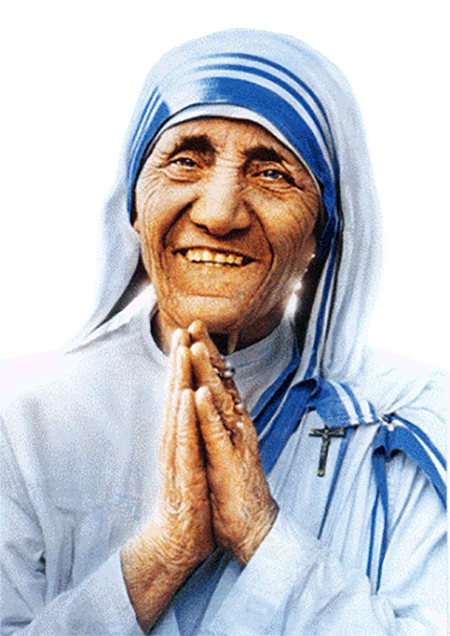 Although she was named headmistress of the school in 1945, a year later while traveling on her annual retreat from Calcutta to Darjeeling, she received what she later described as a "call within the call", "I was to leave the convent and help the poor while living among them. It was an order. To fail would have been to break the faith." She left the convent, discarded the traditional Loreto habit in favor of a simple white cotton sari with a blue border, and with no direct financial support from the convent or the Church, began tending to the "poorest among the poor", often forced to beg for food and supplies.

Her mission grew until in 1950 she received permission from the Vatican to establish a new order which would become the Missionaries of Charity, caring for "the hungry, the naked, the homeless, the crippled, the blind, the lepers, all those people who feel unwanted, unloved, uncared for throughout society, people that have become a burden to the society and are shunned by everyone". Attracting contributions and converts, the congregation was able to open schools, hospices, orphanages, and leper houses throughout India.

While visiting Pope John Paul II in Rome in 1983, Mother Teresa suffered a heart attack. She was given an artificial pacemaker after a second cardiac episode in 1989 and suffered a bout of pneumonia in Mexico City in 1991. At this time, Teresa offered to step down as head of the Missionaries of Charity, but her sisters asked her to stay on and she accepted. Her collarbone was broken in a fall in Calcutta in 1996, and four months later she contracted malaria and suffered heart failure. Although she underwent heart surgery, her health continued to decline. Mother Teresa resigned her position as head of the Missionaries of Charity on March 17, 1997, and she passed away on September 5.

During her lifetime, Mother Teresa was recognized as a national hero in India for her work with the poorest of the poor. She received the Ramon Magsaysay Award for Peace and International Understanding ("the Nobel Prize of Asia") in 1962, and the Nobel Peace Prize in 1979. President Reagan awarded her with a Presidential Medal of Freedom in 1985 and was made an Honorary Citizen of the United States in 1996 (only eight persons have been so honored, and only Teresa and Winston Churchill were given the honor during their lifetimes).

The Vatican began the process of Teresa's beatification following her death, and she was canonized by Pope Francis in a ceremony in St. Peter's Square in Vatican City on September 4, 2016.