"I'm Back In The Saddle Again, Out Where a Friend is a Friend…"

In 1933, "Poverty Row" studio Monogram Pictures had a rising Western Star in its stable named John Wayne, who was cast in Riders of Destiny (1933) as "Singin' Sandy Saunders". It was only the second time a Singing Cowboy had been featured in a Hollywood Picture, the first was Ken Maynard in The Wagon Master (1929, Ken Maynard Productions). The problem with Destiny was that Wayne couldn’t sing and the singer used to dub his songs (the director's son) sounded nothing like the actor's distinctive speaking voice. The Poverty Row Studios loved the idea of a Singing Cowboy, but it was not going to be John Wayne. 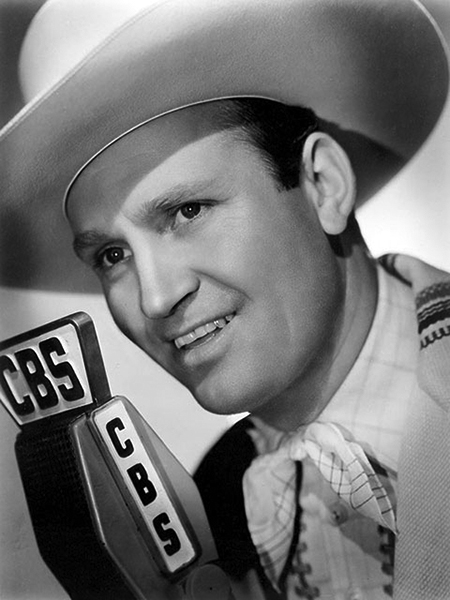 Orvon Grover "Gene" Autry was born in Tioga, Texas, 1907, and grew up loving to sing. While a schoolboy, he was noted for carrying his guitar with him everywhere. He dropped out of high school in 1925 to take a telegrapher's job with the St. Louis-San Francisco Railway. Whenever the work slowed, he would strum and sing for folks at the station. One day (just before being fired for singing when he should have been tending the telegraph), humorist Will Rogers came through the station and encouraged Gene to take up singing professionally.

After being turned down by David Sarnoff's RCA (who had just signed two other 'hillbilly' singers), Autry began singing for local radio stations in Oklahoma to gain professional experience and eventually signed with Columbia. His first recording session was on an auspicious date, October 9, 1929, the day Wall Street crashed and kicked off the Great Depression. As bad as the timing seems, the Depression was good for Autry, his core audience seemed to expand and they were able to scrape together enough money to keep buying his records.

Autry signed with Mascot Pictures (soon to be taken over by Republic) in 1934. At first, his problems were the opposite of John Wayne's playing "Singin' Sandy"; Autry could sing but had little experience with the Cowboy arts like roping, shooting, or, especially, horsemanship. Critics also noted that he lacked the 'sex appeal' of the Duke and other Western matinee idols. This may have worked in Autry's favor because an important component of his audience were young boys for whom girls and "kissin'" would have been considered "icky".

A 15-minute audition program for what would become Gene Autry's Melody Ranch was broadcast on December 31, 1939. The Wrigley Chewing Gum Company picked up the sponsorship and the show began regular broadcast on January 7, 1940. To their credit, Wrigley thought enough of the program to hold on the time-slot even when sugar-rationing during the War made it impossible to produce its highly sweetened product and when their Star enlisted in the AAF and was assigned overseas.

The show's format remained the same for its entire broadcast run; a few songs including at least one 'Cowboy Classic', some comic banter between Gene and his regular players, and a dramatic story told/performed by Gene. Realizing that the program was becoming a touchstone for younger audiences, Gene came up with "The Cowboy Code" which taught younger listeners that "The Cowboy must never shoot first, hit a smaller man, or take unfair advantage," "He must not advocate or possess racially or religiously intolerant ideas," "He must keep himself clean in thought, speech, action, and personal habits," and "The Cowboy is a patriot."

The show was normally broadcast from the KNX Playhouse on Columbia Square at Sunset and Gower in Hollywood. The December 7, 1941 broadcast was delayed as news of the attack at Pearl Harbor was aired, most of the company at the KNX Playhouse had not heard the news previously but still managed to fill the remaining airtime with quality entertainment. Another notable broadcast came on July 26, 1942, when Autry took his Oath of Enlistment in the US Army Air Force on the air.

Air Force songs took the place of most of the Cowboy ditties and the program was retitled Sergeant Gene Autry (a disclaimer was read that the USAAF did not endorse Wrigley's Gum, who had retained sponsorship). Already holding a private pilot's certification, Autry was determined to fly for his country and eventually became a Flight Officer and was assigned to the Air Transport Command. Wrigley retooled the show while Autry flew C-109 transport aircraft (essentially a B-24 Liberator modified to carry fuel loads) across "the Hump" of the Himalayan Mountains to support B-29s bombing Japan from China.

After mustering out of the Service, Gene Autry returned to The Melody Ranch broadcasts on September 23, 1945. Wrigley began cutting back on the budget and eventually, on May 6, 1956, dropped their sponsorship completely. By this time, KTLA TV was broadcasting an hour-long TV version of Gene Autry's Melody Ranch.