This collection includes radio appearances by "The Duke" in such shows as Lux Radio Theater, Screen Director's Playhouse, and more.

Choose your CD format
or order disks individually: Add to Cart Add to wishlist
Play a sample episode from August 05, 1949: 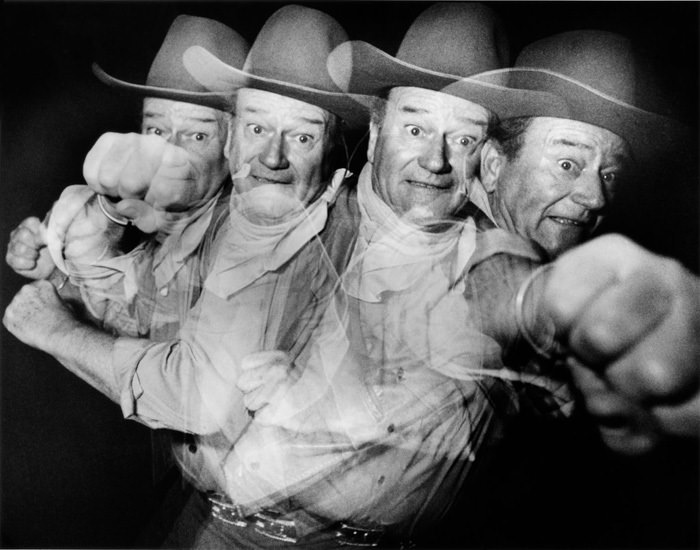 John Wayne is an American icon in entertainment history.  Best known for his roles in western films, he embodied the tough, honorable American spirit.  A prolific and hardworking actor, he appeared in nearly 250 movies, 142 were leading roles.

John Wayne was born with the less than tough sounding name, Marion Robert Morrison, in Iowa.  His family moved to warm climate of Southern California where his father was employed as a pharmacist.  As a boy he had the nickname "Little Duke" because he never went anywhere without his best bud, a large Airedale Terrier named Duke.  While a teen he worked as a soda jerk in an ice cream shop and was the high school's superstar football player.  He earned a scholarship to USC, but after an injury while surfing he lost his scholarship and had to drop out of school.

He began working as in props at the film studios studios and with Tom Mix working his way to a starring role was in the western, 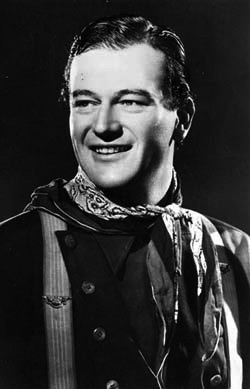 The Big Trail (1930).  The studio changed his screen name from "Duke Morrison" to "John Wayne."  His pay was raised and he was given more film opportunities.  Working with famed stunt coordinator Yakima Canutt, John Wayne learned how to fall off a horse without dying.  Wayne also mimicked Canutt's walk, slow speech, and demeanor for his western roles.  After performing in smaller films, his friend John Ford cast him in Stagecoach and a string of western films, Fort Apache (1948), She Wore a Yellow Ribbon (1949), and Rio Grande (1950).

John Wayne was a conservative Republican and made films to glorify American History including westerns, WWII films, and police dramas.  He was a supporter of the Vietnam War and was staunchly critical of draft dodgers, which made him unpopular with young people during the era.  In 1974, The Harvard Lampoon gave John Wayne the "Brass Balls Award" for his "Outstanding machismo and a penchant for punching people".  At large framed 6'4", he was known for punching people both on and off the set, including his friends usually in "good fun." This collection includes radio appearances by "The Duke" in such shows as Lux Radio Theater and Screen Director's Playhouse.  Also included is a blooper of a drunken Duke criticizing the audience and saying the memorable line after applauds:

"I'm not trying to talk for clapping, I'm trying talk for you guys, you better start thinking…if you don't start thinking as men, we're going to have a lousy country."

John Wayne's first film role was as "Singin' Sam", but his singing voice and guitar playing were both dubbed on the silver screen.

In 1964, he had his lung removed due to cancer.  He went public with his illness and urged Americans to get early screenings for the disease.  In 1979, his cancer returned and he died asking his tombstone to read "Feo, Fuerte y Formal", a Spanish for "ugly, strong and serious" (his grave was unmarked for years).  Noting the correlation between cigarette smoking and his cancer, his will stated that no scenes of him smoking could be shown again.