the daughter of President Harry Truman, Margaret Truman was a singer and performer in the 1940-1950's and later an author best known for her crime fiction in the 1980s.

Choose your CD format
or order disks individually: Add to Cart Add to wishlist
Play a sample episode from December 03, 1950:

"Margaret Truman on the Big Show"

Tallulah Bankhead may have said all there is to say: "Margaret Truman is just like any other normal American girl whose father is President." The occasion was Ms. Truman's first appearance on The Big Show. 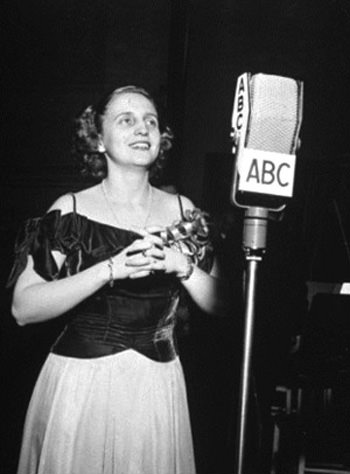 Harry Truman and Bess's little girl was born on Feb 17, 1924, in Independence, MO. The Truman's married late in life and little Margaret came into their lives when they were 39 and 40. When she was just 10, the family moved to Washington when Harry was elected to the senate.

Margaret had a life of privilege. She matriculated at George Washington University in 1942. She took operatic training and made her performance debut on a radio recital. Perhaps because of her connections the critics were not always kind. When Washington Post music critic Paul Hume panned her, saying she was extremely attractive on stage... [but] cannot sing very well the President Harry Truman felt he needed to step in: "Some day I hope to meet you. When that happens you'll need a new nose, a lot of beefsteak for black eyes, and perhaps a supporter below!"

Margaret was entertaining enough to land several guest spots on The Big Show, beginning in December of 1950. While working on the show she was befriended by fellow Missouri native, Goodman Ace. Ace helped her with showbiz pointers, and the friendship carried onto Margaret's joining the team on NBC's Monitor program in 1955. Ms. Truman was paired with Mike Wallace, doing stories for the female listening audience.

In 1956, she married New York Times reporter Clifton Daniel. She had writing ambitions of her own, publishing a critically acclaimed biography of her father just before his death, and a personal biography of her mother which included a behind the scenes look at life in the White House. She began writing fiction in 1980 with a series of murder mysteries set around Washington DC.