One of the most flamboyant and beloved characters in Showbiz, Liberace presented "classical music with the boring parts left out."

They say that the mark of true celebrity is to be known by a single name. In the case of our current subject, it may have been a matter of having a first name nearly impossible for general audiences to pronounce.

Władziu Valentino Liberace came into the world on May 16, 1919, part of a set of identical twins, although his brother was stillborn. His mother was a pianist daughter of Polish immigrants while his father immigrated from Italy and played French horn for the Milwaukee Symphony Orchestra. Although they were a musical family, brother George played the violin and sister Angie was a pianist, music lessons were seen as an unnecessary and expensive luxury by their mother. Little Władziu, known as Walter by his family and Lee by his friends, began to play the piano when he was four and was soon able to play complex pieces by ear. 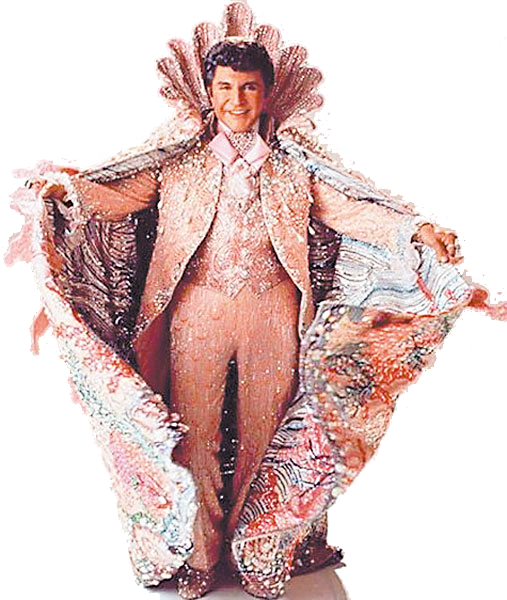 The Liberace family faced difficult times during the depression, but Liberace was able to earn some money playing in theaters. He had a slight speech impediment which made him a target for bullies. This made his music an important refuge and he began playing semi-professionally, sometimes going by the name "Walter Busterkeys".

Concert pianist and former Prime minister of Poland Ignacy Paderewski was a friend of the family and advised that Władziu had the best shot at becoming a star in the music business. He further recommended that he go by just his last name. Liberace trained in classical piano was invited to solo with the Chicago Symphony and joined the Works Progress Administration Orchestra. This helped him win a four-year scholarship to the Wisconsin College of Music.

After College, Liberace began to develop what would become his signature style. In 1939, after a classical concert in La Crosse, Wisconsin, he was called for an encore and choose to plat the popular novelty tune, "Three Little Fishies" with a decidedly classical flourish. Through the early Forties, Liberace moved away from straight classical performances, billed as "Pop with a bit of Classics". Liberace himself described the style as "Classical music with the boring parts left out".

This stymied the critics who complained that Liberace was too Pop for Classical listeners and too Classical to be Pop. Mostly, he was too flamboyant to be considered a serious artist. Liberace's signature candelabrum was a nod to the Chopin biographical film, A Song To Remember (1945, Columbia Pictures starring Paul Muni and Merle Oberon). He also purchased an over-sized, gold-leaf encrusted, Blüthner Grand Piano that he had carried with him on tour. A Liberace trademark over the years became performing with ever more extravagant pianos.

After settling in North Hollywood with his mother in 1947, Liberace became the darling of the local nightclub set and was also in demand for swank private parties hosted by Stars like Rosalind Russel, Clark Gable, Gloria Swanson, and Shirley Temple. Guest appearances on radio and early TV programs helped to boost his popularity, but Liberace became a household name when The Liberace Show began to weekly grace the small screen in 1952.

Liberace left the earth plane for the great sparkling piano in the sky on February 4, 1987. Two Stars on the Hollywood Walk of Fame were dedicated honoring Liberace, one at 6527 Hollywood Blvd for Contributions to Recording and the other for Television at 6739 Hollywood Blvd.