Enjoy the sounds of the skoocherphone and the tuned smokestack when you listen to the Korn Kobblers, America's most nonsensical band. 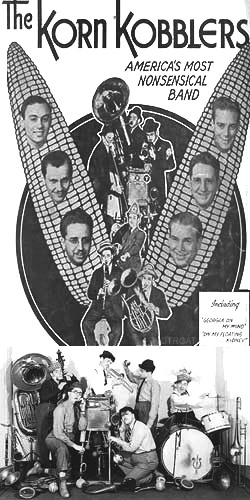 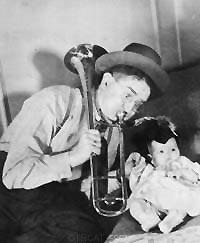 Billed as "America's most nonsensical band", The Korn Kobblers  were part comedy act and part big band. In addition to traditional musical instruments, they added their own self-invented instruments like the skoocherphone and the tuned smokestack; not to mention the one instrument no hill-billy band should be without, a washboard.

Originally part of Freddie Fisher's Schnickelfritz Band, the Korn Kobblers split from the Schnickelfritz Band when they headed west to Hollywood, and The Korn Kobblers headed east to a successful radio career. Much of the band's comedy was visual. Their characters were hill billies so they dressed as the common idea of a hick in overalls, flannel shirts, and floppy hats. They also dressed in drag or had funny props to go along with songs they were singing.

The band was made up of members

The Korn Kobblers were discovered in 1939 by, of all people, Guy Lombardo at the Old Vienna in Cincinnati, OH. They opened for Lombardo when he played the 1940 Wold Fair. During their run, the group appeared on 200 radio station plus made several short movies and recorded several albums. See also: Spike Jones.