He could have been a professional baseball player, instead, rubber-faced Joe E. Brown became one of the most successful comedians of the Thirties.

Choose your CD format
or order disks individually: Add to Cart Add to wishlist
Play a sample episode from March 24, 1939:

On the surface, Hollywood movies and baseball seem to have very little in common. Both can produce edge-of-your-seat drama, and baseball has been the inspiration for some terrific movies, but fans realize that baseball is a "thinking man's game". Except for a few exciting moments which seem to come out of nowhere, for the uninitiated, watching a baseball has an appeal on the level of watching paint dry. Motion pictures, on the other hand, tend not to demand a lot from their fans. In fact, Hollywood has often been accused of playing to "the lowest common denominator" in order to sell tickets. 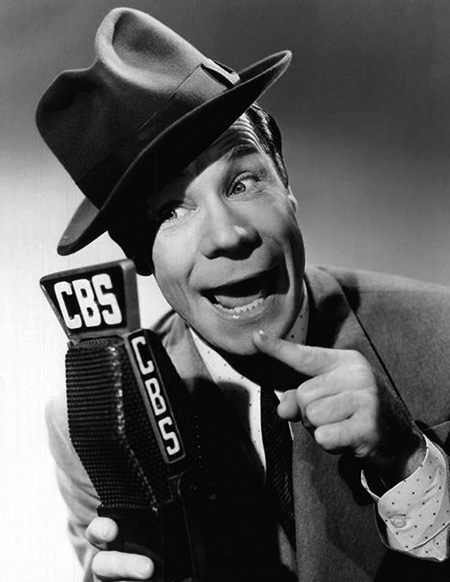 One factor that baseball and the movies share is that they are both much more fun to watch if the fans get to know the personalities involved. Joe E. Brown could have become one of the most interesting personalities in baseball, but he turned down a contract with the New York Yankees to pursue a career in entertainment.

Joseph Evans Brown was born near Toledo, Ohio, 1891. At the age of nine, he joined "The Five Marvelous Ashtons", a tumbling troupe who toured the country on both the circus and the vaudeville circuits (Brown joked that he was the only kid on the circuit whose parents encouraged him to run off and join the circus). The troupe broke up after a West coast engagement during the 1906 San Francisco Earthquake. Returning home to Toledo, Joe played a couple of seasons in the semi-pro Trolley League before rejoining the vaudeville circuit. The acrobatic act he was working with, The Bell-Prevost Trio ("I was Trio" joked Joe) broke up when Bell injured himself. Joe continued to tour with the aging Prevost who encouraged him to add patter and comedy to their routine. Approaching 40, Pre needed all the breaks he could get.

Joe continued to play semi-pro ball in the summers when many vaudeville houses were closed. On Christmas Eve, 1915, Joe was married to his sweetheart, Kathryn McGraw, whom he had met on a train to Oakland for a vaudeville engagement. Kathryn soon became pregnant, and although Joe was playing minor league ball for the Yankees organization, he decided that showbiz offered a more secure future. He began to appear in Broadway revues in 1920 and was signed with Warner Bros in 1928.

The rubber-faced Brown was immensely popular with juvenile audiences and shot to stardom after appearing in On With the Show (1929), the first all-color, all-talking musical comedy feature film. In 1932, he appeared in the first of what would become known as his "baseball trilogy", Fireman, Save My Child.  Brown's other two baseball films were Elmer the Great (1933), and Alibi Ike (1935), both based on Ring Lardner stories. The plot of all three films entails our ball playing bumpkin hero being led astray by a slick big city girl, usually into the clutches of gangsters who want him to throw the big game. 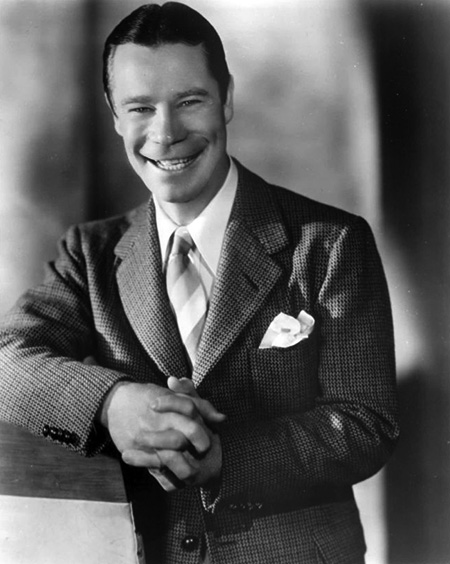 Joe was also one of the few vaudeville comedians to be featured in a Shakespearean movie when he appeared in A Midsummer's Night Dream (1935) with Olivia de Havilland, Mickey Rooney, James Cagney, and Dick Powell. Brown even rewrote the Bard's work: after playing his flute he was thrown into a lake, after which he spluttered an ad-lib "I won't play anymore!" The bit was not edited out and was the only non-Shakespearean dialog in the film.

In 1939, Joe testified before Congress in support of a bill which would allow 20,000 German Jewish refugee children into the country. He and Kathryn later adopted two Jewish refugee girls. After leaving Warner Bros, Brown's popularity began to fade and he appeared mostly in B-military. The younger, Capt. Don E. Brown, was killed in a flight training accident. Joe sought solace by entertaining as many troops as he could, often traveling to overseas outposts at his own expense before the USO was organized (he beat Bob Hope to be the first to appear in Alaska and the Caribbean). Joe E. Brown was one of only two civilians to be awarded the Bronze Star for their service in WWII.

His best remembered post-War appearance was as the aging millionaire, Osgood Fielding III, in Some Like It Hot (1955). He delivered the punchline at the end of the film: "Well, nobody's perfect" when Jack Lemmon removed his wig, revealing that he had been in drag. A Star on the Hollywood Walk of Fame at 1680 Vine St was dedicated in 1960 to honor contributions to Motion Pictures by Joe E. Brown. He died of arteriosclerosis in 1969.