Joan Davis Guest Appearance Collection: Joan Davis spent her entire life in showbiz, working in vaudeville, movies, radio, and television, and was called "the funniest woman in the world".

Choose your CD format
or order disks individually: Add to Cart Add to wishlist
Play a sample episode from December 03, 1945: 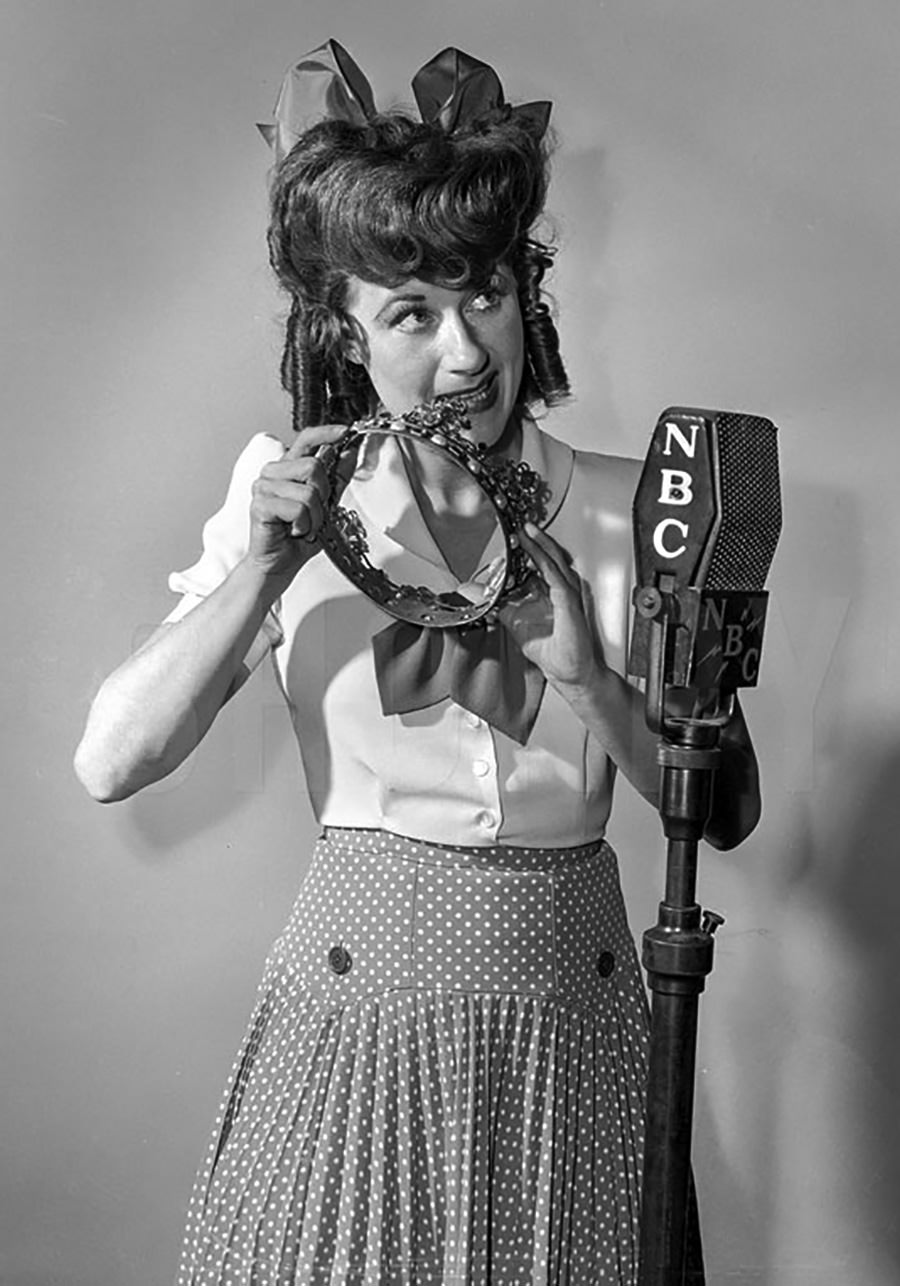 Appearing in B movies and in the popular TV series I Married Joan, Joan Davis could have been called the queen of radio comedians. Willing to do anything for a laugh, Joan was even tapped to take over hosting duties when Rudy Vallee joined the Coast Guard.

Popular radio and television comedienne, Joan Davis excelled going to great lengths to make an audience laugh with her distinguishing voice. Davis was born in St Paul Minnesota in June 1907; she excelled at vaudeville comedy as a girl. With the waning popularity in the vaudeville format in the 1920s and the rise of film, Davis and her small family including husband-comedian Wells and daughter moved to California in search of stardom. She was briefly contracted under the Fox studio, but was more successful as a freelance artist and eventually lead to the creation of The Joan Davis Show that dubbed her the "Queen of Comedy. 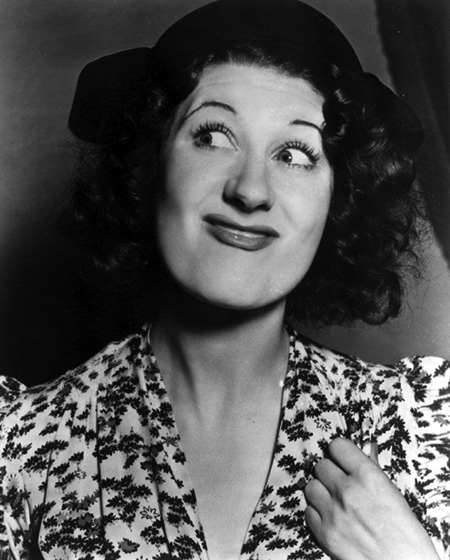 With her squeaky rising-tide over-the-top voice, Joan Davis is a smash-hit in The Joan Davis Show. Davis originally appeared on the Rudy Vallee Show, and quickly became a regular wacky female wolf after Rudy's heart. When Rudy Vallee left his show in 1943, Joan Davis took over with great success. It was obvious that she was a hit. With a thousand strikes a minute, The Joan Davis Show will hit you hard right on the funny bone!

There are essentially two kinds of comedians working in show business. The most common, sadly, are what we will call tragic clowns. These are the ones who use comedy as a coping mechanism, they laugh and make others laugh as a way of dealing with the sadness in their own lives. Some show people will argue that all comedy, clowns, and comedians work from this premise, but it would be nice to believe that there are funny people out there who make people laugh just because they enjoy making people laugh. These "natural" comics would have had a happy, or at least not tragic childhood, would have come from a happy home, and would achieve stardom the old-fashioned way, by being talented and working hard.

By all indications, vaudevillian and B-movie comedienne Joan Davis was one of the natural comedians. She seems to have enjoyed a generally happy life with no more than usual sorrows. Joan's story is touched by two tragedies, but it is hard to say that they detracted any happiness from her own life. The first of these was the fact that she was taken from her fans and her family much too soon, but, perhaps, the more tragic episode of Joan Davis's story happened after she passed away.

Born Josephine Davis, the only child of railroad dispatcher LeRoy Davis and his bride, Nina Mae (nee' Sinks), 1912. She began joking and performing for friends and family nearly as soon as she learned to talk, and was on the vaudeville circuit as a child, billed as "The Toy Comedienne". By her late teens, she had performed on most of the major vaudeville circuits in the country. In 1931, she met veteran straight man and gag writer Si Wills, and they put together an act as "Wills and Davis". The couple married in the summer of 1931, and two years later, daughter Beverly was born. Soon thereafter, Joan made the decision to try her luck in Hollywood pictures.

Her first role was in the Mack Sennett short Way Up Thar (1935), and Sennett's distribution company, Twentieth Century Fox, signed her to a contract. Fox used Joan in a similar fashion to Eve Arden at Warner Bros, as comic relief for some of their more glamorous Stars. She backed up Alice Faye in several films, including On the Avenue (1937), Wake Up and Live (1937), Tail Spin (1938), and Sally, Irene, and Mary (1939).

Joan was best known for her physical humor, so it is somewhat surprising that she made as big a splash on the radio as she did. Her first on-air experience was as a guest on Rudy Vallee's Seal Test Show in the summer of 1941. She became a popular guest there and on other programs, and when Vallee joined the Coast Guard in 1943, his show was retitled The Sealtest Village Store and Joan was called as the new host. She left Sealtest at the end of the 1945 season and in the fall started on CBS with Joanie's Teashop. The head writer on Teashop was Abe Burrows, co-creator of Duffy's Tavern, where Ms. Davis also made several guest appearances. 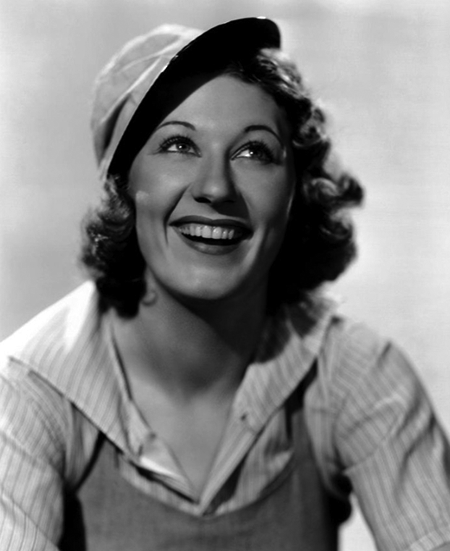 During the War years and beyond, Joan was a popular guest on Command Performance and other AFRS favorites. She became a regular on Tallulah Bankhead's The Big Show and made several appearances on Time to Smile. There were reports that Joan and Eddie were having an affair, she and Si Wills had separated in 1947, and Joan made two films with Cantor, Showbusiness (1943) and If You Knew Susie (1949).

As the Forties drew to a close, Davis quickly realized that TV was going to be the coming thing, and she jumped in with both feet. Typically, she made fewer radio appearances, but she also gave up her film career (1952's Harem Girl was her last big screen offering.) Radio had been lucrative enough for her that she was able to start her own production company. Given CBS's 1951 success with I Love Lucy, NBC saw the Davis-produced I Married Joan as fulfilling the same formula. Jim Backus paying Joan's long-suffering husband and Davis's daughter Beverly Wills was cast as Joan's younger sister. Joan Davis Enterprises even hired her ex-husband Si Wills to write for the show. Between Ball and Davis, many later critics feel Joan was a more convincing scatter-brained wife, but Lucy was the hands-down winner in the rating wars.

I Married Joan was canceled after three seasons, not so much because of ratings but because Davis was beginning to experience heart trouble. Joan Davis suffered a fatal heart attack at her home in Palm Springs, California, on May 22, 1961. She was just 48. Soon after Joan's passing, daughter Beverly and ex-husband Si Wills began disputing the disposition of Davis's million-dollar estate. The courts finally ruled in Beverly's favor. Si passed away in 1977. Tragically, Beverly Wills fell asleep in her own Palm Springs home while smoking a cigarette on October 24, 1963. Her two sons and Davis's mother were in the house at the time, all were killed in the ensuing blaze.

Two Stars on the Hollywood Walk of Fame are dedicated honoring Joan Davis, one for Motion Pictures at 1593 Vine St and the other for Contributions to Radio at 1718 Vine St.