The Inside Track (AFRS)

Hessler interviewed coaches, managers, ball players, scouts, and individual athletes about trends in their sports and what it takes to be great in each competition.

When the call to service comes, American men have always been quick to answer. However great the danger, how imminent the attack, or how vital the mission, it is a fundamental military truth that the troops are going to have a lot of time on their hands while they wait for the action. Even in combat, troops spend most of their time waiting (at high levels of alert) for something to happen.

What do our fighting men do during these periods of downtime? They might take a few minutes to maintain their gear, or write a letter back home. Some might read a book or turn on the radio to listen to AFRS. If there are some balls available and room to run, they might get up a game. If there is a deck of cards or a set of dice, a game might begin which requires much less room. When the situation will not allow for these sort of activities, the men from different backgrounds from all around the country will simply talk to one another.

No matter where they are from, the first thing the young men are going to talk about is going to be girls. If they are American troops, sooner or later the conversation is going to turn to sports. 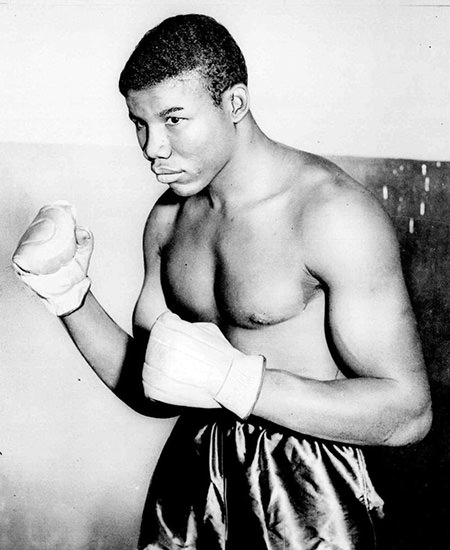 American men have been interested in discussing the results of athletic competition from the time newspapers began reporting the outcome of the contests. Those who made the programming decisions at the Armed Forces Radio Service was well aware of this, and whenever they could, sports programming was developed. Because of the delay between the time when AFRS programs were recorded and when the troops actually got to listen to the shows, play-by-play reporting of the latest games was impractical, however, the troops were happy to hear stories about great athletes from the past.

One popular post-War broadcast was The Inside Track, featuring San Francisco 49er's radio announcer, Fred Hessler. Hessler had been a navigator with the Army Air Corp during the War, and after his discharge settled in California where he got into broadcasting. For a time, Hessler worked part time at KMPC Los Angeles and at the AFRS studios. In the early 1960s, Hessler would become the voice of UCLA football and basketball, a position he would hold for the next 24 years.

For The Inside Track, Hessler interviewed coaches, managers, ball players, scouts, and individual athletes about trends in their sports and what it takes to be great in each competition. Sometimes the interview focused on great past performances while other times Fred was able to draw out a team's strategy for future success. His questions ranged from the coaching decisions of a professional football coach to why javelin throwers from Finland enjoyed so much success at the Olympics.