I Sustain the Wings

Choose your CD format
or order disks individually: Add to Cart Add to wishlist
Play a sample episode from February 05, 1944: 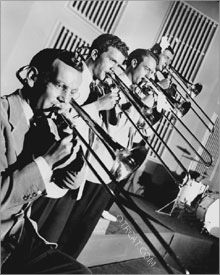 The project was part recruiting effort, part public relations, and mostly entertainment. Part of CBSs afternoon programming during 1943 and 1944 featured Service Bands from the different Armed Services. The purpose of the Service Bands was to be part of the Recruiting effort, but they became important for the musicians as well.

The American Federation of Musicians had been on strike against the major recording studios since July 31, 1942. This meant that the only employment available to musicians were live radio performances or concerts (after Oct 27, 1943, an exception was made for "V-Discs" which were recorded for the Troop use as part of the War Effort). 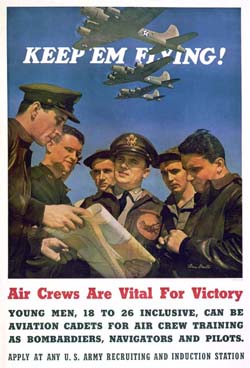 For many, Big Band Music was the "Sound" of WWII. However between the Music strike and the War drawing personnel from the ranks of the bands, the War had a negative effect on Big Band Music. One result of the Strike was that the Recording Companies began emphasizing the Singers (who were not party to the strike) as the Stars where the had formerly been seen as accessory to the band in recording.

When Band Leader Glenn Miller joined the military one of his first assignments was to form a large military marching band that would for the core of several service orchestras. One of these, The Band of the Army Air Force Training Command, was featured weekly as part of CBSs Service Band line up on I Sustain the Wings. From this core of musicians he was allowed to draw fifty to accompany him to England in the summer of 1944 where they gave at least 800 performances. The Orchestra of the AAF Training Command continued the weekly CBS broadcasts.

On Dec 3, 1944, Miller (who had been promoted to Major while in England) arranged to fly to the Continent to set up a concert tour for Band at several Allied Camps. His flight disappeared over the English Channel, and Major Miller was listed as Missing In Action.

See also: It's Maritime, Fighting AAF, and Wings to Victory.