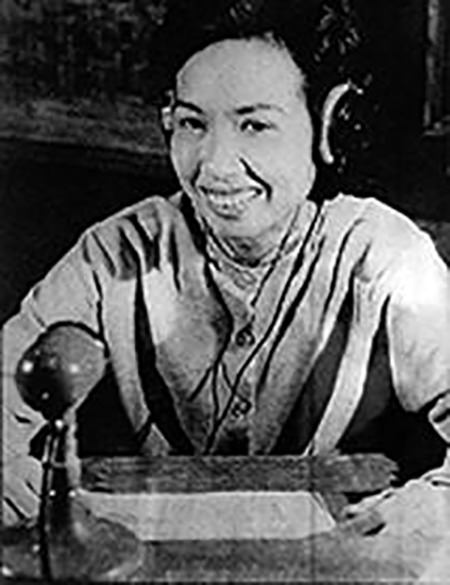 Trihn Tri Ngo was born to a rich family in 1931. She wanted to learn English so that she could see her favorite movie, Gone With The Wind without subtitles. The private lessons led her to a job reading an English language newscast over Vietnam's state radio service.

During WWII, the American military discovered that radio could be an indispensable tool for spreading information and boosting the morale of the troops. It was a tool that the enemy did their best to exploit, as well.

During the Second World War, the troops got an ear-full from Axis Sally and Tokyo Rose. During the Vietnam War, the North Vietnamese followed a similar tactic by having Trihn Tri Ngo play popular American Rock & Roll records and spout propaganda. She took the name Thu Huong ("Fragrance of Autumn"), but the G.I.s quickly nicknamed her "Hanoi Hannah".

Like the troops in WWII and Korea, radio was a popular way for the G.I.s to relax in Vietnam. The Armed Forces Vietnam Network (AFVN) gave the troops approved listening content, but any sergeant can tell you that the troops are not always satisfied with "approved content".

Hanoi Hannah was able to get hold of more progressive rock and roll records than AFVN played, and she spiced her broadcasts with "news" the grew into a legend of omniscience. She read the names of dead and captured Americans within hours, and named individual units along with their location. Many believed that she "had spies everywhere", but most of her information was gleaned from sources like Stars and Stripes. When a group of soldiers heard Hannah name their unit, they gave her a "toast" by throwing their beer cans at the radio.

After the war, Ngo was offered a job in television, but chose to stay home with her ailing husband. She currently lives in Ho Chi Minh City with her family.