Gisele MacKenzie got her big break in Show Business by showing up Jack Benny on the violin.

Choose your CD format
or order disks individually: Add to Cart Add to wishlist
Play a sample episode from August 24, 1955:

In 1956, the Korean Conflict was beginning to fade into memory and most people had yet to hear about a place called Vietnam. Ike's warning about "the Military Industrial Complex" was still five years down the road. The "Ruskies" had the Atom Bomb, but our Armed Services were confident that they could be kept in check, so long as the Services got the funding and the Manpower they needed. As primary Atomic Warriors, the Air Force tended to get what they wanted from the Congress's financial committees and the Air Force Reserve Recruiting Wing thought they had a good solution for the manpower question. 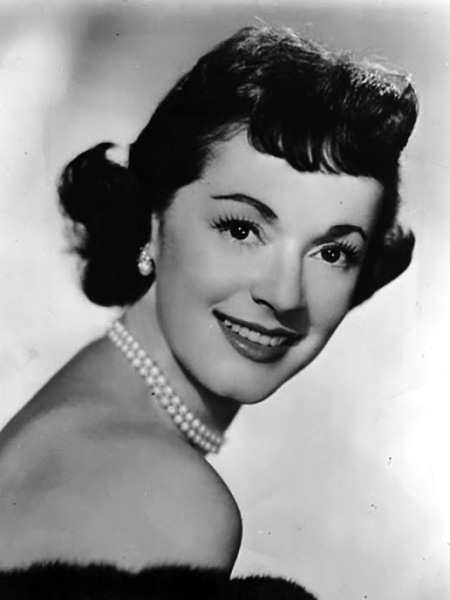 The Air Force Reserve made this deal: in exchange for one weekend per month and two weeks of training each year, Airmen could receive promotion opportunities, retirement and medical benefits, advanced training, and a chance to hang out with their buddies at the Air Base. It seemed like a good deal if they could just get the word out. One device they used to attract attention was syndicated radio music shows like Airtime which starred Miss Gisele MacKenzie.

A French-Canadian by birth, Gisele described herself as "the fat little girl from Winnipeg who never went anywhere without her violin case". Born in Manitoba, 1927, her father was a physician and her mother a piano teacher. Gisele was blessed with a sense of perfect pitch and her mother decided that she should become a violinist, forcing her to dedicate hours every day practicing. Whenever she got the chance, Gisele would go to the family piano to play and sing popular music, which her mother tried to put a stop to. She would be rescued by her violin instructor, who pointed out that her time with popular music would not interfere with the violin, and anyway, it made the girl happy.

Gisele credited the violin teacher's intervention with "saving her" from a career as a second-seat violinist with some symphony or another. As it was, she grew to resent the instrument for robbing her of the chance to play outside like other girls her age. He worked on two different shows, and in 1951 was invited to Hollywood to replace the Andrews Sisters on CBS's daily Club Fifteen program. Club Fifteen starred Bing's kid-brother, Bob Crosby, and Gisele rotated the singing duties with Jo Stafford.

Crosby introduced Gisele to his friend, Jack Benny, who insisted she play something on the violin for him. She had not touched the instrument in years but borrowed a fiddle and played "some pretty showcase stuff". Jack was impressed enough that he developed a bit for his TV show where he would allow Gisele to hold his violin so he could show her how to play. When she launched into a complex number, Benny assumed his "egg-on-the-face" expression and called out, "Fool around with ME, sister!"

On Benny's recommendation, Gisele was hired to sing on TV's Your Hit Parade in 1952. She became a naturalized US Citizen in 1955, and the following year hosted Airtime while continuing her duties on Your Hit Parade. She left the program the next season to star on NBC's The Gisele MacKenzie Show. She began appearing in musical theater productions during her summer breaks and in 1986 appeared on The Young and the Restless.

Gisele MacKenzie succumbed to colon cancer on September 5, 2003. She was 76. A Star on the Hollywood Walk of Fame at 1601 Vine St commemorates Gisele MacKenzie's contributions to Television.