Don Knotts got his start "playing straight man for a hunk of wood", winning crowds as his served in WWII. His characterization of nervous wisecrackers began while Don Knotts was serving in the Pacific during WWII.

There is an entertaining myth going around that during the Second World War, Don Knotts served as one of the most feared Drill Instructors at Marine Corps Recruit Depot Parris Island. Just imagine, the guy who Sheriff Andy Taylor would only trust with one bullet in the real-life role of "Gunny" R. Lee Ermey. The thought is so mind boggling that it must be true, but it is not. Knotts did serve during the War, and eventually became one of the most loved and respected figures in Hollywood, but he was hardly ever feared. 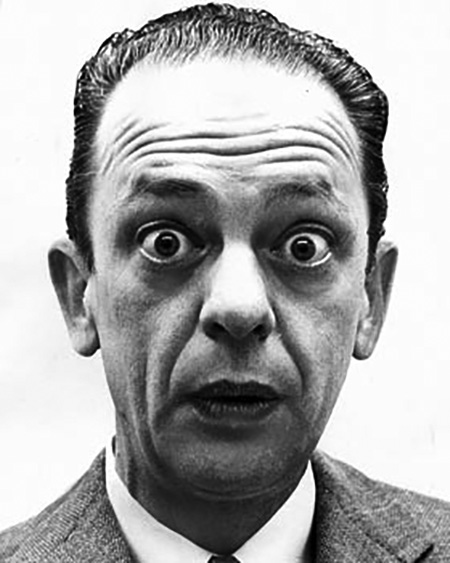 William Jesse Knotts had been married to Elsie Luzetta for nearly 25 years and had three grown sons when forty-year-old Elsie surprisingly became pregnant for a fourth time. Although she was delighted by the news, the thought of another mouth to feed on the hardscrabble plot he farmed outside of Morgantown, West Virginia, was too much for her husband to bear. When Jesse Donald was born in the summer of 1924, his father, already showing signs of schizophrenia and alcoholism, suffered a nervous breakdown. He eventually became bedridden, but not before terrorizing his youngest son, sometimes at knifepoint. By this time, Elsie had taken charge, moved the family off the farm and into Morgantown where she ran a boarding house. The old man died of pneumonia when Don was 13.

Perhaps as a means to bring her son out of the shell he had developed to protect himself from his deranged father, Elsie encouraged you Don to develop a ventriloquist routine which he performed at local church functions. After graduating from Morgantown High School, Don made his way to New York to win his fortune as a comedian and failed miserably. He returned to enter the University of West Virginia but was drafted into the Army after his freshman year. Obviously not front-line material, Private Knotts was assigned to the Special Services Branch and became part of a G.I. variety show called "Stars and Gripes". His act included a dummy named Danny "Hooch" Matador, and although he never saw combat, the show traveled through most of the Pacific Theater. After two years of "playing straight man for a hunk of wood", and at the end of the War he tossed "Hooch" over the rail of the troop ship carrying him home. He swore he could hear the dummy calling for help. Technician Grade 5 (Corporal equivalency) Donald Knotts was awarded the World War II Victory Medal, Philippine Liberation Medal, Asiatic-Pacific Campaign Medal (with 4 bronze service stars), Army Good Conduct Medal, Marksman Badge (with Carbine Bar) and Honorable Service Lapel Pin, and discharged on January 6, 1946.

Knotts used his G.I. Bill funds to complete his studies at the University of West Virginia, graduating with the Class of 1948. He moved to New York again, and with greater maturity and connections from his days with the Special Services Branch, this time he was able to find paying work and began to develop a showbiz career. He landed the role of "Windy Wales", a wisecracking know-it-all on Bobby Benson and the B Bar B Riders. On the air since 1932, Bobby Benson was one of the earliest juvenile Westerns, but the format was in danger of falling out of favor and young audiences became more sophisticated. With the addition of comic characters like "Windy", the show continued to sell cereal until 1955.

Mac Hyman's novel, No Time For Sergeants was adapted for an episode of The United States Steel Hour and starred Andy Griffith as a no-nonsense farm boy who makes a mockery of Army Air Corps training. The episode was so popular that the screenplay was adapted for the Broadway stage (1955, 796 performances). Griffith reprised his role from television and Knotts was cast as Corporal Manual Dexterity in his Broadway debut. Griffith and Knotts became good friends, and most of the Broadway cast joined them in Hollywood when Warner Bros decided to put No Time For Sergeants (1958) on the big screen. 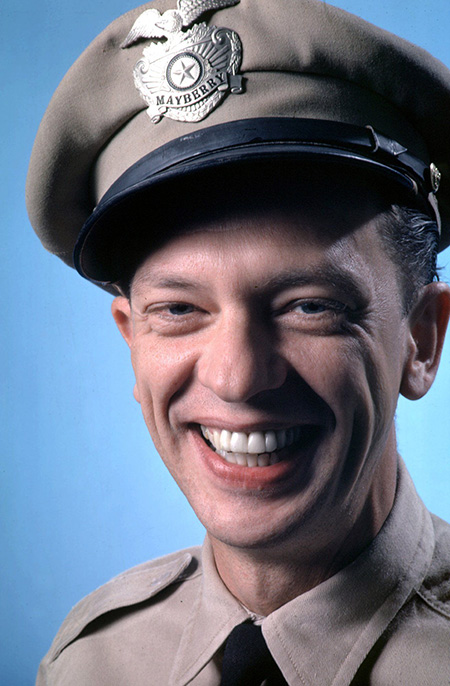 When Griffith was offered a chance to star in his own situation comedy on CBS, he tapped his buddy Don Knotts to play his sidekick. As originally conceived, The Andy Griffith Show was written giving Griffith the jokes and Knotts the straight lines but by the second episode, Griffith realized that the show was simply funnier if "Andy Taylor" played the role of problem solver, mediator, advisor, disciplinarian, and counselor to the slightly unbalanced characters around him, especially his deputy, Barney Fife, and son Opie Taylor (played by Ron Howard, who was Knotts' sixth cousin). Knotts signed a five-year contract with the show and was caught by surprise when Griffith announced that the show would have a sixth season. Although he had not signed any contracts, he decided that the time had come to move on, and he began pursuing a film career. He returned as a guest star five times in seasons six through eight, earning two Emmy Awards in addition to the three he received as a regular on the show.

Knotts had a cameo role in It's a Mad, Mad, Mad, Mad World (1963), and his first starring role was in the live action/animation feature The Incredible Mr. Limpet (1964). Beginning in 1975, he began a series of slapstick children's films co-starring Tim Conway, starting with Disney's The Apple Dumpling Gang (1975). At the beginning of the 1979 season, he joined the cast of the established ABC sitcom Three's Company. Star John Ritter later revealed that the cast was "so scared" to work with an established film star, but Knott's "Ralph Furley", a self-imagined lady-killer and macho man soon became a favorite character. In 1986, he reprised his Barney Fife role for the TV movie Return to Mayberry and he had a recurring role as pesky neighbor Les Calhoun on Griffith's Matlock series.

In 2000, a Star on the Hollywood Walk of Fame was dedicated to honor Don Knotts' contributions to Television. Don Knotts passed away on February 24, 2006, at Cedars-Sinai Medical Center after suffering pneumonia related to lung cancer. He was 81.