From Key West, Florida, to Havana, Cuba, is just over one hundred sea miles, an ambitious day's sail apart but close enough to be very important to one another.

Choose your CD format
or order disks individually: Add to Cart Add to wishlist
Play a sample episode from September 13, 1953:

Florida points south like a guiding thumb pressing down on the back of Cuba. Lying at the point where the Caribbean Sea, the Gulf of Mexico, and the Great Atlantic all meet, for centuries Cuba was the jewel of the Spanish Empire from the days of Columbus until the Spanish American War at the end of the nineteenth century. The island nation became a component of the Cold War after Communist Revolutionary Fidel Castro wrested power from the corrupt Batista regime.

Cuba had relatively little to do with the Cold War episode which brought the Superpowers closest to open Atomic Warfare, the Cuban Missile Crisis. The Island nation was merely the stage for a drama whose players were in Moscow and Washington DC. Despite Cuba's ties to the Soviets, Castro's revolution meant that for the first time since Columbus, the fate of Cuba and the Cubans were in Cuban hands, but these are events which would take place after the Old Time Radio era. 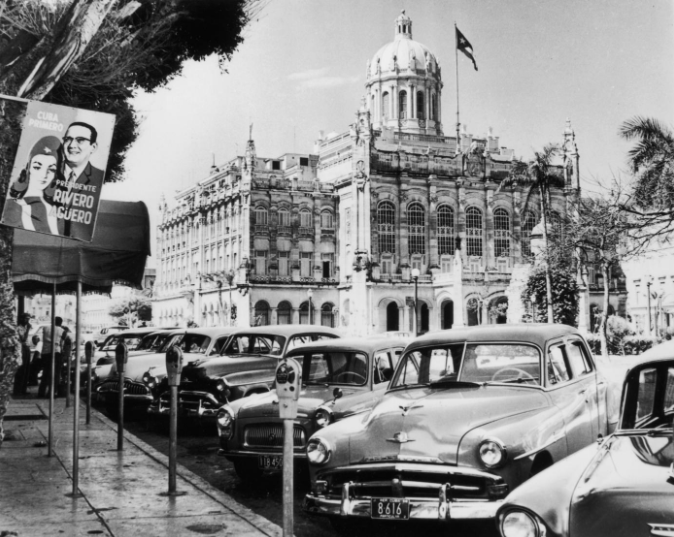 In 1898, the United States and Imperial Spain went to War over Cuban Independence. The events which ultimately led to the War had more to do with commercial interests and scandal-mongering than Patriotism, but in the decades leading up to the War Presidents Polk, Pierce, Buchanan, Grant, and McKinley had all made offers for the U.S. to buy the island from Spain. There had been numerous separatist movements arising on the island, but the Spanish Crown help on to the memory of how, over the centuries, it had grown rich as wealth from its Pacific Colonies crossed that great ocean, were carried over the Isthmus of Panama, and funneled with the riches of the Americas through Cuba before making the final journey across the Atlantic.

For all the wealth which would funnel through Cuba after 1492, the island was a hard place to live, work, or attempt to conquer. The indigenous peoples were farmers and fishermen, but they were wiped out by enslavement and European diseases within a few generations. Africans were forcibly imported as slaves. The politics of Continental Europe were eventually imported to the region. Proxy Warfare through piracy dominated the Caribbean for decades, although the treasure galleons which carried the wealth of the Empire were so heartily defended as to be practically untouchable.