Hailed as "the poet laureate of radio", Norman Corwin created this WWII collection featuring his brilliant writing on topics that mattered the most in his day.

Choose your CD format
or order disks individually: Add to Cart Add to wishlist
Play a sample episode from May 13, 2045:

"On a Note of Triump" Norman Corwin, often hailed as "the poet laureate of radio", was one of those rare artists whose genius was recognized in his own time. Corwin began his career as a journalist and settled in as one of CBS's most important writers before WWII. During the 1938-39 season, the Tiffany Network aired Norman Corwin's Words Without Music. 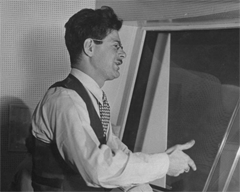 During 1941, Corwin was given complete control of The Columbia Workshop for a period of six months. Marketed as "26 By Corwin", the project required Corwin to conceive, write, cast, rehearse, produce and broadcast an original radio play every seven days. Perhaps Corwin's biggest triumph of 1941 was "We Hold These Truths", which had been written to celebrate the 150th anniversary of the Bill of Rights. Pearl Harbor was bombed a week before the broadcast was scheduled. Inquiring whether it would be appropriate to continue with the project with War news filling the airwaves, FDR himself said, "now more than ever". In 1942, the network sent Corwin to work with Edward R. Murrow reporting on conditions in wartime London in An American In England.

With war related work beginning to wind down, CBS was ready to begin taking advantage of Corwin's artistic prowess again. Columbia Presents Corwin was intended as a showcase of the writer/producer's work during the 1944 and 1945 seasons. The effort was not meant to be as intense as 26 By Corwin. In fact, several of the episodes over the two seasons featured reused scripts. 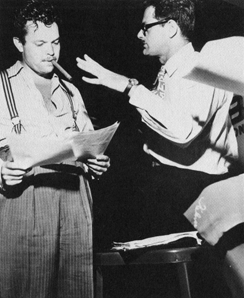 Both the reused scripts and the original episodes reflected the high standards of Corwin's writing. "26" had opened with a whimsical play called "A Radio Primer" that poked fun at the self-importance of the Radio Industry. For Columbia Presents, Corwin opened the series with "A Movie Primer". One of the lessons in this Primer was "K Is for Kiss. Kisses are where movies have it all over radio." The program reflected Corwin's wide ranging in social issues, along with the laughs. A series of three episodes explored world cities, Cromer, England, New York and Tel Aviv, and how the War affected them. An artistic highlight of the show was "An American Trilogy" featuring the works of Carl Sandburg, Thomas Wolfe and Walt Whitman.

The War was drawing to a close, and for Corwin there were still serious thoughts to think. The episode "Untitled" was a study of an average soldier who dies in battle for his country. "Home For The Fourth" explores the things that make America great, and why our boys were continuing the fight.

Corwin's most famous broadcast, "On A Note Of Triumph", was written and broadcast at this time but was not part of Columbia Presents. "A Note" was a celebration of Victory in Europe, but Corwin was well aware the job was not finished. "Fourteen August" was the VJ day broadcast and took the form of a soliloquy by Orson Welles. Welles acknowledged that victory came because "God and Uranium" were on our side. The original broadcast was only 15 minutes but was later rebroadcast with Welles and Olivia de Havilland. As the War ended, Corwin chose to close down the series and move on to other projects.

These recordings are also included on Volume 2 of the Corwin Collection.