Known as "the King of Western Swing", Wills was born on his daddy's cotton farm in east Texas.

Choose your CD format
or order disks individually: Add to Cart Add to wishlist
Play a sample episode from January 28, 1946:

There weren't that many cattle drives through the streets of Pasadena in 1953, but you would never have believed it if you tuned your dial to 1110 kHz, KXLA. The "big eleven-ten" was the on-air home to Tennessee Ernie Ford and Stan Freberg, and in 1953, Bob Wills and the Texas Playboys joined the lineup. 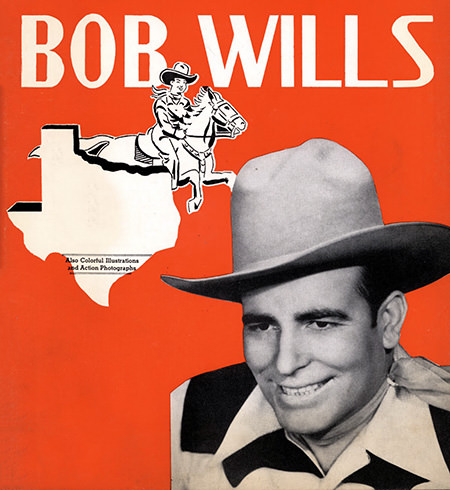 Known as "the King of Western Swing", Wills grow up with a true Jazz-man's background. Born on his daddy's cotton farm in east Texas, little "Jim-Bob's" father had been the state fiddle-playing champion. When they were not working in the fields, the family was playing music. The family frequently held country dances in their house with Bob playing mandolin and fiddle and his sister and brothers on other instruments.

Bob recalled that his siblings were the only white kids he played with growing up. Most of his playmates were the children of that the "Negro field hands" on the farm. He heard the Blues first hand while picking cotton on the farm. At the age of 16, he hopped a freight train to find his fortune. Traveling from town to town, he frequently found work in medicine and minstrel shows, and often appeared in blackface.

Even though he made his professional debut in black-face, Wills had a great deal of respect for his African American friends and there music. He told his daughter of riding on horseback to see Bessie Smith perform: "... She was about the greatest thing I had ever heard. In fact, there was no doubt about it. She was the greatest thing I ever heard."

In Fort Worth around 1930, he formed a fiddle band that was joined by vocalist Milton Brown. Future Texas Governor W. Lee "Pappy" O'Daniel hired the group and renamed them The Light Crust Doughboys for the radio program sponsored by his flour company. Brown left the group in 1932 to from The Musical Brownies. By adding tenor banjo, twin fiddles and a slap bass, the Brownies became the first true Western Swing band. In 1933, after becoming fed up with Pappy O’Daniel's authoritarian management (or Pappy becoming fed up with Wills' drinking), Bob left the Doughboys to form The Texas Playboys, modeled on the musical style of the Brownies. 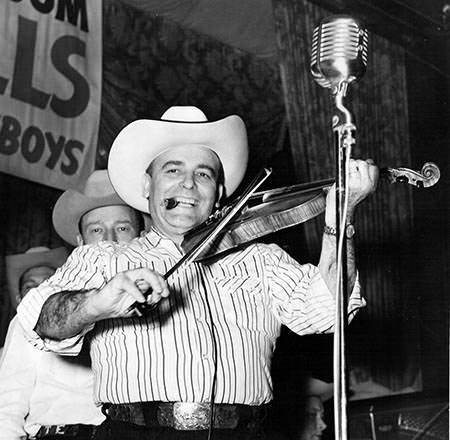 One notable characteristic of Bob's style was his hollering over the music. The iconic falsetto "Ahaa" in the background of many country hits is a throwback to his background singing with African-American singers in the cotton fields of his youth. Bob Wills and the Texas Playboys worked steadily from 1934, on the road, playing radio stations throughout the Southwest, and appearing in dance halls. In 1940, they appeared in Take Me Back to Oklahoma with Tex Ritter. The band began to break up as members joined the service after Pearl Harbor, and Wills joined the Army at the age of 37 in December, 1942, and received a medical discharge in 1943. After the service, he settled in Hollywood, appearing in a few more musical cowboy films and reorganizing the Playboys.

Electric guitars filled in for the horns used by mainstream swing bands, and for a time, Bob Wills and the Texas Playboys dances were outdrawing the likes of Tommy Dorsey and Benny Goodman. From his base in Fresno, Wills and his outfit toured California and the Pacific Northwest extensively, setting attendance records in several halls, including Portland’s Jantzen Beach. The Playboys appeared on The Grand Ol' Opry in 1944, even though their form of music raised more than a few Opry eyebrows. In 1948, Bob Wills and the Texas Playboys were featured on the inaugural broadcast of KWKH's Louisiana Hayride.

Although the popularity of Western Swing dropped off dramatically in the late fifties and sixties, Bob Wills continued to tour and was considered a pioneer. "Rock and Roll? Why, man, that's the same kind of music we've been playin' since 1928!... We didn't call it rock and roll back when we introduced it as our style back in 1928, and we don't call it rock and roll the way we play it now. But it's just basic rhythm and has gone by a lot of different names in my time. It's the same, whether you just follow a drum beat like in Africa or surround it with a lot of instruments. The rhythm's what's important."

Wills is credited with influencing the "Bakersfield Style" of Buck Owens and Merle Haggard, and has been the subject of tributes by Willie Nelson and the band Asleep At The Wheel. Still, he was a largely forgotten figure in Country Music at the time of his death. He suffered a series of strokes beginning in 1969, which prevented him from performing. Bob Wills died in Ft. Worth at the age of 70 in May, 1975.