Best remembered for My Friend Flicka, Anita Louise grew up with the movie industry, as a child actor in silent pictures, an ingenue in talkies, and a pretty mom and fashion plate on television.

Choose your CD format
or order disks individually: Add to Cart Add to wishlist
Play a sample episode from December 03, 1939: 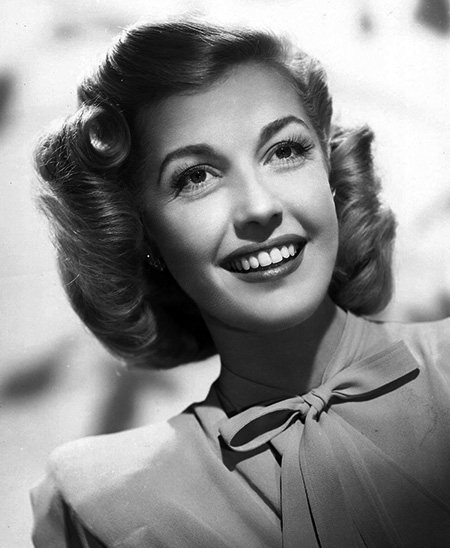 We feel a touch of sadness when we hear about the child Stars who sacrificed their youth to Hollywood's Studio system. There is a sense of sympathy that they may have lost a normal childhood by spending their formative years in the game of making money for the studio bosses. There are plenty of stories where the young star is forced to work like a dog while their parents lived a champagne and caviar lifestyle from the sweat of their children's brow and then were unable to make the transition to adult actor, but fortunately, that was not always the case.

Anita Louise was born in New York City in 1915 and had made her Broadway premiere with John and Lionel Barrymore and Constance Collier in an adaptation of du Maurier's Peter Ibbetson when she was just six. Within the year, she was appearing in films, with her official debut coming at the age of nine in The Sixth Commandment (1924). While many child actors were dropped when they entered their teens, Anita's delicate blue-eyed blond features kept her in demand through the rest of the silent film era and into talkies.

Although she would later complain that her looks prevented her from receiving any serious roles, Warner Bros kept her busy in a number of costume dramas like Madam Du Barry (1934), A Midsummer's Night Dream (1935), The Story of Louis Pasteur (1936), and Marie Antoinette (1938).

In 1940, Anita married Twentieth Century Fox producer Buddy Adler. Her career began to slow. Even though she was still in her mid-twenties and still maintained the ethereal beauty of her youth, all she could get were B-picture roles as "girlfriends, sisters, or daughters''. After Bulldog Drummond at Bay (1947), Anita essentially retired from acting.

Adler, sensing his wife's growing dissatisfaction as a housewife, thought a new television project, My Friend Flicka, the story of a boy and his horse. The show debuted in 1955 and only lasted one season, but it was carried in syndication for several years. Anita left the show when Buddy was diagnosed with lung cancer, which is said to be the reason it was canceled. She appeared in the lead-ins of several episodes of The Loretta Young Show when Loretta was recovering from surgery, and got to show off her extensive and fashionable wardrobe.

Anita did retire after Buddy Adler's death in 1960. In 1962, she married Henry Berger and dedicated her life to philanthropic causes, including the Auxiliary for the UCLA Medical Center. She succumbed to a stroke in 1970 and was buried in Forest Lawn, next to Adler.

A Star on the Hollywood Walk of Fame at 6821 Hollywood Blvd honors Anita Louise's contributions to Motion Pictures.